In what has been and is a weird year, the SHL finally kicked off the 2020/2021 season with four games on Saturday.

Due to the Covid-19 situtation about a third of the games originally planned to be played in the month of September has been pushed back to later stages of the season, which is why the schedule looks chopped up.

Nevertheless, on Saturday the 46th SHL season kicked off with four games. In Angelholm, we saw the highest scoring game when Rögle dismantled Linkoping in a 6-4 home victory in front of 50 people in the crowd. Adam Tambellini, who joined Rogle from HockeyAllsvenskan side Modo in the offseason, started his SHL career in great fashion, scoring one goal and adding three helpers. Oula Palve, one of Linkoping´s offseason acquisitions, opened the scoring before Rögle bounced back with two goals. Linkoping bounced back to tie the game before the home team went up to 6-2, scoring one in an empty net, before the guests could even out the score a bit. 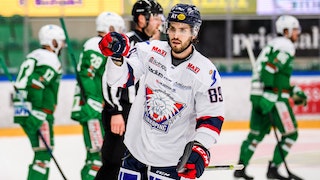 The result was, coincidentally, also the highest scoring result of the opening day last season, when Orebro overcame Farjestad with those exact numbers.

In the game, 19 year-old Rogle forward Adam Enstrom checked Linkoping forward Jarno Karki. The department of player safety deemed the hit as violent and uncontrolled hit and after review post-game, handed him a five-game suspension.

Leksand´s comeback earned them a point

In Leksand, Skelleftea looked to be playing with a chip on their shoulders off the start. In the first two periods, Skelleftea went four for four on the powerplay, earning them a 4-1 lead into the third. Leksand swapped goalies, from Axel Brage to Janne Juvonen, got their act together. They scored three goals in 5:30 minutes toward the end of the period, with the equalizer coming 8,9 seconds before the buzzer, and forced an overtime. For most of this OT, Leksand did control play, but Skelleftea came away with the two points thanks to a rush play by Andreas Wingerli. Wingerli (1-2--3), Philip Broberg (1-2--3) and Niclas Burstrom (1-2--3) all had three points for Skelleftea. Leksand signing Peter Cehlarik started his time with the team by also scoring three points; one goal and two assists.

Lulea only needed 3:53 minutes to break the deadlock against Farjestad, when Victor Berglund opened the scoring. The home team added another goal before the end of the first and was up 3-0 heading in to the third period, where Farjestad finally managed to sneak two pucks past goalie David Rautio. Albert Johansson assisted Daniel Viksten before he scored 3-2 himself. Karl Fabricius fired home the 4-2 goal in an empty net. Berglund was the only Lulea player with more than one point (1-1--2).

In Gothenburg, Frolunda aimed to start their season in great fashion, which is exactly what happened. With a high-speed game, they pushed HV71 deep into their own zone from time to time, outshooting their opponents 22-11 over two periods. In these two periods they scored three goals, one of which being a laser beam on the powerplay from Lucas Raymond. HV71 found their groove in the third period while Frolunda maybe sat back a bit, protecting their lead while also helping goalie Niklas Rubin to his fourth career SHL shutout.