With three big wins this week, the offense for HV71 now has them into the top six and now sit just two points back of the top three.

Coming into this weeks action, the team from Jonkoping was on a bit of skid. Having won just one game in their previous six, including a five game losing streak, HV71 were hoping for a big performance with three games this week.

They started their week with a tough test against Färjestad, a team who had beaten them in the previous two games this season. This one would turn out to be a bit of a wild game. Färjestad opened the scoring early in the first but HV71 would respond with a pair of their own to take the lead into the first intermission. HV71 then turned their offense up to 11 as they went on to score another six goals in the final two frames. Färjestad managed another three of their own, but HV71 was just to much for them. Coming away with the 8-4 victory, three HV71 players put up a pair of goals as Alex Bergström, Jesper Williamson and Martin Thörnberg all found the back of the net twice.

Their second matchup of the week was a road game as they went looking for their third straight win and also their third straight against Oskarshamn. The home team opened the scoring in just the second minute of the frame, but HV71 was able to answer back less than a minute later. Despite the quick start to the game, no more goals would be scored in the first or the second as the game headed to the third all locked at one goal a piece. HV71 would finally break the deadlock with a goal early in the frame. They then sealed the deal late in the third with an empty netter and came away with the 3-1 victory.

Their third and final game of the week saw them return home to host the Växjö Lakers in what would prove to be their best performance of the week. It took less than two minutes for them to open the scoring as Jusso Ikonen rippled the mesh to take the 1-0 lead. They'd follow that up with a pair of goals in both the second and the third. They also shut down the Lakers offense, holding them to just five shots in each of the first two frames. The Lakers did pressure in the the third with 11 shots, but all were turned aside by the shutout performance of Jonas Gunnarsson between the pipes. The 5-0 win was their fourth in a row and the full 9 points this week is enough to move them in to the top six. 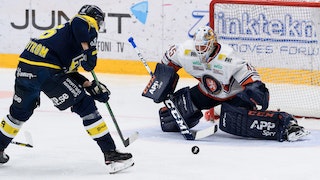 They'll have an opportunity to continue their streak when the league returns from the international break on February 11th.

Our game of the week this week came back on Thursday evening as Färjestad played host to Leksand. Coming into the game, neither team had had much recent success. Färjestad was on a five game losing skid and Leksand had won just one game in their previous four. Both previous matchups between these two teams had also been won by Färjestad, and so they were hoping to continue the trend.

Färjestad came out firing on all cylinders in the first as they peppered Axel Brage between the pipes with 16 shots on target, including a penalty shot attempt that was denied. They also held Leksand to just four shots of their own. The opening goal came about four and a half minutes into the frame as Färjestad were awarded a powerplay opportunity. Per Åslund moved into the offensive zone and fed Marcus Nilsson at the side of the net for the first goal of the game. Despite the extremely lop sided shot differential, Färjestad managed just the one goal in the frame and would carry the 1-0 lead into the second period.

The second period was more evenly matched on the shot clock, but Leksand still struggled to find the back of the net. Leksand found themselves down a man once again, and Färjestad capitalized once again. The initial heavy shot from Daniel Viksten was steered aside by Brage, but a big rebound caught him out of position and the Captain Linus Johansson was able to send it home to increase the lead to two. 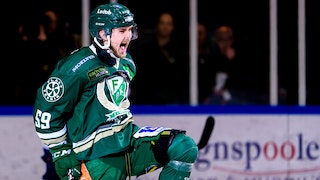 Leksand would finally get one on the board in the second half of the frame as Linus Persson cirlced the offensive zone and sent one out front to Sebastian Wännström who ripped it home to pull the game back within one. Färjestad, however, would answer back before the end of the frame, again on the powerplay, and took a two goal lead into the final frame of regulation.

The third would be another tight frame as Leksand would pull back within one just over three minutes into the period. Johan Franssons shot from the top of the cirlce deflected of the Färjestad defender out front and past Arvid Holm. Färjestad would answer back however, as a scramble out front left Axel Brage turned around and Linus Arnesson sent it home to regain the two goal lead. With the primary assist on the play Per Åslund registered his 300th career SHL point (regular season). Just a couple of minutes later, Leksand would be awarded a powerplay and this time, it was their tunr to capitalize on the man advantage. Jon Knuts was able to win the opening face off of the man advantage and a cross ice feed from Mattias Karlsson was one timed home by Daniel Gunnarsson to pull them back within one once again. Despite their best efforts in the second half of the third period, Leksand were unable to tie the game and fell 4-3 to Färjestad, their third straight loss against the team from Karlstad.

Luleå continues to sit untouched at the top of the standings with 79 points, 9 points ahead of 2nd place Färjestad and Frölunda rounds out the top three. Djurgården moves into 4th and Örebro falls all the way down into 5th. HV71's stellar week moves them into 6th overall. Just one point behind them is Rögle, and Skellefteå, Malmö and Växjö round out the top ten. Brynäs sits just three points out of a playoff spot in 11th and Linköping sits 12th. Oskarshamn and Leksand continue to remain in the bottom two relegation spots.