Approaching the end of his third season as Head Coach of Färjestad, Johan Pennerborn has been happy with the teams performance this season and is looking forward to the post season.

With just three games remaining in the regular season, Färjestad currently sits 3rd overall and are poised to have another successful finish. Although they won't replicate their 1st place finish from last year, Pennerborn says he is happy with the teams performance this year, especially considering the loss of a number of key players from last seasons squad.

Not only did they see massive changes to their roster in the offseason, Färjestad lost one of their leading scorers in December. Michael Lindqvist, who at the time had 13 goals and 12 assists in 26 games, went down with a severe knee injury that required surgery. This injury sidelined him for the remainder of the season. Despite losing one of their top offensive threats, Pennerborn says the team has adjusted well.

– That's also one of the reason why I'm happy with the teams performance this season. Daniel Viksten has stepped up into his spot really well. During his career Daniels always been scoring goals and points, but now playing with Marcus and Gustav hes performed really well I think.

Another, perhaps unexpected, bright spot for Färjestad this season has been the emergence of Arvid Holm. At just 21 years old, he has stepped into the role of the number one goalie for Färjestad quite well. In 29 games played he has posted a 2.25 goals against average and a .917 save percentage. Markus Svensson has not performed as well as he would've been hoped this season, but Pennerborn says he still believes Svensson has the capability to be a great goaltender.

– I think Arvid has performed well his first season here in the league. Marcus has the routine, he has the experience of playing in the big games, but he has not reached the level he has the capability of being on yet. I don't have the answer as to why he hasn't reached that level. He gives us the opportunity to win games, but he needs to improve and live up to his potential. It's also good for us to have two good goalies who I can count on any night. I'm very interested to see Holm over the next seasons, to see his development. 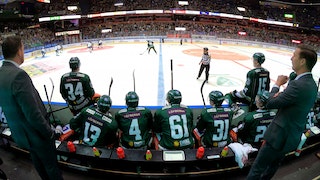 With just 30 North American skaters starting in the league this season and an additional 7 brought on throughout the year, the league has seen one of its lowest total of skaters from across the pond in 8 years. This drought of North American skaters, Pennerborn believes, is due to the competitiveness of other leagues around the world, the Swedish teams prefering to develop their own young talent and the lure of more money for top players.

– You know, you no longer have just the NHL and AHL, you've got the KHL, the Swiss league and it's a bigger window for everyone for those players coming over here. All the clubs in Sweden they're putting alot of money into developing their own players, and I think that's necessary for us here in Sweden. I wanna say this league is the third or second best in the world but when it comes to money we can't compete against Russia, can't compete against NHL, can't compete against Switzerland. So it's a tough situation.

Another issue within the league, in Pennerborns opinion, is the perhaps over eagerness and impatience of the young Swedish players in the league to try and make it in the NHL before they're ready.

– I also think alot of young Swedish players move out of the league too early, move over to the NHL and they can't make it and they get sent to the AHL. My opinion is that's not good for their development. I think also that the players have to take responsibility, they have to think about whether or not they're ready to make that change. Take Nygård for example, he waited for two seasons before going and he was ready for it. So the young players hurry it a little too much in my opinion.

With just three games remaining in the regular season, the playoffs are of course on everyones mind. Luleå has secured the 1st place finish and despite their dominance this year, Pennerborn believes that any of the top teams this season have the capability of raising the Le Mat trophy.

– I think there's an open spot at the end of the season, there are eight teams who could win, in my opinion. When I look at teams like Djurgården, Rögle, Luleå, Frölunda, I think there are alot of teams that could win. So I think it's really open, so I can't guess who will win. Of course I want us to win and go all the way, but I think it's going to be a really interesting playoffs this year.

In his fourth season behind the bench with Färjestads big club, and third as head coach, Penneborn says he has faced many challenges throughout his years in the league.

– I think for me and the whole organization, we've made big changes alot. Alot of players have been recruited from us, went to other leagues, we've shifted captains every year, so those changes are hard to adapt to. Having leaders in the teams is important too, Frölunda has Lundqvist, Luleå has Gustavsson, and we have changed our Captain three years in a row now. You always want to have a few players, 5 or 6 guys, who come back year to year and we've struggled to do that. 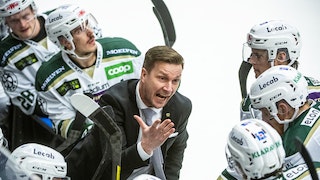 Having played the vast majority of his professional career with Sunne IK in Division 1 and Allsvenskan, coaching was something that Pennerborn had never really considered. Given the opportunity to coach in a tournament after his playing days were finished opened his eyes to a path that would allow him to stay involved in the game.

– I think I had one or two years away from hockey, but then I got asked to lead TV Pucken and during that tournament I started getting curious about being a leader, being a coach. For many years I also worked summer hockey schools. So I missed being part of a team and being part of the game. When I was playing, I never thought about, the desire started after I was done playing, but thinking about it now, it was one of the best decisions I've ever made.

His decision to pursue a career in coaching turned out well for Pennerborn, he had a single season in Division 1 and Allsvenskan, two seasons in J20 Elit and four seasons in Division 2. But in the 2014-15 season he was brought on as head coach of Färjestads U16 Elit team. In his two season with that team, they put up very impressive numbers. His first season saw them win 20 games and lose just 8, finishing 3rd overall in the regular season and his second season they had 21 wins and 7 losses and finished 2nd overall. This success translated quickly into an appintment with the big team for Pennerborn.

– I think the team wanted a guy who could develop individuals in the junior program and I think they saw that kind of leadership in me. So I blieve that's why they recruited me.

Getting away from the game is as important for the coaches as it is for the players. Hockey takes up almost all of the time in a coaches life during the season, but when he does get some time to himself, Pennerborn enjoys getting out into nature.

– I love to be in nature but I don't have as much time as I want to. But I always try to get out and do something everyday, take a run or play tennis or something like that. I like all sports, but if I have a day I'll go to the forest, make a fire, make some coffee over the fire and just be in nature. I love cross country skiing as well, but unfortunately I don't have the time to do that during the winter, I hope to one day do the Vassaloppet, but haven't had time yet.

Music Genre: I like most music, but I listen to Bruce Springsteen mostly

NHL Team: I have always love Foppa for Colorado and now Nygård for Edmonton, so I follow teams like that.

Dream Car: No, not important for me