With a new resurgence of COVID cases throughout multiple teams, the league has been forced to postpone a number of games over the past week. With many teams currently inactive, Färjestad has capitalized on their matchups and pushed into the top six with a good performance over the past seven days.

Their first matchup of the week and first league game day of the new year came on Thursday evening as Färjestad visited Örebro. Coming in to the game, the teams had exact opposite records over their previous five games. Färjestad had won four of five while Örebro had lost four of five. So both teams were hoping for a win, Färjestad looking to keep their hot streak intact and Örebro hoping to turn things around.

The first period yielded a strong start for the visitors as both Gustav Rydahl and Mikael Wikstrand were able to ripple the mesh for Färjestad. Despite outshooting their opponents in the first frame, Örebro would find themselves down by a pair heading in to the second period.

The second period saw Örebro outshoot Färjestad once again. However, unlike the first period, the shot clock was heavily in favour of Örebro and they were able to find the back of the net. Oliver Eklind was able to ripple the mesh with just over six and half minutes elapsed in the frame to pull them back within one. Unfortunately for Örebro, Färjestad would answer back, scoring on one of their six shots in the frame to restore the two goal lead heading in to the final frame of regulation.

The third and final frame would be much more evenly matched on the shot clock with both teams registering a couple of good chances. Örebro would be the only team to capitalize, however, as Robin Kovacs was able to pull them back within one with just over ten minutes remaining in the frame. Unfortunately for them, that is as close as they would come and Färjestad would hold on for the win, grabbing a full three points from the game. 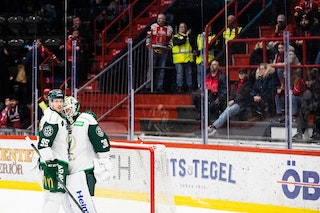 Saturday, once again, saw a number of games postponed, however the matchup between Färjestad and Rögle went ahead as planned. Rögle, sitting at the top of the standings, was hoping to put some space between themselves and second placed Luleå and Färjestad was looking to push past the Lakers into the top five.

The first period saw both teams get plenty of chances with Färjestad registering eleven shots on net and Rögle keeping pace with ten of their own. Despite the high number of shots and chances, both goaltenders stood tall and kept the scoreless tie intact through the first twenty minutes of the game.

The second and third periods would be much more lopsided on the shot clock. The second saw Rögle outshoot Färjestad 14-6 and the third saw a reversal as Färjestad outshot their opponent 10-4 in the final frame of regulation. Despite the lopsided shots and chances in the final two periods, both teams remained neck and neck as they both managed to score a goal in each of the final two frames. With neither team able to break the 2-2 deadlock before the final buzzer, overtime would be needed.

It took just one shot and twenty one seconds for Färjestad to end the OT frame as Gustav Rydahl would ripple the mesh to claim the extra point for Färjestad. With the win they now sit fifth overall with 51 points on the season, three ahead of Växjö.

The ageless Joel Lundqvist has signed on for yet another season of hockey in the SHL. Of course the signing is with his long time team Frölunda. Lundqvist, who turns 40 in March, is currently in his 19th SHL season.

– We have had a good dialogue. Joel came to the conclusion that he wanted to play another season. Fun and important - Joel means a lot to us, he is our great leader, says Frölunda's sports manager Fredrik Sjöström

In his tenure with Frölunda he has won four Swedish Championships, four CHL titles, scored 184 goals and registered 288 assists. His 842 games played has him sitting fifth overall in league history for most games played. He will likely move up to fourth by the end of this season and into third overall by next season, as long as he stays healthy. 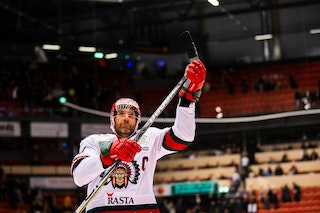 Filip Sandberg has returned to Sweden after starting the season in Finland. Leaving the league last year after the relegation of HV71, Sandberg played 31 games with TPS scoring 4 goals and 12 assists.

– It's going to be great fun! I had a challenging season last year so I have a lot of revenge for not getting that feeling again and want to be able to turn it into something positive and I think I can do that in Skellefteå, so I look forward to that, says Sandberg

Sandberg came up through the junior program in HV71 and spent his entire SHL career with them. So this will be his first taste of SHL action with a different team.

Djurgården has parted ways with Josef Ingman. The 26 year old had 26 games played with the team from Stockholm this season after coming over from Brynäs.

– We can see that his ice time due to the changes in the squad will be limited in the future. Based on that, Josef has expressed a desire to leave to seek more ice time, something we have agreed to, says Djurgården's acting sports director KG Stoppel

One of the changes in the Djurgården squad is the addition of American Cameron Schilling. The 33 year old has spent the vast majority of his career in the AHL, with brief stints in the NHL.

– We have been looking for a full-back for a long time and with Cameron we get a solid two-way player. He has broad qualifications, has over time shown production going forward and has experience of strong figures in plus / minus - which has been important. In addition, it is a player who will be able to carry a lot of ice time, comments Djurgården's acting sports director KG Stoppel.

This will be Schillings first taste of European hockey and his contract is valid through 2024.

The Växjö Lakers have added some young talent to their blue line as they have signed 19 year old Czech defender Michael Krutil from the Rockford Ice Hogs of the AHL.

– Michael is a young promising defender who has his qualities in the defensive game. He is big, strong and mobile, a difficult player to face, says Växjö's sports manager Henrik Evertsson.

Krutil was drafted by the Chicago Blackhawks in 2020 and spent last season with their AHL affiliate. He also represented his home country at last years World Junior Championship.

Defender Adam Ollas Mattsson has inked a new deal with The Malmö Redhawks.

– We saw great potential in Adam when we chose to bring him here two and a half years ago and he has shown proof of that during his time with us. He has grown into a top defender in this league that can make a difference in all forms of play. We also believe that he can take further steps in our environment and it is of course very gratifying that he wants to stay with us and continue to be an important part of our team building, says Malmö's sports manager Patrik Sylvegård

This is Ollas Mattssons third season in Malmö and his new deal will see him remain with the team for at least another three seasons.