Dmytro Timashov came back to Sweden to regroup and restart. With Brynäs this season, that's exactly what he's done.

Sure, he played three games in the SHL, representing MoDo, back in 2013/2014. But this season, after having spent a little more than seven seasons in North America, Dmytro Timashov has made his mark in the SHL. It all began with two points, both assist, in his first game for Brynäs on November 18th.

"I had a contract with the Islanders and was on my way there. I’d decided that if I got sent down I’d go back. But where 'back' was, I didn’t know. I missed my family a lot so I wanted to come back to Sweden" he explains. "You’re in Sweden for about two months a year so it’s kind of nice to come back home and regroup. I know I can play in the NHL, I’ve done it. I’ve proven that I can. I mentioned in another interview that I wanted to get out of a certain drawer. It’s pretty much been decided for you the type of player you are supposed to be and I felt I’m not that kind of player. I wanted to come back home to show everyone what I’m capable of. My goal is still to go back over there."

At the time of our talk, Brynäs has just secured play in the SHL for the 2022/2023 season without having to play any qualification games in the coming weeks (it's been mathematically established that the playout series will be see Timrå face Djurgården).

"We’ve had some ups and downs. We’ve won and we’ve lost but we’re going for the playoffs and we’ll make it. No question about it. But yeah, it’s a nice feeling to know we don’t have to be involved in the qualification battle to avoid relegation. That eases the pressure" Timashov says. 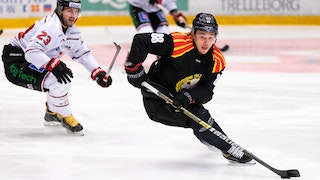 After a few rocky years, Brynäs are now within striking distance of the playoffs. And coach Mikko Manner has done what he came to do; Get Brynäs sort of stabilized. Manner often talks in interviews about the mental side of things, how the players must get the opportunity to cut away from hockey once they leave the rink.

How would you describe Mikko Manner?

"He’s personal but yet he’s not, if that makes sense. He sees the person but everything is about building the team. The team is greater than the individual. For him, everything comes down to the group of players doing the job instead of a bunch of individuals. Some teams have individuals getting noticed. But Mikko’s more about building a team and he’s done a great job in doing so. We’ve won a whole lot since my arrival and if you have a solid foundation on the team it’s easier for others to kind of follow suit. With strong leadership, the following gets easy."

On the ice, Dmytro Timashov has made quite the impact, scoring seven goals and adding ten helpers in the 28 games he has played at the time of writing. That currently puts him seventh on the team in points, despite Timashov having played at least 19 games less than all the guys in front of him.

"I felt I had to adapt a bit to the bigger ice, I did. It felt a bit weird getting the time and space. But I like that, it benefits my play. But when you come to a new team, there’s always a bit of pressure" he says.

With a deal through next season, it'll surely be interesting to see what Timashov can do during a full SHL season.

Born in Kirovograd, Ukraine, Dmytro Timashov moved to Sweden at the age of "five or six". At that point, he had no idea what hockey was. But his stepdad provided his first pair of skates on his birthday and, well:

"I’d never seen a hockey game, I didn’t know anything about it. I tried skating, and I just kept going to the rink to skate more and more. After a while, I joined a team - Sollentuna - and that was really the whole beginning." he says, explaining he also tried soccer ("I played forward" he laughs) and greco-roman wrestling. 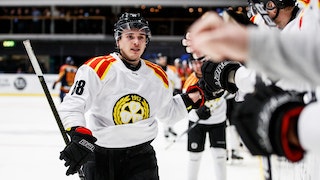 Looking through his social media, every now and then a nice scenic photo pops up.

Are you into travelling?

"What? No, haha! Those trips are just for training. I go to Aspen to do some high altitude training. And then you just post a nice picture, making it look like you’re an avid traveller" he says with a chuckle.

What do you do to cut away from hockey, then?

"I’m quite into the stockmarket. I read up a lot, it’s fun."

Are you into crypto exchanges and stuff like that as well?

"I’m in everything you can be involved in. I’ve taught myself."

Are you doing well on the markets?

It sure seems so. Both on the ice and off the ice.