After a week off for all but two teams, action resumed on Thursday after the holiday break with all 14 teams playing two games this week.

Coming into the week, HV71 had won just two of their previous five games and were looking to bounce back. They did just that with a pair of wins this, becoming just the fourth team this season to reach the fifty point mark.

They kicked off the week on Thursday, the day after Christmas, with a matchup against a struggling Leksand team that had lost three in a row. The game was fairly evenly matched as both teams exchanged chances and both rippled the mesh in the first and third periods to force the game to overtime, locked at two goals a piece. The overtime frame did not yield a winner and so a shootout was needed to break the tie. Neither team had much success in the shootout as Oscar Sundh was the lone goal scorer, ripping a wrist shot home past Janne Juvonen to give HV71 the two point victory.

The second game of the week was an important one in the standings for HV71 as they visited Örebro, a team they were just one point behind.

The visitors came out hard and fast in the first period, absolutely peppering Dominik Furch with 16 shots and allowing just 5 for Örebro. Their efforts paid off as a pair of goals rippled the mesh and gave HV71 the early 2-0 lead heading in to the first intermission. The second frame was almost a mirror opposite of the first as it was Örebro with 14 shots on target and HV71 with just 5. Örebros efforts were awarded with a goal about halfway through the frame and the game headed to the third 2-1 in favour of HV71. It didn't take long for HV71 to restore the two goal lead in the third, but Örebro would answer back. Unfortunately for the home team, the visitors were just to much to handle. A goal from Simon Önerud in the final five minutes of the frame seeled the deal and HV71 came away with the full three points, leap frogging Örebro in the standings and taking sole possession of fourth overall with 51 points. 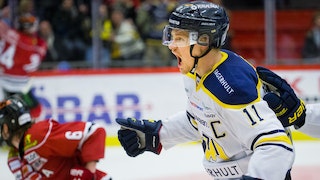 HV71 will look to continue their success this week with just one game against Frölunda.

This weeks game of the week came back on Thursday evening in Gävle as Brynäs played host to a struggling Oskarshamn. Coming in to the game, Oskarshamn had won just two of their last nine games and were looking to string together back to back wins for the first time since the start of the season that saw them go three and one in their first four games.

Oskarshamn struggled right out of the gate as Brynäs allowed just four shots all period and responded with ten of their own. A bit of a controversial goal would open the scoring for Brynäs on the man advantage as the shot from Emil Molin would find the back of the net. However, the Captain Anton Rödin made significant contact with Fredrik Pettersson-Wentzel but was ruled to be outside the crease and so the goal would stand as the only tally of the period. Despite their lack of chances in the first, Oskarshamn would respond with a a great performace in the second.

A powerplay awarded late in the first period would allow Oskarshamn to start the second on the man advantage. Just over a minute in to the frame Tyler Kelleher would walk off the half boards and rip and wicked wrist shot top corner to tie the game at one. Brynäs would answer back about ten minutes later as a fast break up the ice would be finished off by Nicklas Danielsson to reatore the lead. It was short lived, however, as Oskarshamn quickly responded, this time from Robin Söderqvist who scored a goal that was beautiful from start to finish. A fantastic long pass from Nichlas Torp sprang Söderqvist all alone and a nifty backhand/forehand move beat Samuel Ersson up high to tie the game. Oskarshamn would cap off the frame with another powerplay goal, this time from Jonas Engström, to take their first lead of the game heading in to the final frame of regulation. 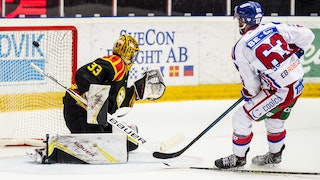 The third period was back and forth as Oskarshamn looked for a bit of insurance and Brynäs was desperate to tie it up. Brynäs caught a bit of a break late in the frame and were awarded a powerplay opportunity. With under three minutes to play and down by one, Head Coach Magnus Sundquist elected to pull Ersson and give his team the six on four opportunity. It turned out to be the right choice as a scramble ensued in front of the net and Tomi Sallinen was able to bury the game tying goal to force overtime.

Despite a couple chances by both teams, the goaltenders stood tall in the extra frame and the shootout was needed. It was the man who opened the scoring for Oskarshamn who would also provide the winner in the shotout. Tyler Kelleher made a beautiful move that fooled Ersson and was the only player to put one past in the shootout, giving his team a much needed two points and back to back wins.

With their success this week, Oskarshamn now sit tied with Leksand at 27 points, just one back of 12th place Linköping.

Luleå takes over top spot this week and now sits alone with with a five point lead over both Frölunda and Färjestad. As previously mentioned, HV71 leap frogs over Örebro for fourth spot and Rögle remains on the bubble in sixth. The only change in the bottom of the playoff standings is Djurgården passing Malmö, however both teams have 41 points, but Djurgården has a game in hand. Brynäs sits 11th overall with 34 points, just three back of Växjö. It's a tight race at the bottom of the standings and Linköping sits just one point ahead of both Leksand and Oskarshamn, however, Linköping has a game in hand.

Check out this weeks to goals