We continue to sum up the season - club by club. We now come to fourth placed Skellefteå AIK. "We are happy with the season," says Linus Lindström, 22.

Linus Lindström's comment: “We are happy with the season. We aimed to reach the top four and finish with the SM gold. I think we have improved as the season went on, both as a team and as individual players. I think things worked really well."

You had a strong end to the regular season and you said you got better the longer the season went. Was there something the team changed that made you more successful?

– We changed some small details all the time, in order for the game and the system to work better and I think it did. We got along very well at the end. We would have been a scary team in the playoffs. 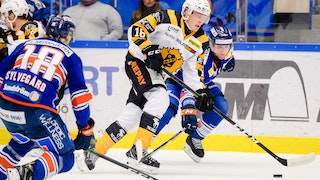 What are you most satisfied with this season, from a team standpoint?

– How we worked for each other. How everyone got started and knew how to play, aggressively and intensely. That was the key to coming fourth.

If you were to highlight any individual player. Who would it be?

– Oscar Möller. As a captain, he does very well. I would also like to mention (Andrea) Wingerli and (Jonathan) Pudas. They are good at pushing it in practice and training. That's an important part. They are good at competing against each other.

Lindström's comment: “Offense worked well. We want to play offensively, even if we focus on defense. Sometimes we played around the goal too much and were on the outside. It was something we trained a lot on and that menat got more pucks towards goal. Throughout the season, I think the offense was good. ”

Once again, it was Joakim Lindström who won the internal points league in Skellefteå. PHOTO: Bildbyrån.

Lindström's comment: “Our defensive game system is key. We want to put a lot of pressure in the neutral zone, especially on the blue line, so the opponents have to dump and we have to pick it up in our own zone. It stopped a lot of the opponents' offense, they were not allowed to get control of the puck in our zone. They had to work for their chances. We had good pressure in our own zone, blocked shots and sacrificed for the team. We also had very good goalkeepers as well.”

Lindström's comment: “I think that has also been good. Joakim (Lindström) is cruel on the powerplay. He has a great shot and can set up other players as well. (Oscar) Möller and (Jonathan) Pudas are also very good on the PP. Powerplay is an important part of the game and I think we handled it well."

Lindström's comment: “It's fun to play at home, with the audience in the back. You want to win for them and they want to help us win. It's fun to play here and it's good pressure. At home, I think we should be happy with our performace.”

Lindström's comment: “We have talked a lot about taking command on the ground and not putting ourselves in the back seat. I think we did well. We tried to think that we should play like at home and just play hard."

Lindström's comment: “We have talked about taking the chance if we get it. Opponents often have four forwards on the powerplay. Take aways are the best defense and then just push up. Either you get a shot on goal, a face off or at worst they just start with the puck deep. It is not dangerous to try if you get the chance, that's how we felt. Oscar Möller had six game winning goals, the second most in the league. Only Färjestads Gustav Rydahl had more. PHOTO: Bildbyrån.

…players with the most game winning goals: Oscar Möller, 6 GWG

…players with the most on ice average per match: Jonathan Pudas, 20:57 min/match