After undergoing hip surgery last spring, Mantas Armalis is finally back on the ice. He talks about the team, the league, his hobbies and his love of Marvel.

With 26 points through 16 games played this season, Skellefteå sits seventh overall in the league and is off to a decent start to the new campaign. Armalis has been happy with the team so far this season, but says they are perhaps lacking in experience compared to last years roster.

– We're a way younger team than we were last year, but we've still got a couple of guys that have been in the league for a number of years that give us that veterans edge. They know what the demands are to be on top of this league. But that's maybe why we're going up and down constantly this season, the fact we have a lot of youngsters, it's kind of like junior hockey, you're not to sure what's going to happen.

One of the biggest blows to Skellefteås roster last season was the loss of long time Captain Jimmie Ericsson. Ericsson went down with a lascerated ankle late in the regular season and it is still difficult to say whether he will return as a player. The absence of their leader, Armalis says, is a hole that is hard to fill.

– It's a big gap to fill, not just as a player, but as a leader and as a person. He took up a big space in the locker room and it's a big hole to fill and I think we're still adjusting to that. I think he still wants to come back as a player if his body allows him to. 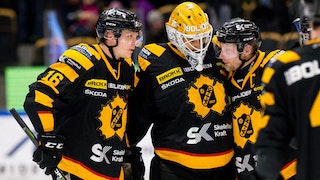 Although their former Captain has left a hole in their roster, especially when it comes to experience and leadership, Skellefteå was finally able to put Thuomas Kiiskinen in the lineup on Thursday night. With seven seasons in Liiga, two in the KHL and entering his sixth season here in the SHL, the 33 year old veteran brings with him a lot of experience and a more competitive edge to the team.

– The competition is getting tighter and tighter when it comes to spots in the lineup, and when that happens it gives our team an edge. It doesn't matter what kind of player comes in, if the competitions tough it means everyone has to step up during practice and during games if they hope to play. It was all positive things from what I've seen with Thuomas.

It's no secret that the ice here in the SHL is much larger than its North American counter part. Every North American skater I've spoken with has mentioned that adjusting your game to the bigger ice takes some time. However, as a goaltender, Armalis says the difference between the two rink sizes has a huge effect on how he plays between the pipes.

– It affects everyone, not just goalies, but maybe goalies especially. The chances that come on the smaller ice are better chances compared to what they are in the SHL. The puck comes back to you way faster in North America, where as here in the SHL if you send a rebound in to the corner you can kind of relax for a second. But in North America there's chances as soon as the puck crosses the blue line. 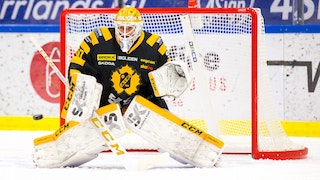 The one major difference, other than the size of the rink, that only affects goaltenders in North America is what is called the trapezoid. A section of ice behind the net that is marked by two red lines. This area of ice is the only space where a goaltender can handle the puck behind the net, should they handle it outside of the trapezoid, they will be given a delay of game penalty. There is no trapezoid here in Sweden however, something Armalis is happy about.

– I like to play the puck, so I guess I'm not the biggest fan of the trapezoids. But then again it adds a difficult element to the game, you're not as free to move as a goalie and you have to choose your time to play the puck. It took me a couple games to get used it.

Having been born in Lithuania, the Armalis family moved to Sweden while Mantas was still very young. With not much knowledge of the game when they got to the country, it was a close friend of his that sparked his love for the game and also put him on the path of being a goaltender.

– My family didn't really know what hockey was at first, but they got to know it when they moved to Sweden. So there was no pressure from them but I had this one neighbour kid that I did everything with and we played a lot of hockey and that was where I first found my love of hockey. He was also older than me, so he would always put me in net.

The one piece of equipment in the sport that a player has control over is a goaltenders mask. Although they have to meet certain standars for size and safety, the look of the helmet is almost always up to the goalie themselves. It doesn't take the sharpest eye to notice Armalis certainly has a personal touch added to his helmets. Starting the last season with a helmet featuring the Marvel Comic villain Thanos, he debuted a new helmet after the passing of comicbook legend and Marvel creator Stan Lee. The new helmet featured a number of classic Marvel characters and a picture of Stan Lee himself. Armalis says he was never a big comic book reader, but grew up with the Marvel cartoons.

– I kind of found the interest when growing up with the shows. A lot of X-men a lot of Spiderman. Then when they started the Marvel movies I really enjoy them, I found the love of those movie. Stark is one of my favorites but I've always liked Spiderman as well. My favourite of the new movies is Infinity War. 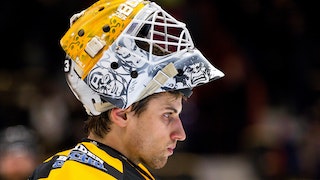 Not only is Armalis a successful professional hockey player but he has also been a male model. Something he says came about completely unexpectedly.

– It was just a coincidence, to be honest. I didn't live playing hockey so I just had a side gig working as a sales person at a clothes store. One of the brand salesman, who was a former model, kind of scouted me and told me to try modeling and the rest is history. Two months later I was in Milan for a high end model show.

When he's not at the rink, Armalis likes to spend his time hitting the links or in front of a computer playing videogames.

– I like playing golf, also playing video games. Especially right now playing World of Warcraft after they released classic WoW. I really love it at the moment.

Movie: I love the Harry Potter movies but I'd have to say Lord of the Rings

NHL Team: I have a slight interest in San Jose because they signed me, but I don't really follow any particular team