With just a single game on the week and trying to keep pace with the top six, Leksand was looking to come away with three points on the week against a team they had take to the shootout twice this season.

Leksand welcomed Linköping for an afternoon matchup on Saturday. Their previous two meetings were decided in a shootout with both teams coming away with one win. This game, however, would not require extra time.

Leksand came out firing on all cylinders in the first period as they scored a trio of goals in the opening frame, including one from Mikael Ruohomaa. Despite the lopsided scoreboard in the first, Linköping actually outshot Leksand 9-8 in the opening twenty minutes, but were unable to find the back of the net.

Despite coming into the second frame down by a trio of goals, Linköping had a decent bounce back in the period. Jonas Junland was able to pull them back within two in the first half of the frame. However Max Verronneau would score soon after to restore the three goal lead. Linköping would answer back with another pair of goals from Christoffer Ehn and Henrik Törnqvist and the game would enter the final period of play 4-3 in favour of Leksand.

Despite Linköpings bounce back in the second period, they would not be able to hold off the onslaught in the third frame. Mikael Ruohomaa would score a pair of goals to complete the hat trick. Max Veronneau and Emil Heineman would also score their second goals of the game. A single goal from Jimmy Andersson would be all Linköping could muster in the final period as they lost big for their second game in a row.

With his two goals and pair of assists in the game, Veronneau now sits atop the points board with 43 and is tied for the league lead in goals with 23. 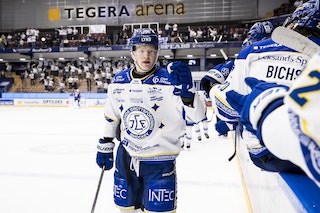 The team from Stockholm is looking ahead and planning for their future with two big signings this week. They have inked both Daniel Brodin and Marcus Krüger to four year deals which come into effect starting next season.

– Marcus and Daniel are in addition to two very competent hockey players also two very clear Djurgårds identities and strong informal leaders. I have for some time expressed that we have lost a bit of our identity and our core group in recent years. This will therefore be two very important pieces of the puzzle in the journey we are on, with building and refining Djurgården Hockey, says Djurgården's acting sports director KG Stoppel

Djurgården fans will of course be familiar with both these names. Brodin played seven seasons with Djurgården and also came up through their junior program. Most recently he has been playing with HC Fribourg-Gottéron in Switzerland.

Krüger hasn't played in Stockhom in more than a decade, but he also came up through their junior program and played three season with the big club. He then spent nine seasons in North America, eight with The Chicago Blackhawks where he won a pair of Stanley cups. He also spent one season with the Carolina Hurricanes. The last three seasons have seen him playing with the ZSC Lions, also in Switzerland.

Jacob Nilsson will be staying with Frölunda. The 28 year old came to Frölunda this season after playing with Färjestad last year. He got off to a good start with three goals and one assist in his first five games with the club before going down with a knee injury, he has not played since september. Despite his injury Frölunda have has offered him a new contract that will extend over next season.

– The season has not turned out as we and Jacob intended because of the injury. But he is a wonderful guy that we want to continue working with. We like Jacob and he has potential, he showed that, if nothing else, during the start of the season, says Frölunda's sports manager Fredrik Sjöström. 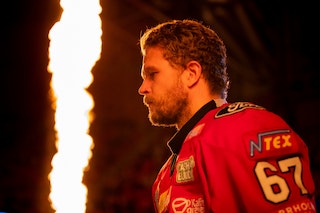 Despite having a very successful junior career with the Linköping organization, Markus Modigs never actually played with the big team. That changed this week as LHC inked him to a contract that is valid for the remainder of the season.

– It feels great. The LHC has been an important association in my career and I have many friends left in town. It feels extra fun to come to a team that consists of many former teammates from the junior season and with Klas as head coach, says Markus Modigs

Modigs has spent this season with MoDo in HockeyAllsvenskan. Previous to that he spent two seasons in the SHL with Oskarshamn. The 29 year old also has previously played with Vimmerby, Almtuna and Kallinge/Ronneby.

Rögle have bolstered their blueline this week with the addition of Valtteri Kemilänen, who is currently representing Finland in the Beijing Olympics and will join the team once the games have concluded.

– He's a player that I've followed for a couple of years. He is a mobile right-handed offensive defender who likes to be part of the offensive game and who has a good shot. He has become a top defender in Europe, says Rögle's sports director Chris Abbott.

The contract is valid untilt the end of this season.

Frölunda is bringing a new player from the KHL as they have recruited Radan Lenc from Amur Khabarovsk. Before this season in the KHL he spent his entire career in the Czech Republic and is also representing his country in the Olympics right now.

– We have looked at him before and now it worked. He has signed a contract for the rest of the season. He is a fast and intense forward that fits into our game system. He has a good attack and a sharp shot, says Frölunda's sports director Fredrik Sjöström.

Lenc will join the team after the Olympics have concluded.