We continue to look back at the regular season, club by club. Now it's time for Linköping, as forward Henrik Törnqvist gives his view of the team's season. "A tough start, but strong of us to turn it around and finish strong," says the 23-year-old.

Henrik Törnqvist's comment: "A very special season. The first half we did not play as well as we can. We got better the longer the season went on and that's what we can take away from this season. The beginning of the season was very tough with a lot of adversity , but it was strong of us to turn it around and finish strong."

Is there any certain point where you felt it turned around

– It was a while before we started winning games (from January 21 and over the next few weeks, LHC won seven out of nine games) that we started playing good hockey. Somewhere in there, I thought it turned. There were some matches we were close to winning and eventually things turned around and we started to win. It is difficult to identify any specific thing that helped us turn it around, but we continued to work hard and got better and better.

After a season in Timrå, Henrik Törnqvist returned to Linköping for this season. PHOTO: Bildbyrån

All other teams outside the top-10 changed coaches during the season. Are you surprised you didn't?

Törnqvist's comment: "We had a good idea from the beginning and have capable players. If you get a little flow in the beginning and a little success it becomes easy to build on. We ended up there and then you get the confidence to make those tight passes. We had self-confidence on powerplay and that makes it easier to succeed a man up."

Törnqvist's comment: "We had a great penalty kill. We have some really good guys in that situation. They fight and cover shots. We won alot of games in the end thanks to a good penalty kill. They should get all the cred for that. We worked hard for that, and had a good plan. "

Linköping was the only club outside the top 10 that chose to retain the head coach (Bert Robertsson) throughout the season. PHOTO: Bildbyrån

Törnqvist's comment: "There is a lot to work on. We need to score more goals, as simple as that. It felt like we were scoring more and more goals at the end of the season, and that is part of the game system. We worked a lot on the defensive game in the beginning and got adjusted to that. Then the offense came in a little different. When we worked more on the offense we scored more goals. But as I said, there is still a bit of work to be done, but I think there's alot of positives. "

Törnqvist's comment: "We worked hard on the defense in the beginning, as I said. We had a heavy start where we let in a lot of goals and it also made us work even harder on it. The defense has been really good."

Törnqvist's comment: "In Saab Arena I think we have been great. It is nice to come out and play for our fans. If we had some tough losses on away ice then the fans may have helped us win those matches that have been a bit smoother at home."

Törnqvist's comment: "Character and heart I think that number says. We have guys who love to block shots for the team. We have talked about sacrificing ourselves for the team and it is positive that we are so high up in those statistics." 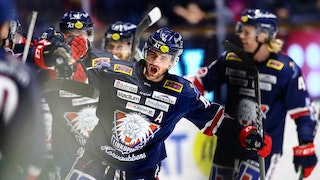 …players with the most game winning goals: Olle Lycksell, 3 GWG.

…players with the most on ice average per game: Jonas Holös, 22:45 min/match