Unfortunately, the SHL season ended earlier than planned. However, the regular season was able to finish and now its time to summarise the season - club by club. First off: IK Oskarshamn, Emil Wahlberg, 30, gives his opinion of the team's season.

Emil Wahlberg's comment: “We started out well, but got weak after a while. Then I think we played pretty well but we didn't get the results. There were many close losses, honorable losses, which made us end up where we ended up. It was tough mentally when we felt that we were close all the time, but we did not succeed all the way forward." 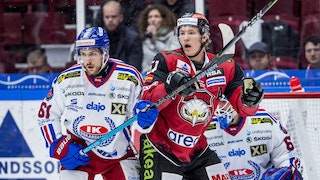 Emil Wahlberg made his first SHL season. He came to Oskarshamn from Västervik for the season. PHOTO: Bildbyrån.

You had incredible player turnover, how much did it affect the group?

– The fact that players come in didn't affect us much. But it is never good when it happens too much. We have had almost two teams and that's not good. You have to set a group dynamic and you have to find your roles. It's hard to fix it when new players come in all the time. We have nevertheless had good cohesion all the time. We have taken good care of everyone who has come in, but somehow it will still shake the group if there are a lot of new players coming in. When you're eight defensemen and here comes a ninth, there are thoughts like "is it me they are unhappy with?" and "Should I be worried now?". Same for forwards if new forwards come in.

You changed coach at the end of January from Håkan Åhlund to "Perra" Johnsson. What effect do you think it had?

– We had 14 straight losses, some of which were before Åhlund was let go. We came together as a group, I think. Had we got a win in the beginning it might have been different. But the losses rolled on and the success did not materialize. No regrets about "Perra", Jeff (Jakobs) and (Fredrik) Hallberg, but the fact is there was no major effect from the coaching change, then we had won more matches. 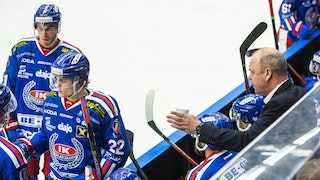 Per-Erik Johnsson took over as head coach in Oskarshamn at the end of January. PHOTO: Bildbyrån.

It was the club's first season in SHL. What lessons can you draw from it?

– I have a hard time deciding, because I've never been to a bigger club than Oskarshamn. Those who have been to larger clubs and have played in SHL before can probably easily say what needs improvement. Of course, things could have been done in other ways. You have the player bits in and out. Fewer new players in the squad would have been better. Then you can discuss whether the timing was right to let the coach (Åhlund) go between two matches or if you could have waited a day because then it was a week's break. I think the club feels that there is a lot to learn and also we players think we have a lot to learn. Like when the decision was made (to change coaches) to then stand behind the decision.

Wahlberg's comment: "Not only is this a reason why we came in 14th place, but it is one of the big reasons. We are not stisfied with 12 percent. That figure must be improved in the coming season. We would have had to get that figure up if we would have played in the all-Swedish qualifier. There is a lot that is decided on the powerplay and you have to have it up to 20 percent if you want to be happy with it. "

Wahlberg's comment: "It's not good either. It must be at least 80 percent for it to be good. These are things we need to get better at."

Wahlberg's comment: “It was a bit upside down. In some games we had good attacking games, but we didn't get the puck. I remember Skellefteå at home where we were really good, but lost by 2-4 or whatever it was. We have to get better in the offensive game. If you score just over two goals on average per match, you will not win many matches.”

Wahlberg's comment: “It has been up and down there too. Just as with the offensive game, I think the defence got better the longer the season went on, but if you score two goals per game and allow four on average, it is not difficult math. We got quite a lot of points in the beginning, but then it felt like we were spending a lot of time in our own zone. It was one of the things we improved during the season, that everyone became more involved both offensively and defensively."

Wahlberg's comment: “Of the losses at home, there were many one-goal losses and many times we were better than the opponents, but we did not get the puck. Our offensive game has been a small Achilles heel. At the same time, allowing four goals per match will be difficult to win. But there weren't many matches at home that we played." 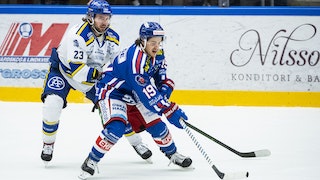 Wahlberg's comment: “There is more to be desired there. It's been too bad. If you want to finish higher than place 14 you have to take more points away than that. Too bad."

Wahlberg's comment: “Håkan (Åhlund) and Fredrik (Hallberg) started to laugh at us early on that when we entered the attacking zone we would not only look for the pass but maybe shoot at the pads and look for opportunities in front of net. The same for us defensemen. In the beginning there were many passes back to back, and if you do that in this league, the opponents often get into the shot line. We trained a lot to get the puck in as quickly as possible on goal. I think that also got better during the season.

…players with the most ice time per match: Ben Youds, 22:01 min/match.