After a first round that saw sweeps in three of the four series, the semi finals offered tighter contests. Both series went down to a fifth and deciding game to decide the two finalists that would be competing for the Le Mat Trophy this year.

The week kicked off with game 3 of the Skellefteå/Rögle series as Skellefteå was in a do or die situation after dropping the first two games of the best of five series. They came out flying in the first as they scored a pair of goals just a couple minutes apart in the first half of the frame. They also managed to hold Rögle to just 4 shots on net in the frame. Rögle would push back in the 2nd as Adam Tambellini brought them back within one, but that's as close as they would come. An additional pair of goals in the third from Skellefteå sealed the victory and Skellefteå would live to fight another day.

Neither team had much time to rest as they were back on the ice less than 24 hours later for game 4. Despite being heavily outshot in the first two frames (27/15) the play of Gustaf Lindvall between the pipes kept Skellefteå alive. The only two markers in regulation time both came early in the 2nd period as Niclas Burström for Skellefteå and Joey LeLeggia for Rögle rippled the mesh less than a minute apart. Despite Rögles heavy shot advantage in regulation time, they were unable to manage a single shot in the overtime frame. A beautiful passing play by Skellefteå would be finished off by Joakim Lindström and Skellefteå would force game 5 back in Ängelholm on Thursday night.

Despite Skellefteås success in games 3 and 4, game 5 was all Rögle as they once again heavily outshot their opponent. Despite the shot advantage, however, they managed just a single goal in the first two frames as Gustaf Lindvall once again kept Skellefteås hopes alive. A second goal early in the 3rd frame proved to be the nail in the coffin for Skellefteå as they would give up another pair of empty net goals after pulling Lindvall. Rögle would come away with the 4-0 victory, securing their first ever SHL final appearance. 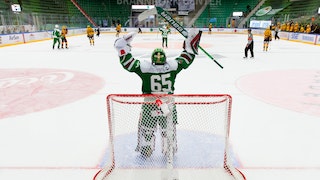 The other semi final series was just as tight as Växjö came in to Tuesday nights contest with a 2-1 lead in the series and an opportunity to finish off Örebro. The first two periods were a fantastic performance by Örebro as they outshot the Lakers and carried a 2-0 lead into the final frame. Nick Ebert managed to score his second goal of the game early in the 3rd period and it looked as if Örebro would coast to the victory. However the Lakers wouldn't go down without a fight as two quick goals from Jack Drury and Christian Folin pulled them back within one. The Lakers created a plethora of chances in the dying minutes with the net empty, but were unable to put one past Jhonas Enroth as Örbero was able to hold on and force a decisive game 5 on Thursday night.

The Lakers came out firing on all cylinders in game 5 as they outshot Örebro 15-1 in the 1st period and rippled the mesh with a pair of goals in the frame. Örebro did manage to improve in the 2nd and 3rd and were finally rewarded with a goal as Kristian Näkyväs point shot found its way through a screen and pulled Örebro back within one. With the net empty in the dying minutes of the third period, the rebound off an Örebro shot would be picked up by Brendan Gaunce, fired off the boards, down the ice and into the open net. A bit of luck and a good bounce secured the Lakers victory as they came away with the 3-1 victory, finding themselves back in the finals for the second time in four years. 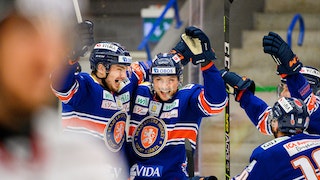 Game one of the SHL finals was played on Saturday afternoon in Växjö as the home team would not dissapoint their fans. Despite managing just a pair of shots on net in the first frame, Växjö would find the opening goal of the game after a scramble infront of the Rögle net would be jammed home by Richard Gynge for his fourth of the post season. Rögle would respond late in the 2nd period as the young Moritz Seider would get the first of his SHL post season career to tie the game and send it 1-1 into the final frame of regulation. Pontus Holmberg would play the hero for Växjö as a beautiful back handed shot short side rippled the mesh half way through the third period. That would be enough as the Lakers held on to take game 1. Game 2 gets underway tonight at 8.