This week saw Brynäs come out firing on all cylinders as they put forth an impressive performance agains two tough teams and were rewarded with a full six points. We also take a look at player movement over the past seven days and you can checkout this weeks top saves and goals from around the league.

Our team of the week this week came away with the full six points in their two games, which has propelled them to the top of the standings. Although it's still very early in the season and standings don't mean much at this point, Brynäs certainly has to be happy to find themselves sitting alone at the top. Their two games this week showed that, despite the fact they just avoided relegation last year, they are a different looking team with a lot to prove.

Neither one of their games this week was going to be an easy win as they started their week facing off against the defending champions. The first period against the Lakers on Thursday night was fairly quiet as neither team was able to ripple the mesh. The second period, however, saw the Lakers score a pair of goals in just under 90 seconds to take the 2-0 lead as Robert Rosén and Julius Nättinen were able to beat Veini Vehviläinen. That would be all the scoring we would see in the second frame, but the scoring was far from over.

Brynäs came out firing on all cylinders in the third and managed to tie the game up just over three minutes into the final frame of regulation as Anton Rödin and Tomi Sallinen found the back of the net. The home team was far from over, however, as Chay Genoway and Noel Gunler would turn the tables and give Brynäs the two goal lead. Julius Nättinen would pot his second of the game to bring the Lakers back within one, but it wasn't enough as Brynäs kept pouring it on with another pair of goals to come away with the 6-4 victory. The win marked the first three point victory for Brynäs over the Lakers since 2018 and also saw Captain Rödin score his 80th career SHL goal.

Check out the goal highlights here

Their second game of the week also came against a tough team, but Brynäs was hoping to keep the momentum going on Saturday afternoon as they hosted Skellefteå. Last season Skellefteå managed to come away with three straight victories in the regular season, only dropping their first game of the year to Brynäs. Anton Rödin also carried a scoring streak into the game, having scored in the previous two games and three out of the first four games of the season.

Despite both teams boasting talented offenses, this game was very much a goaltender duel as both Veini Vehviläinen and Gustaf Lindvall would put forth impressive performances between the pipes. The first period was a scoreless frame, however Rödin would continue his hot scoring streak as he was able to open the scoring in the second frame to give his team the 1-0 lead. The third period looked as if that one goal was going to be the only one in the game, however Jayce Hawryluk was able to score his first SHL goal to tie the game with just over three minutes remaining in the frame. That tie was short lived, however, as Rödins hot hands potted the game winner less than two minutes later. Tomi Sallinen would put the icing on the cake with an empty net goal and Brynäs would come away with the 3-1 victory. 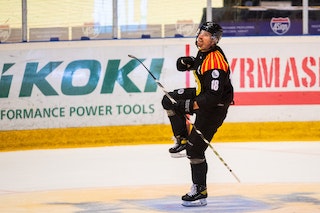 Brynäs now sit at the top of the standings with 10 points, one ahead of both the Lakers and the Redhawks. Anton Rödin is also leading the league in goals scored and sits fourth overall in points. Brynäs will look to continue their hotstreak as they face off against Oskarshamn and Rögle this week.

Peter Holland is Djurgårdens newest acquisition after signing with the team from Stockholm this past week. Holland has spent the past two seasons in the KHL playing with Automobilisk Yekaterinburg where he registered an impresive 29 goals and 50 assists in 119 games played. Previous to his stin in Russia Holland played 266 games in the NHL for Toronto, Arizona, Anaheim and the New York Rangers. He also played 252 games in the AHL with those teams affiliates.

– Considering Jacob Josefsson's injury, it feels good to be able to add an experienced and skilled center to our team. Matt Lorito has so far played center in the beginning of the season, but his regular position is, as you know, on the wing. Peter has a broad experience of games at the highest international level in the NHL and KHL and we feel confident that he will be able to acclimatize his game to the SHL relatively quickly as one of our two top centers, says Djurgården's strategic sports manager Joakim Eriksson.

If all goes well, Holland is expected to be in the lineup on October 7th against Rögle.

The young 18 year old who was drafted 6th overall by Detroit in this summers NHL entry draft, Simon Edvinsson, has been rewarded with a full time contract with Frölunda. Having passed his 100 minutes mark in the SHL, Frölunda has signed him to a two year contract valid through 2023. The 6 foot 5 (195cm) 207 pound (94kg) is widely regarded as one of the top young defensive propects coming out of Sweden.

– Simon has started the season at an incredibly high level. The rookie contract is extremely well deserved and he will take further steps in the future, says General Manager Fredrik Sjöström.

Two players announced they would be leaving Sweden this week and two have been loaned to teams in HockeyAllsvenskan.

Anton Karlson announced his departure from Sweden to join the Vienna Capitals in the Austrian League. Karlsson played for both HV71 and Linköping last season after one season in the AHL.

Matt Puempels short stint the SHL has also come to an end. The Canadian played just 15 games with the Malmö Redhawks last season and announced this week that he has signed with the Ausburger Panthers in the DEL.

The young Oskar Lawner has been loaned from Färjestad to BIK Karlskoga. Lawner has spent the past few seasons jumping between Färjestads top team and their J20 squad. In total he has registered 43 games over the past 4 seasons, including two appearences this season.

– It is very crowded in the team as we have all players healthy, and there will not be much playing time with us. It therefore feels good that we can lend Oscar to BIK Karlskoga. At that age you need to play and play a lot, otherwise it is difficult to take the next step in your development. We have the opportunity to call him back if we get long-term injuries among our forwards, but for shorter absences there are juniors who can jump in and cover up. The most important thing now is that Oscar gets to play, says Färjestad's GM Peter Jakobsson.

The final move of the week also concerns a young player as 21 year old Eric Engstrand has been loaned by Malmö to Troja-Ljunbgy. The young Forward played 45 games with the Redhawks last season but managed just one goal and four assists. The loan comes with stipulations, however, as Malmö can recall Engstarnd if they feel they need him back in their lineup.