If there are any young aspiring hockey players out there thinking they're not going to make it in hockey just because they've missed important junior tournaments or not getting selected by certain teams, take a page out of the Joel Persson hockey book. Here's his story.

At the time of the interview, the regular season is just wrapping up. Joel Persson answers his phone with a laugh. Life's pretty good. He's had another great regular season with the Växjö Lakers, scoring 39 points (8-31--39) in 50 games. The defenseman has been praised by his coach Sam Hallam, who's about to take the reins of the Swedish National Team Tre Kronor, numerous times.

Okay, full disclosure, Växjö didn't get past the quarter finals of the playoffs this season, and from time to time they've looked a bit off in their play. Joel Persson is on his second stint with the Lakers, having come back from the NHL prior to last season. More about the curious career of the center-turned-defenseman in a bit. First things first - Joel Persson has never played in second tier HockeyAllsvenskan. Växjö signed him straight from third tier HockeyEttan as a 23-year-old back in 2017.

"I always tried to think that Växjö signed me for playing the way I did and so I just wanted to play the best I could out there every game. I still saw the game the same way and all that. So I just tried to play my game," he explains, continuing:

"Of course, I got some pointers on how to play in the defensive zone for instance. But I just tried to play my best. But I was a bit lucky when I came here, let’s keep that in mind. There was a d-man who was set to play on the power play that season that got injured during pre-season and Sam Hallam just told me to go out there and play during my first game. So I came on the first powerplay unit during my first game, haha! I think I played with Janne Pesonen and Elias Pettersson - I think Elias played that game. So I got thrown out on the deep end right away and after that it just sort of continued. We went to Liberec and Davos to play in the Champions Hockey League and I had points in those games so it just kind of snowballed from there. There wasn’t a whole lot of thinking. I didn’t have the time to look back."

That season, 2017-18, the Lakers won the Swedish Championship. And when Persson came back last season, they won again, making it three for the organization - and two for Persson himself. And there's no shortage of praise for the environment created by the organization.

"We won with two different groups of players and we did it in two different ways, with the playoff matchups last year being very even all the way through, really. The organization and the leadership both on and off the ice has learned how to win together."

How would you describe Sam Hallam as a coach?

While we now know that Växjö didn't go all the way, the different season has been a learning experience for the group, Persson says. 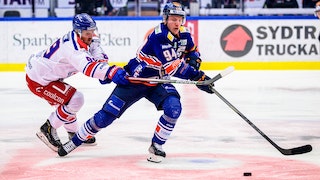 In a battle with Patrik Karlkvist of Oskarshamn. Photo Credits: Jonas Ljungdahl, Bildbyrån

"We’ve been plagued with injuries this season and that has forced other players to step up and take responsibility. We’ve learned to cope with that. The players available are the ones to play. Despite all the injuries, we managed to come in fifth in the regular season," he says.

Persson wears the A on his chest, and with that comes responsibility.

Are you the one to talk to new players? Do you let them come to you or are you kind of taking the young ones under your wings?

"I think it’s a bit of both. I don’t have any problems talking to new players. If I see the need I do talk to players. But at the same time, you can kind of feel when someone needs it and when they don’t. I’m probably one of the guys talking the most in the locker room. But I’m not the one yelling stuff. I just try to see to it that everyone is happy and feeling well. You can’t read everyone just by meeting them at the rink, but I try to work that way."

In 203 regular season games, defenseman Persson has put up 140 points, 28 of them being goals. How would the two-way defenseman describe the SHL?

"It’s not the kind of run and gun hockey you get in the AHL, for instance. Everyone plays to a structure and a system and it fits me even though I might not always keep to the system we play. But it fits me well, and I think it shows when looking at my stats and the results we’ve had," he says.

And then there's the curious case of Joel Persson himself. At 28, he's now passed the 200 game mark in the SHL, winning two championships and also having a go in North America with 13 NHL games and 34 AHL games on his resume. At 23, he was still playing third tier hockey in HockeyEttan. And to get there, we have to start from the beginning. Joel Persson comes from a family deeply invested in sports. His father played hockey, soccer and bowling and his mother played soccer and bowling and his siblings have at one stage or another been into different sports. And while Persson himself played both hockey and soccer for a long time, when push came to shove, hockey was always number one, even though he says he had a bit of a neck for soccer as well, where he played central midfield.

So you were a strong runner box to box?

"No, not that much of a runner but I could distribute the ball and create plays very well," he laughs.

At the age of 16, he left his youth team Osby to play with Kristianstad and that season, 2010-11, he played both U18 and U20 hockey with his new club, notching points both here and there. And that brings us to a bit of a reveal:

"I played forward for a long time. I played center. The thing was, when I was growing up, I played center on my own team and when I played with the older teams, I played defense. I think it was to my benefit. I got to learn both crafts, so to speak and that took me to the position of offensive defenseman and maybe I’m a mixture between center and defenseman," he says, continuing: "I think I’ve had great use of playing different positions when growing up. There isn’t that much of a difference between playing center and offensive defenseman. Or… Of course, there’s a difference in some aspects, but there are also quite a few similarities".

Having played with Kristianstad for a few years, he switched back to Division 2 - fourth tier in Sweden - and Osby for a season before he moved to their arch rival Tyringe prior to the 2014-15 season, a move that "didn't go down all that well with some people", he explains laughing.

"But I didn’t for my own personal development. And I’ll never forget the first meeting I had with coach Linus Rahm He said: 'I expect you to score at least 40 points this season.' And I thought to myself 'Does he even know I’m playing D?'

Persson did it. He had 46 points in 36 games that year and he kept going, playing another season with Tyringe before playing one more year, 2016-17, with Kristianstad, where he had 40 points in 38 games. And then Växjö called, which brings us back to "I always tried to think that Växjö signed me for playing the way I did and so I just wanted to play the best I could out there every game," from earlier. 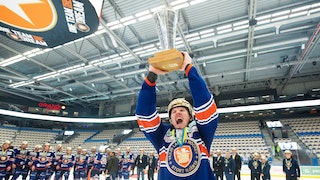 He did from the get-go and two seasons in the SHL was enogh for the Edmonton Oilers to take him across the Atlantic to North America and the NHL. But his time in the National Hockey League got cut short due to injuries and after two years, mostly spent in the AHL, he came back to Sweden. Is the NHL a closed chapter, though?

"No, I wouldn’t say that it is. If the right opportunity presents itself, I would be open to give it a new try. I learned a whole lot during my first time over there. There’s a huge difference playing here and over there. And it is a matter of adapting and I didn’t have the time to do so because I got injured twice early on during my time with the Oilers. I don’t know if I’d made it work anyways, but getting injured twice during your first year in the NHL isn’t optimal."

There are a lot of ways to find success. Sometimes, taking one step at a time is the exactly right way. And while others go straight to the top, you can always reach there if you put your head down and grind. Joel Persson did. And it worked out pretty darn good.