With the past week behind us, we take a look at player and personnel moves within the league and highlights from the weeks action. This week includes the return of a young prospect to Rögle and Malmö lock up a goaltender for the near future.

This weeks action was absolutely packed with goals and offensive production. Between Tuesday, Thursday, Saturday and Sundays action there was a total of seven games with at least seven goals or more.

Although there was no seven goal games on Tuesday evening, the nights action did feature a game where one team scored six goals. Unfortunately for Färjestad they were on the receiving end of a dominant performance from Skellefteå as they got shutout 6-0. Special mention also goes out to Linus Söderström who turned away all 28 shots he faced in the game to post his first shutout of the season.

Thursday evening saw Timrå defeat HV71 4-3 in overtime with Joey Lallegia scoring the overtime winner to give Timrå the extra point. Örebro defeated Leksand by the same score in regulation time. Skellefteå and Färjestad had an offensive battle that ended 6-4 in favour of Skellefteå. And Oskarshamn came away with a big 5-4 victory over Frölunda that included the overtime winning goal from David Quenneville with less than a minute remaining in 3 on 3 action.

Saturday was much of the same as HV71 was once again on the wrong side of a high scoring game, losing to Oskarshamn 5-4 in overtime. That game also included a six goal second period, with both teams potting three a piece in the frame. Frölunda was also, once again, on the losing side of an offensively packed game as Leksand handed them a 4-3 defeat.

The week was capped off with the highest scoring game in the past seven days as the Malmö Redhawks faced off against Brynäs. Despite the game being tied at four heading into the final 20 minutes of regulation, Malmö absolutely poured it on in the thrid period with a four goal performance for their second victory in as many games this week.

All in all there was a total of 111 goals scored over the course of this weeks 18 games. 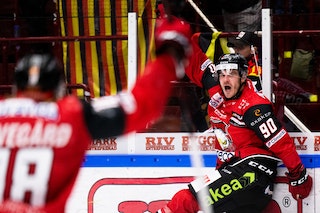 MVP of the Week

For the second week in a row our weekly MVP award goes to a Skellefteå player as Oscar Möller had an incredible week. The Skellefteå Captain posted two goals and three assists in their back to back vitories against Färjestad on Tuesday and Thursday evening.

– Definitely great fun to watch. Färjestad is a really good team that changes the game quickly. They took advantage of it a few times today. Other than that, it's nice to get an away win like this with us, said Skellefteå's captain Oscar Möller after Thursday nights victory in Karlstad

He then finished the week with a single assist against Örebro in a 3-2 shootout loss. With his six point week he know sits tied atop the points leaderboard and is also tied for the league lead in goals with four. 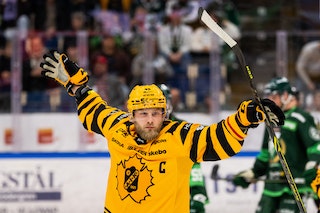 It wasn't just good news on the ice for Malmö this week as the Redhawks have come to terms on a new deal with goalkeeper Daniel Marmenlind. The 24 year old net minder came to Malmö last season where he made an appearence in 31 games, posting a 2.41 GAA and a .905 SV%. In four games played so far this year Marmenlind is 3-1 and boasting some of the best goaltender stats in the league early in the season.

– We are extremely happy to be able to extend the contract with Daniel. He has shown great patience throughout his career and purposefully took level by level in his development - via Division 1, HockeyAllsvenskan and later the SHL. Since he came to us, he has developed into an established SHL goalkeeper. Daniel is extremely serious in his training and works purposefully every day, says Malmö's sports manager Björn Liljander.

The new contract extends until the end of the 2024/25 season.

Rögle will be happy to have one of their young prospects back in the lineup for this season. Adam Edström was at training camp with The New York Rangers for the past few weeks, but the Rangers have loaned him back to Rögle for this season.

As one young player returned to his former team, another parts ways with his. It was confirmed this week that 23 year old Lukas Elvenes and HV71 have decided to go their seperate ways.

– I have had a good dialogue with Lucas about the situation. He wants a different role than the one we can currently give him and therefore we have made the decision to go our separate ways. We wish Lucas the best of luck in his future hockey career, says Kent Norberg, sports manager in HV71.

Elvenes has spent the past three seasons having decent success in the AHL with Chicago, Henderson and San Diego.