Sitting second overall in the standings, Färjestad put together back to back wins, but fell short in their most important game of the week.

The first two periods were fairly quiet with both teams rippling the mesh. Despite a heavy shot differential in the second frame that saw Färjestad outshoot Örebro 12-5, the game would head to the final frame of regulation all tied at one goal apiece.

The third period would see both offences come alive as they would go tit for tat and exchange a total of four goals, two for each team. Neither team was able to break the deadlock before the end of regulation and so overtime was needed.

Despite going deep into overtime, neither team was able to muster a shot on net and it looked like a shootout would be needed. However, Färjestad would be awarded a powerplay and just as the penalty expired, Gustav Rydahl was able to find the back of the net and secure the two point victory for Färjestad with just 16 seconds remaining in OT.

Their second game of the week on Thursday evening saw them return home to host the Frölunda Indians. It was a very important game in the standings as Frölunda sat just two points back of Färjestad coming into the contest.

The scoring started fast as Färjestad needed just over two minutes to find the back of the net as the home team took the early 1-0 lead. Despite 13 shots from Frölunda and 10 from Färjestad in the frame, neither goaltender would allow another one in the opening 20 minutes. The last two periods, however, were a different story.

Färjestad opened the second frame with a pair of goals just 33 seconds apart to jump out to the comfortable 3-0 lead. Frölunda would finally get on the board halfway through the frame and the game would head to the final 20 minutes 3-1 in favour of Färjestad.

Färjestad started the third in an almost identical fashion as the second as they scored two quick goals, this time just 43 seconds apart, to take the 5-1 lead. That proved to be to much for Frölunda to overcome as they could only muster one more before the final buzzer and fell 5-2 to Färjestad. With the win Färjestad extended their win streak to three and were hoping to make it four in their most important matchup of the week on Saturday afternoon.

Saturday afternoon would prove to be the lone blemish for Färjestads week as they traveled north to Luleå to take on the leagues top team. Coming into the game in second overall, Färjestad was seven points back of Luleå and this was their opportunity to reel them in. 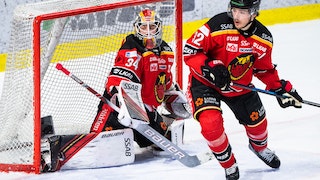 Unfortunately for Färjestad, they came up against a red hot Joel Lassinantti who was doing his best impression of a brick wall almost all game long. The second period was especially frustrating for Färjestad as they outshot Luleå 15-3 in the frame but could not ripple the mesh.

With a 2-0 lead heading into the third, Luleå was looking to close it out. Färjestad was finally able to get some life in the third frame as a powerplay goal got them back within one. Unfortunately for them, Luleå answered back a few minutes later, then sealed the deal with an empty netter to come away with the 4-1 victory. With the win, Luleå now sits ten points ahead of Färjestad and with just eight games remaining before the post season, it's going to be a tough task for any team to catch them.

Our game of the week came back on Tuesday night as two teams outside the playoffs were trying to keep pace with the top ten. Both Linköping and Brynäs have been on the outside looking in for quite some time now, but both have been making a push to close the gap with the playoff teams.

Coming into the game, the season series was 2-1 in favour of Brynäs and two of the previous three contests had required overtime to determine the winner.

Despite heavily outshooting Brynäs in the first period, Linköping wasn't able to capitalize on their numerous chances. Lucky for them Brynäs was struggling as well and the first period would end as a scoreless tie.

The second period was much of the same as neither team was able to get much going from their offence. The deadlock would finally be broken just before the halfway mark of the period. An interference call would send Linköping to the box and award Brynäs a powerplay. On the man advantage a beautiful tick tack toe passing play was finished off by Gregg Scott to give Brynäs the 1-0 lead. Neither team was able to muster much more in the frame and Brynäs would carry their narrow lead into the final frame of regulation. 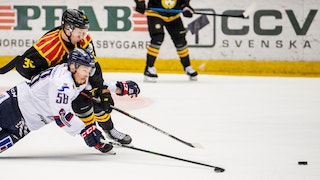 Both teams would exchange great chances in the third period as Linköping had a number of quality scoring opportunities early in the frame, but were not able to ripple the mesh. Brynäs had some great opportunities of their own, including a post shot.

With time ticking down in the final frame it looked as if the one goal would be enough for Brynäs to hold on for the win. However, with exactly four minutes remaining in the frame Jonas Holös would finally get Linköping on the board and tie the game at one. Unfortunately for Linköping the hope was short lived as Marcus Björk fired one home with less than 90 seconds to play to regain the lead. With just 31 seconds remaining and the net empty for Linköping, Sam Lofquists shot off the face off found its way home to tie the game at 2 and force the third overtime contest between these two teams this season.

Playing hero with the late game tying goal was not enough for Lofquist as he would also play overtime hero. Moving into the offensive zone, Broc Little sent a beautiful cross ice feed right to the stick of Lofquist who tapped it home at the side of the net to complete the come from behind victory for Linköping and grab a very important extra point for them.

Luleå sits atop the standings with a comfortable 10 point lead over 2nd place Färjestad. Rögle continues to sit 3rd overall and Skellefteå jumps from 6th into 4th this week with their continued success. Frölunda sits 5th and HV71 jumps back into the top 6, knocking Djurgården down to 7th. Örebro now find themselves in 8th and Malmö and Växjö round out the top 10. Not far behind the Laker is Brynäs as they now sit just three points out of a playoff spot in 11th and Linköping sits in 12th. With the end of the regular season looming, both Oskarshamn and Leksand look likely to finish in the bottom two and if that's the case, they will have to compete in the relegation tournament.