Team Of The Week

Coming in to the week, Luleå sat seventh overall with 15 points. Although they remain in seventh after this weeks action, they managed to gain ground against the leaders with two victories this week.

Their first test of the week came on Thursday night in Coop Norbotten Arena as they faced off against Leksand for the first time this season. Alhough they struggled to get shots on target in the first frame, they were able to ripple the mesh first as Jonas Berglund found the back of the net short handed to put them up by one. However, Leksand would have an answr about five minutes later and the game headed to the second all tied up.

The second proved to be a much more successful frame for the home team, as they managed to double their shot total from the first with 12 shots on target in the frame, two of which found the back of the net. Leksand managed one of their own in the second and Luleå carried the 3-2 lead in to the last period.

the third was a dominant performance by Luleå on the shot clock, outshooting Leksand 15-5 in the frame. Despite the lopsided shot opportunities, Leksand managed to tie the game with less than nine minutes to play. However, Petter Emanuelsson restored the lead late in the frame and Luleå came away with the 4-3 victory. Luleås more difficult test, however, was yet to come. 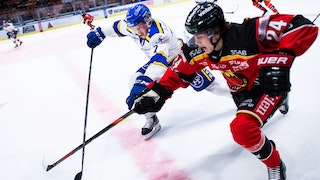 Luleå was on the road Saturday afternoon to take on the red hot team from Kärlstad, Färjestad. Coming in to the contest, Färjestad had strung together five straight wins and scored a whopping 33 goals in those five wins. Not just that, but the last time Färjestad had failed to score four or more goals in a game was all the way back on Septemebr 28th, so Luleå had their hands full.

The first period was fairly evenly matched with both teams exchanging chances and both goaltenders tunrning aside all shots they faced. The second period, on the other hand, would not be so kind to the goaltenders.

All five goals of the game came in the second frame as Luleå opened the scoring less than three minutes in. Nils Lundqkvist was able to break the deadlock on the man advantage to put his team up by one. The goals started coming fast and furious as the period approached the halfway mark. Carl Jakobsson tied things up, not to be outdone, Luleå responded about two minutes later. Daniel Viksten rippled the mesh at the 16:14 mark to tie it at two, but just 17 second later Austin Farley regained the lead. Luleå would carry the 3-2 lead in to the third, and hold on for the hard fought victory.

Our game of the week on the English language World Feed comes from Thursday night as Djurgården played host to Skellefteå in a contest that had big implications in the top six. Coming in to the game Skellefteå had been on a role with four wins in their previous five games and were looking to continue that success.

It was Djurgården who would strike first in the opening frame. A quick move by Patrik Berglund off the end boards took Gustaf Lindvall by surprise and Berglund was able to score on the wrap around opportunity to give Djurgården the early lead. The lead, however, would not last long. just 47 seconds after Djurgården opened the scoring Skellefteå answered back as Jonathan Pudas unleashed a one timer from the top of the cirlce and rippled the mesh to tie the game at one. Both teams would continue to exchange chances, but the first would finish without any more scoring. 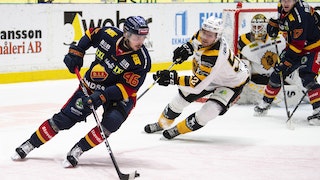 Despite the lack of scoring in the second frame, it was not for a lack of opportunities. Both teams absolutely peppered the opposing goaltender with a plethora of shots. Skellefteå registered 16 shots on target and Djurgården 12. Despite the large number of shots, both goaltenders had solid performances in the second frame and managed to keep the 1-1 tie intact heading in to the final frame of regulation.

Unlike the second, the third was fairly quiet with shot opportunities. It was Skellefteå, though, that would break the dealock with a bit of a controversial goal. Jonathan Pudas would lose his helmet behind his own net and was forced to the bench. Stepping in to the defenders gate just as Jacob Andersson exited the forwards gate looked close to too many men. However, it was a clean change and Andersson was sprung on the breakaway and managed to score while being taken to the ice. Skellefteå would add another breakaway goal from Andreas Wingerli to give them the 3-1 victory and grab a very important three points.

There is very little change in the standings this week as the top four all remain the same. The only change in the top six is Örebro dropping in to sixth and Djurgården taking over fifth. Luleå continues to threaten the top six as they remain in seventh, just one point behind Örebro, Djurgården and Färjestad. Malmö has moved up in to ninth, knocking Oskarshamn in to tenth. Leksand remains in eleventh and Linköping has fallen back in to last place in the standings.