With three wins, Rögle are on a mission to overtake Frölunda, a certain Växjö signing has really popped off and five goalies posted shutouts. Here's what went down in the SHL last week.

Rögle finished the week heading into last week by beating Växjö 4-2, which we covered last Monday. That did set the tone for their week last week. On Tuesday, they traveled all the way to Luleå and won 5-0 where Daniel Zaar opened the scoring in the first and Rögle then scored three goals in about ten minutes in the very middle of the game. Rögle followed that up by beating Skellefteå (5-2 Thursday) and Oskarshamn (2-1) Saturday, at home.

And with Frölunda still slumping, they won 3-2 against HV71 and lost 3-2 to Malmö last week, Rögle are now top of the league, with 47 points. That's three more than Frölunda, despite having played three games less than the Gothenburg team.

Örebro also won three games but didn't complete a perfect week due to a 5-2 loss to Djurgården, where former Örebro forward Tom Wandell scored what came to be the game winning goal when he made it 3-1 late in the second period. However, Örebro bounced back and snatched two more wins after that. And they did keep a streak alive: With their 5-2 win against Färjestad yesterday, they are now on a eight game win streak at home. Worth mentioning from that game is that Färjestad forward Per Åslund climbed to fifth place in points of all time in the SHL for the club. And with his two points in the game he reached 325 points.

Färjestad did lose Sunday but came out "on top" last week with two wins and one loss. As did Växjö where recent signing Andrew Calof scored seven points, three goals and four assists, in the three games they played. No other player had more assists or points in the league last week. Jesse Virtanen also had four assists. Joakim Nygård and Emil Pettersson had four goals each. 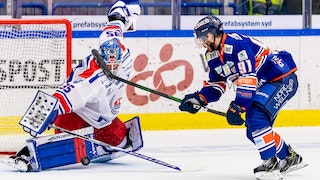 Getting back to the teams, one more team had two wins last week: The Malmö Redhawks. After a poor start to their season, perhaps things are coming around for Malmö. They won the very important game against Oskarshamn (4-0) Thursday and followed that up by beating Frölunda in Gothenburg 3-2 Saturday. That's the third time this season Malmö put togheter two wins in a row. Unfortunately, after each of the previous two streaks, a losing streak of at least five games has followed.

After being a bit sparse in the beginning of the season, goalie shutouts are now coming back with a vengance. Five goalies posted a shutout this past week, with four of them doing so on the same day; On Tuesday Jonas Arntzen (Örebro) stopped all 28 shots against Leksand (1-0), Gustaf Lindvall (Skellefteå) saved 18 shots against Malmö (3-0), Christoffer Rifalk (Rögle) stopped 22 shots against Luleå (5-0) and Niklas Lundström (Linköping) turned aside 21 shots against HV71 for his first "real" shutout in the SHL. He has one in a shootout win for AIK against Linköping on February 2nd 2013, but in that game he came on for the shootout as a substitute. The fifth goalie to post a shutout was Oscar Alsenfelt, who did so in that very important 4-0 win for Malmö on Thursday.

HV71 went through their week losing three out of a possible three games and they now have six losses in their past eight games. Oskarshamn are far worse off. They also lost their three games, but are now on a nine game losing streak. Eight of these losses are in regulation.

With that we turn to this upcoming week, where Oskarshamn travel to Linköping Tuesday in what is a new important away game. After that, they play Luleå twice to round out their week. We have eleven games on stock this week and some of the highlights to look forward to are the classic matchup between Brynäs and Leksand and Djurgården´s game against Frölunda Tuesday and the derby between Rögle and Malmö Thursday.