Rögle had a big week this week, claiming 8 out of a possible 9 points in their three games.

They started off the week on Tuesday against an Oskarshamn team that was looking for their third win in a row and who sat just two points back of Rögle in the standings. The game would turn out to be a very tight contest with both teams registering plenty of chances. The first goal of the game came from Rögle as William Wallinder was able to ripple the mesh with less than five minutes remaining in the first period.

Despite the number of chances and shots on net, there would be just one more goal in regulation time as Jonas Engström was able to tie the game at one goal a piece in the third frame, which would force the game into overtime. Unfortunately for Oskarshamn, they were unable to complete the comeback in front of the home crowd, as Ludvig Larsson would score the OT winner just two minutes into the extra frame. With the win, Rögle avoided being leap frogged by Oskarshamn in the standings.

Thursday nights matchup was arguably the biggest of the week for Rögle as they faced off against Skellefteå, who they had lost to in overtime just a week earlier. Coming into the game, the two teams were seperated by just a single point, so Rögle was looking to push past them in the standings.

The game was a dominant performance from Rögle through the first two periods. Adam Tambellini was able to open the scoring with just two seconds remaining in the opening frame. The final five minutes of the first also saw Rögle outshoot Skellefteå 7-0. The second would see Rögle ripple the mesh three times as Lucas Ekeståhl-Jonsson, Linus Sjödin and Leon Bristedt would all find the back fo the net to make it a 4-0 game heading into the third period. Despite the lopsided score, Skellefteå was not without their own chances in the first 40 minutes. Unfortunately for them they came up against a Christoffer Rifalk who was playing at the top of his game and turned away all 15 shots he faced in the first two periods.

The final frame saw a flurry of shots from both teams as Skellefteå put 12 on target and Rögle 13. Skellefteå did manage to put a pair of pucks past Rifalk in the third to bring them back within striking distance. Rickard Hugg and Stefan Loibl rippled the mesh before the halfway mark of the frame, but that's as close as Skellefteå would get as Leon Bristedt would score his second of the game to put Rögle up 5-2, which would be the final score.

With the win Rögle passed Skellefteå in the standings and also claimed their fourth straight win at home this season, with no team having defeated them in Ängelholm. This defeat was also a big one for Skellefteå as it not only caused them to fall from 2nd to 4th in the standings but it was also the first time that they have given up more than three goals this season. The lone bright spot for Skellefteå was the fact the Jayce Hawryluks one assist extended his point streak to to six games. 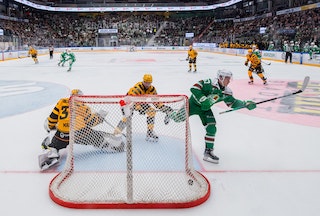 The third and final game of the week for Rögle was another home game, this time against Djurgården, as they were looking to keep their home ice undefeated streak intact. Coming into the game Djurgården was one of the weakest teams in the league and had lost four of their last five games and five of their last six away games.

The third period was a bit more evenly matched as each team managed eight shots on target. Unfortunately for Djurgården, despite their good performance against one of the top teams in the league, Rögle was able to break the tie just over five minutes into the final frame as Samuel Johannesson was able to find the back of the net. The goal would be the only marker of the period and would eventually be the game winner.

With the win Rögle completed the week with all three wins, 8 out of a possible 9 points and second overall in the standings, just two points back of Frölunda.

Malmö continues to bolster their roster this week as the Redhawks have signed Magnus Pääjärvi to a one season contract. The 30 year old was previously part fo the Malmö organization as a junior player. He also spent 9 seasons in the NHL, and most recently played in the KHL with Dynamo Moscow.

– Magnus is a player who contributes no matter what league he plays in. He has enormous speed in his game, has a high work capacity and will be a great asset for us. He is a player that I have followed since he was a little boy here at home in Malmö and it is fun that he now chooses to come home, says Malmö's sports manager Patrik Sylvegård.

This news does not concern a player but is one of the biggest stories of the week. Head Coach of Djurgården, Barry Smith, has stepped down after a very tough start to the season. This decision came as a mutual agreement between Smith and team management.

– By stepping down as coach, I hope that a positive change takes place and that the players in the team now come together and take greater responsibility in their performances, Smith says.

Nichlas Falk and Mikeal Aaro have taken over coaching responsibilities. 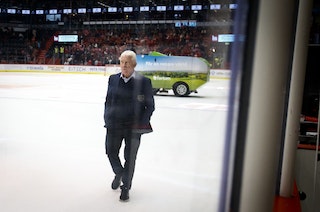 Another off ice announcement this week is the extension of both head coach Björn Hellkvist and General Manager Thomas Johansson for Leksand. Hellqvist is in his second season as head coach of Leksand and earned the head coach of the year award last season after taking Leksand to a third place finish in the regular season.

– We have started something within Leksands IF that I really want to be a part of and complete. To be able to make this journey in an association like Leksands IF, together with Thomas, is a very honorable assignment and also a great challenge, he says.

Getting back to player news, Luleå has added a big piece to their back end as they have signed 37 year old Sami Lepistö. Lepistö has spent the past 9 seasons in the KHL, most recently playing with Jokerit in Finland. He also played five seasons in the NHL.

– It feels very good that we can present Sami Lepistö as the next part in our team building. In Sami we get a very experienced and stable two-way back who will be able to help us in all situations of the game. A qualified player who will be useful to us on the power play and penalty kill, says Luleå's GM Stefan Nilsson.

Daniel Mannberg and Brynäs have mutually agreed to part ways.

– We have a great respect and gratitude for everything he has done during his long time at the club. He has made a big impression here, but right now this is what is best for both parties, says Brynäs sports manager Johan Alcén.

Mannberg has been part of the Brynäs organization since 2015 and played a total of 326 games with the team. Mannberg will be staying in Sweden as he has decided to join MoDo in HockeyAllsvenskan.

Erland Lesund has been rewarded with a contract extension with Rögle. The 26 year old Norwegian, who was given an A this season, has inked a deal that will see him remain with Rögle until 2025.

– We have had him here for two and a half years and he has developed into a very good SHL back. He has taken great strides in his game and shown that he is a big part of our team and a leader in our locker room. We are proud that he wants to be here for another three years after this season, says Rögle's sports director Chris Abbott.

Djurgården has released Canadian Matt Lorito. The 31 year old was in his first SHL season but has produced just two goals and four assists in 14 games played.

– When Matt Lorito was recruited, it was as a replacement for Manuel Ågren. He is a skilled player who has been used in various positions in our team building. But where we are now with our game, we need to become stronger in our puck possession in the attack zone, as well as more aggressive in our press game and melee game, says Djurgården's strategic sports manager Joakim Eriksson. 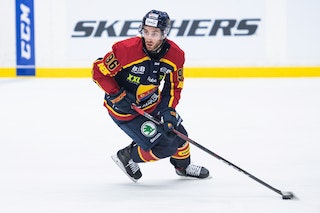 Djurgården has also acquired Stefan Warg this week in an effort to strengthen their defence. Warg announced that he was leaving Örebro and just a few hours later, signed with Djurgården.

– We are happy to be able to add Stefan to our back crew. In him, we get a player with good leadership qualities and defensive playing strength, as well as a player who is fully up and running with his season, says Djurgården's strategic sports manager Joakim Eriksson.