In his second season in the SHL, Joe Whitney has adapted quickly to the game, the culture and the country. He is optimistic that the team will be able to turn around their early struggles and have success this season.

It's no secret that Linköping has not gotten off to a start they would have hoped for. With new bench boss Bert Robertsson at the helm and a slew of new players, the team has no quite found its step this season. With just nine points in their first 12 games and tied for the leagues worst goal differential, last seasons woes seems to have followed them in to the new campaing. Despite the early season struggles, Whitney remains positive and is optimistic about the team.

– I think obviously we haven't gotten some of the results we wanted in the first games. But I think some of those games we've played well enough to win, just been on the losing end of a couple bounces. It was nice to get a win in Leksand, thought the team played really well. So we're looking to build on it as we keep going.

One of the big obstacles for the team last year was staying healthy. They suffered a number of injuries to key players down the stretch and those issues have popped up once again. Mattias Bäckman was injured in the first game of the season and is expected to be out long term, Broc Little has missed four games and returned for the win against Leksand and Adam Ginning has missed three games. Not to mention the fact that Both Almen Bibic and Anton Björkman were unable to start the season and are unlikely to play this year. Hockey, Whitney says, is obviously a rough game and that's something you have to adapt to.

One of the biggest changes to the club this season was the addition of Bert Robertsson behind the bench. Coming down from Skellefteå, where he had great success, many fans were excited about the prospect of the new bench boss. Whitney says he has brought his own style with him and has changed the culture of the team here in Linköping.

– Its been a lot different with the new coach and new GM, its been a different feel ever since training camp. But Berts done a great job of implementing his system and kind of changing the culture a bit, letting us know what he expects and what we should expect from him. Obviously it's a process that takes some time, but we're just going to get better each and every day and each and every game throughout the season. So hopefully it'll all come together. He demands a lot of us, Berts won and he knows what it takes. So it's nice to have that work ethic and that culture. 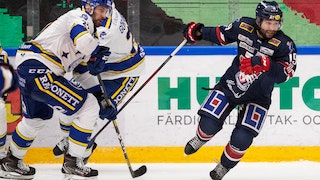 After a number of interviews with North American skaters, the consensus seems to be that this league is not an easy one to come in to and have immediate success. With the difference in play style, the bigger rink and a number of other factors, the SHL is a tough league to adapt to as a North American. However, in his first season last year here in the SHL, Whitney put up 14 goals and 15 assists for a total of 29 points, third in scoring on Linköping behind only Broc Little and Derek Roy. Despite his success last season, he says he's still learning and adapting to the Swedish game.

– I didn't really know what to expect my first season. It's a very hard league, a tough league to score goals in and to produce points in. I think for any player it's hard, but especially for North Americans it's a lot of skating and it's a bit different than the North American style, it takes some time to get used to. I'm still working at it, learning new ways to create more offence or create more time and space for my team mates. From what I've heard from other guys, it's one of the tougher leagues in Europe and even in the world.

– When I first got here, I found out it's a completely different game. On the smaller rink, things happen a little quicker, you can't hold on to the puck for as long as you can here. Back there it's more of an attack right away style, you're closer to the net in the offensive zone, you can score from pretty much anywhere in the offensive zone. Here you want to hold on to the puck and have possesion time, create O-zone time. The big ice is also a lot more skating obviously. It's definitely a bit different tactical systems in this league.

Before last season, Whitney had spent his entire amateur and professional career over in North American. Attending Boston College for four years, wearing the C in his senior season, playing 7 seasons in the American Hockey League and making a brief appearence in the NHL for the New Jersey Devils. However, Whitney was looking for a new challenge in his career and set his sights on the SHL.

– I had heard all the great things about, not only the SHL, but also Sweden as a country. I've had friends who have played in this league and they've spoke very highly of it and it was just something I've always wanted to do. Come to this league and challenge myself, I knew how good a league it is and how challenging it is, so that was something else I was looking forward to. Not only is the hockey challenging and fun, but my family and I love it here, we love the lifestyle and the Swedish people. I have nothing but good things to say about this league and country and I'm hoping I can stick around for a little while. 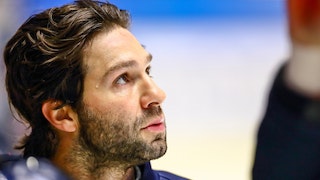 As a professional hockey player and a dad with two young kids, it's a busy life for Whitney.

– I don't think I have any time to myself (laughs) with the two kids and hockey. You go to the rink and play the game, hangout with the guys. Then you come home and get to play dad. It's pretty busy, but my wife does a great job with the kids so I do get my naps and rest, but it's a pretty simple life for me.

Despite the busy lifestyle, things do slow down in the off season. Just like most players, Whitney and his family returned home this summer for some well deserved time off.

– Spent the summer back home just outside of Boston, training and skating there. I have a good group of guys I work out with there. We had a good summer, but we were pretty excited to come back and were looking forward to the season this year.

Favourite TV Show: We watch a lot of TLC and Fox here in Sweden so Modern Family, Cake Boss and Say Yes to the Dress is on a lot at home

Dream Car: One that works and won't break down on me