With 43 SHL games under his belt, he is by no means a seasoned SHL player. But when you add his name to the conversation, it's hard not to shine the spotlight at Frölunda´s Lucas Raymond, projected to go top-ten, if not top-five, in the upcoming NHL Draft. But that's then, here's now.

Over the past decade or so, Frölunda has been one of the powerhouses of the SHL, expected to compete for the top spot in the regular season. Last season, however, they had a rough time stringing together decent results. Especially after clinching their fourth Champions Hockey League title, Frölunda seemed to have trouble in getting their act together on the ice. Now, with the 2019/2020 season in the rearview mirror, they are to mount a new title challenge:

"We had our ups and downs." Lucas Raymond says, "We played really well in stints but by the end of regular season we hit a bit of a rough patch. I think we all learned a lot from last season."

"Now, we have almost an entirely new team. Everyone is eager to get going and hungry for success."

With almost a completely new D-core and some player movement up front, there are pieces to be put together to make the puzzle work. But most of the experienced core – players like Joel Lundqvist, Simon Hjalmarsson, Viktor Ekbom, Max Friberg and the returning Jan Mursak – is there.

"We have high expectations on ourselves and we've come together really well outside the rink. But yeah, we expect ourselves to be battling in the top of the league, for sure." Raymond says. "It doesn't matter if we'd won the championship or finished last. Now, there's a new season and it's easy to re-focus."

For Lucas Raymond, most of his time in the SHL has been spent adapting. This past season, four points differed between second placed Färjestad and sixth placed Djurgården with another three points to seventh placed Frölunda. With a three point system, that shows that margins are small throughout the league. And when he talks about the SHL, Raymond is very keen on praising the structure of the teams and the effort needed to make plays and creating chances. With the influx of returning star players like Jesse Virtanen, Markus Ljungh, Jhonas Enroth, Anton Wedin and Linus Klasen that is unlikely to change. In fact, it will probably be the opposite:

"It is a defensive style league. Every team is very good in their own zone. It's hard to create chances. The structure of each individual team is solid, but having said that, there's a lot of speed out there."

For Raymond, having played nine SHL games in 2018-19 and 33 this past season, much of his play has been to adap.

"Obviously, there's a huge difference in playing against men compared to junior hockey. And the structure is the biggest difference."

Lucas Raymond began playing hockey at the age of 3, thanks to his three year older brother who wanted to play. The young boy tagged along. And despite a short stint of wanting to be a goalie, he's been a forward from the start: 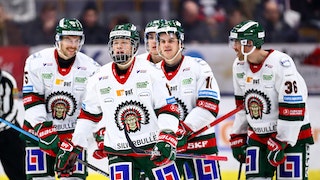 "I realized it was more fun to try to score goale than to try to stop the pucks from going in" he laughs.

Playing on a powerhouse like Frölunda as a rookie can result in limited ice time. In his 33 games last season, Raymond averaged 9:48 minutes of ice time per game. Only one forward with more than 10 games played, averaged less. But Raymond sure made the most of his time out there, scoring four goals and adding six helpers to his name. With a global pandemic limiting most of the summer activities, Raymond spent most of his time practicing.

"I've had a great summer, mostly focusing on practice. There hasn't been much else to do!" he laughs.

Despite him time and time again saying everything in his game needs improvement, we dive deeper into details and he reveals some of his focal points during the offseason:

"I've been trying to improve my shooting. And I've spent time working on my skating. I've been focusing to try to keep my speed coming out of a sharp turn. I think it has worked pretty well." he says with a laugh.

It sure has. In the six pre-season games, all against SHL opposition, Frölunda played, Raymond scored four goals and two assist. On Saturday, in the first game of the regular sason, he scored a laser beam on the powerplay when Frölunda dismantled HV71 3-0.

Raymond says he watches a lot of NHL games and although he's trying to create his own style of play byt putitng together pieces of the game that fits him, he makes no secret that he takes bits and pieces from the best players in the world:

"I like watching Mitch Marner, Nikita Kucherov and Connor McDavid." he says.

While trying to carve his own path, he takes input from some of the more experienced players on the Frölunda roster.

"There's a high ceiling. Everyone is trying to help out. The older guys helps us younger guys to find our way out there. I learn a lot from guys like Joel, Hjalmarsson and Mursak to name a few. We talk a lot and that goes for the whole team. I think that's what makes our players so good. We're very open."

NHL Team: I have no favorite team, I have players I follow.