With the end of the regular season fast approaching and the standings at the bottom of the table becoming increasingly tighter, this was an important week for the Malmö Redhawks as they try and stay a step ahead and out of the relegation series.

Thursday nights matchup was, arguably, the biggest game of the week for the Redhawks and potentially one of the biggest games of the season, considering their opponent. They visited Linköping, a team the were chasing in the standings. Coming into the contest the Redhawks sat six points back of their opponents, so an extremely important three points were on the line for both teams.

The first period was a perfect opening twenty minutes for the Redhawks. Despite the fact they managed just eight shots on target, they took advantage of their limited opportunities. Ponthus Westerholm would open the scoring on the powerplay to give the Redhawks the advantage. The rest of the period was fairly quiet, until the final two and a half minutes. Joakim Ryan scored, also on the powerplay, and then Emil Sylvegård would ripple the mesh with just two seconds remaining in the frame. The Redhawks would carry the 3-0 lead into the second period of play.

The second period would be much of the same from the Redhawks as they, again, managed a limited number of shots in the period, but capitalized on their chances. Emil Sylvegård would score his second of the game and Carl-Johan Lerby would extend the lead to five just 89 seconds later. Despite outshooting Malmö in the frame, all of Linköpings shots were turned aside by Daniel Marmenlind and the game would head to the final frame 5-0 in favour of Malmö.

The third period continued the trend of a quick pair of goals from the Redhawks as they would once again score two in quick succession. Joakim Ryan would pot his second of the game and Lance Bouma would drive one home just 41 seconds later. Marmenlind would, again, turn aside all shots faced in the frame and the Redhawks would come away with a huge 7-0 shutout vistory to secure the three points, pulling them within three of Linköping in the standings.

Saturdays matchup was a tough one for the Redhawks as the odds were stacked against them. They were coming up against a Frölunda team that they had managed just two points against in their three matchups this season. Their only victory coming in overtime back on October 23rd. They were also visiting Scandinavium, where Frölunda had not lost a game in seven straight.

It was Frölunda that struck first in the first as Jan Mursak would find the back of the net after a scramble out front. Undaunted, however, Malmö would once again score a quick pair of goals to pull ahead in the first period. Carl Söderberg would find the back of the net to tie the game and just nine seconds later Christoffer Forsberg would give them the lead heading into the second period of play.

The second frame would start with another goal from the Redhawks as Ponthus Westerholm would extend their lead to two just over two minutes into the frame. That is all the scoring we would get in that period, as neither team mustered many chances after that and the Redhawks would carry the two goal lead into the final frame of regulation.

The third period would see Frölunda shutdown the Malmö offence, allowing them just three shots on target all period long. Frölunda would muster nine of their own but, unfortunately for them, they would be unable to find the back of the net as the Redhawks would secure another important three points in the standings and snap Frölundas seven game home winnning streak. 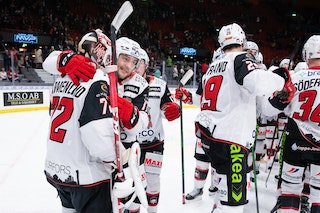 Ludvig Rensfeldt has been inked to an extension by Djurgården. This was Rensfeldts first season with Djurgården after coming over from Örebro at the start of the season.

– Ludvig is an important core player to bring into the future. He has had to carry an enormously heavy load throughout this whole season, not least considering the injury problems we had in the center position. We think he has shouldered it in an incredibly strong way and we are of course very happy about the extension, says Djurgården's acting sports director KG Stoppel.

Rensfeldt has scored 13 goals and added 17 assists this season, reaching the 30 point mark for just the second time in his SHL career. The new deal will see him remain with Djurgården through the 2023/24 season.

Another Djurgården player has signed an extension as Djurgården was able to secure Tim Söderlund for an additional two seasons. The 24 year old started this season with the Bakersfield Condors in the AHL and had appearences in the ECHL as well before returning to Sweden.

– In recent years, Tim has had difficulty gaining continuity in his playing with many different club changes. That was one of the reasons why he came home to Sweden and to the club in his heart. He is still young and has an exciting future ahead of him, says Djurgården's acting sports director KG Stoppel to the club's website.

He has appeared in 18 games with Djurgården and registered 12 points in that time (6G 6A). 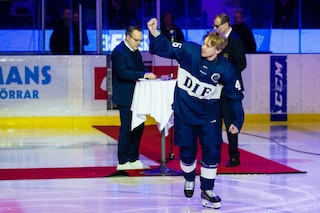 Our final piece of off ice news this week concerns the Malmö Redhawks who have announced the hiring of a new general manger. Björn Liljander joins the club after spending the last five seasons as the assistant general manager of Frölunda.

– We have followed Björn for a long time and also had an interest in bringing him here in previous years without us succeeding. He works extremely hard, something that has made him very successful in his recruitment of players, not least young ones, during his time in Frölunda. Now he feels that he wants to take this step and I am extremely happy that we're bringing him in as an important part of Malmö Redhawks future, says Patrik Sylvegård to the club's website.

Liljander will be replacing Patrik Sylvegård as the GM, but Sylvegård will remain the CEO of the team. The new agreement is a five year deal for Liljander.