An unusual career path has taken Riley Sheen to Sweden and Rögle BK where he prepares for his first glimpses of SHL hockey. In SHL Spotlight the journeyman himself shares his thoughts on the upcoming season and the winding road leading up to it.

All roads may lead to Rome, you just don’t expect to pass Beijing and Bietigheim on the way. However, that’s exactly the path that has taken edmontonian Riley Sheen to Rögle BK and the SHL. But then again there’s nothing ordinary about Riley Sheens career path. Actually, at one point he seriously considered taking a whole different road.

”Yeah, I was kind of stuck in my life and felt like I sat in the back seat of my hockey carreer. I took up school and studied for a year when I realized I wanted to get back into playing hockey, committing myself physically and really trying to pursue my goal to become a professional hockey player.”

Riley Sheen hardly regrets that decision as he is finding himself right at home in the small Swedish coast town of Ängelholm, preparing for his first season in the SHL.

”It’s great, Ängelholm is a beautiful place”, he empasizes. ”There’s no traffic, I have a 5–10 minute drive to the rink and after practice we can go down to the beach and have lunch if it’s a sunny day. It’s an easy going life style and I really enjoy it.”

Following in his cousins footsteps

It’s kind of fitting that Riley Sheen has ended up in Rögle, as his cousin Matt Fraser played for the club back in 2016/17.

”I picked his brain a bit before signing, but I also talked to Adam Tambellini who is a great friend of mine and who has played in Rögle since 2020. But I actually didn’t really need a second opinion after talking to Chris (GM) and Cam (coach) Abbott, they were so good at pitching the club and their vision to me. I appreciated those talks a lot.” 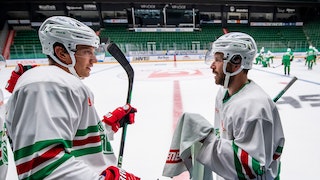 Buddies. Adam Tambellini (left) and Riley Sheen grew up playing a lot against eachother back in Alberta. Now, for the first time, the will be on the same team. Foto: Niclas Jönsson / Bildbyrån

To have two players from one family representing the same franchise is pretty uncommon, even more so considering the family comes from Canada and the franchise being Swedish. It all started in Edmonton, Alberta, where Riley Sheen grew up with his one year older brother Cole, his father Warren and his mother Linda. The Sheens was a true hockey family, with Rileys grandfather Rudy, who unfortunately passed away last year, arguably being the biggest hockey fan of them all.

”I’ve had a lot of good coaches along the way, but the ones who have helped me the most is my brother, my father and my grandfather”, Riley says. ”My grandfather really was my greatest supporter, and he drove me to countless 6–7 am practices. Without him I definately wouldn’t be where I am today.”

Grew up with the Oilers

Apart from taking Riley and his brother to countless hockey (and lacrosse) practices, Rudy also took the brothers to almost every Oilers game at the Rexall Place.

“We had a ten minute drive to the arena and grandpa took us to all the games”, Riley says with warmth. “We were super fortunate to get to see all those big league guys, and of course we really wanted to be like them. I never really had one player I looked up to, except for my cousin Matt whom I got to watch play in the WHL.”

Speaking of the WHL. That’s where Riley Sheen started to make a name for himself. Over the course of six seasons he represented four clubs, scoring at an impressive rate. Making that kind of impression in a league like the WHL normally attracts interest from NHL teams, but as aforementioned there’s nothing normal about Riley Sheens career. Instead of signing an NHL contract and perhaps playing in the AHL, he stayed in Alberta, playing minor league hockey. 21 years old, he played for the Northern Alberta Institute of Tech, and focusing more on his education than his hockey development. Yet again he scored points like he was stealing candy from a baby, and moved on to the Lacombe Generals. Still not the epicenter for NHL scouts, but in the small city of Lacombe, a spark in Riley Sheens game lit. The Generals won the Allan Cup, with Riley being a key player.

“That was a great experience and it was during my time in the Generals I figured out what I wanted to do with my life. That I wanted to commit myself full time to hockey”, Riley explains.

The career started moving in the right direction

However, no matter how good you perform in the Allan Cup, there’s not an endless amount of lucrative options to choose from. So Riley Sheen chose Canadian college. Unlike the WHL, Canadian college is not known for exporting players to the NHL. From a Canadian college the road to the NHL is long and winding, but Derek Ryan and Kodie Curran are two examples of players who have taken that path, with stops in minor European leagues before breakthrough seasons in the SHL leading to an NHL contract.

“Of course you want to look at guys who have done what you want to do and at an exceptionally high level too. There’s not many who can make the switch from playing college hockey at a higher age and keep developing, but both Kodie and Derek have been inspirations for me”, Riley says. 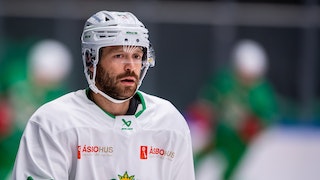 After being named a first team All Star at University of Calgary in 2018/19, the doors to professional hockey actually did start to open up for Riley Sheen.

“That year was instrumental for me. I played on a good team with good friends and gained a lot of confidence. I felt like it was now or never if I was going to be a professional player, so I took the chance, I poured everything in to it and didn’t look back.”

“Me and my agent looked at a few clubs at lower levels in Europe”, Riley continues, “but right before I was about to sign a contract I got a phone call from my agent. He was also the agent to a North American coach on a European team, and my agent said they needed an import player and that I was offered a contract. I felt like that was the highest level of hockey I was going to be offered and a good start to my pro hockey career, so I signed the contract.”

From Beijing to Bietigheim

The team he signed for was Beijing, a chinese based team playing in the Russian KHL:s farmers league, VHL.

“I got to experience a part of the world I would never have gotten to experience otherwise, and grew a lot as a person and as a hockey player. We travelled a lot and I learned how to treat my body to be able to play night in and night out. It was kind of a sink or swim situation for me.”

And as it turned out, Riley Sheen did not only swim, he crawled on a Michael Phelps-like manner, and actually attracted interest from KHL giant SKA St Petersburg. But then covid hit the world.

“It was a hard time and lot of uncertainty. Many players didn’t even find a place to play, so I took what I thought was the best option for me, signing with Bietigheim of the German second division”, Riley explains.

Another unknown place on the world map of hockey, and another success story for Riley Sheen. He scored 39 goals in 56 games, which finally helped the team to climb the ladder to the DEL, the top tier of German hockey. And despite the odds, the saga continued.

“People say you won’t be able to translate your game to the next level, but me and my teammates kept our confidence, and it turned out the way it did.”

Riley Sheen scored a massive 40 goals in 55 games in the DEL, and no matter the level those are impressive numbers. So what’s the secret to his goal scoring ability?

“You have to be able to shoot the puck, first and foremost”, Riley says. “I have an ability to think the game at a high level and I’m a quick player. I think that’s what has made me successful.”

Somewhere around Christmas at that second Bietigheim year, Riley got in contact with Chris and Cam Abbot of Rögle. They continued talking, and in the end the decision to move to southern Sweden was a no-brainer.

“I mean, if you look at Rögle and their success the last couple of years… I’ve seen them win the CHL and when your’re offered a spot in that kind of organization it’s hard to say no”, Riley laughs.

With the pre season in the books, and competitive games already on the schedule, Riley Sheen has started to get comfortable in his new team.

“We have a lot of smart, skilled players who want to make plays, I’m really excited and looking forward to contributing to the success of this team. The SHL is a high level league for sure, and the hockey here is played at a fast pace which suits me. I love to compete and give it my all, not taking a night off. Hopefully that will translate well to the SHL”, Riley says with a smile.

Even though he has high hopes of keep scoring, he refuses to set any personal goals for the season.

“If the team is successful, the players on that team will have success also. I just take one day at a time and focus on what I can bring to the team to win games. If that is scoring on the powerplay or defending, I’m just as happy.”

Time will tell if journeyman Riley Sheen will keep scoring goals on his unusual path through the hockey world. Regardless of that, he has undoubtedly come a long way from those years of playing minor league hockey back home in Alberta.