Despite a coaching change, Linköping continue to find ways to lose. Oskarshamn, however, broke their slump and snatched two wins during the week. Also, the World Junior players were back in action. Here's what went down.

IK Oskarshamn entered last week with a massive 16 game losing streak. On Tuesday, that streak came to an end as they steamrolled Brynäs 6-1 at home. After having a 2-1 lead in the first intermission, Oskarshamn scored four more goals to demolish Brynäs and two days later, they looked to be well on their way to a new massive win. That time, visiting Djurgården, Oskarshamn opened the scoring 20 seconds into the game through a nice shot by recent acquisition Max Veronneau. Already 33 seconds later they almost went up 2-0 but a massive Niklas Svedberg save stopped that attempt. Oskarshamn did however increase the lead as time went on and they were up 3-0 before Djurgården came back to tie it. Lance Bouma, another aqcuistion of late, scored the game winner with about five minutes to go. But Oskarshamn came back down to Earth Saturday as they lost 7-3 in Luleå.

Another team in the woes is Linköping. After their 3-1 loss at home to Malmö Monday, coach Bert Robertsson was fired, becoming the first coach of the season to get the axe. After the coaching change, where assistants Dennis Eriksson and Johan Åkerman together with Niclas Hävelid have been given the reigns, Linköping played three games. They scored first in all of those games, but couldn't keep it going and lost all three; 7-4 to Örebro, 4-2 to Brynäs and 3-1 to Rögle.

The aforementioned Djurgården also went through a difficult week, losing all three games and not looking very good in the process. On Monday, the lost the second game in Växjö on overtime before falling to Oskarshamn before a heavy 6-1 loss to Brynäs Saturday.

Among the teams winning most of their games, no team went undefeated. With every team playing three games last week, eight teams won two out of their three outings: Växjö, Luleå, Leksand, Malmö, Örebro, Rögle, Brynäs and Oskarshamn.

Looking at the league standings, Rögle sits on top with 63 points, thanks to their two wins, with Frölunda shadowing - one point behind. Växjö (third with 58 pts) lead a pack of three teams hunting the top. In the bottom, Linköping are in trouble being last with 27 points, one point behind Brynäs who's got a massive five games in hand. Linköping does, however have one game in hand to HV71, who sits 12th with 29 points.

Turning to the players of the week, we find Emil Pettersson of Växjö still topping the scoring with 35 points, followed by Carter Camper (Leksand) with 33. Two more have 30+ points to their name so far; Daniel Zaar (Rögle) has 31 and Marek Hrivík of Leksand has scored an even 30. And looking at the scoring in the past week, it is easy to see why Oskarshamn broke their slump; John Dahlström had the most points last week. In three games, he scored four goals and added three assist, and the 23 year old forward extended his point streak to four games in the process (4-4--8 points). Three players had five points last week, thereby shadowing Dahlström. Tyler Kelleher and Richard Palmberg, both of Oskarshamn, had a goal and four assist each. As did Linköping defenseman Jonas Junland.

The World Junior Championship players were back in action and Elmer Söderblom (Frölunda) scored his first SHL goal ever in the 3-0 win against Färjestad Saturday. 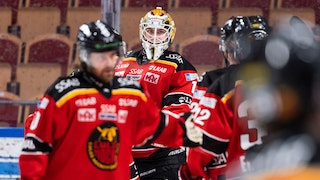 Goalie Jesper Wallstedt of Luleå saved all 21 shots against that very Frölunda team on Thursday (3-0 win), earning his second shutout of the season. Albeit not a WJC player, but the story of Fabian Lysell is worth bringing up; Lysell scored his first SHL goal ever in the same game. Lysell left the Frölunda U20 team in November to move to Luleå and what better place to score his first ever SHL goal than in his former home?

Other than Wallstedt, Johan Mattsson (Frölunda), Janne Juvonen (Leksand) and Viktor Fasth (Växjö) earned a shutout during the week. Fasth had his fourth shutout of the season, putting him in "first" place in terms of shutouts.

This week we have 16 games on the menu, split up on three game nights; Tuesday sees four games while Thursday and Saturday sees six. Here are a few games to keep an extra eye on: On Thursday, Skellefteå host Frölunda in what historically has been a battle between two powerhouses of the league. The same can be said of the HV71 versus Färjestad game playing at the same time, but now HV71 find themselves in a hole and they need to get things going.

With Covid 19 still making its way through the world, there has been some re-scheduling. That gives us a home-and-home between Örebro and Djurgården Thursday and Saturday. Will we se feelings carry over between the games?