With the world coming to a pause so did the German DEL, where Moritz Seider was due to play on loan from the Detroit Red Wings. Things went another direction and instead the German defenseman now is a cornerstone in Rögle for the remainder of the season.

Having come from German side Adler Mannheim, Mortiz Seider - or "Mo"as he's called by pretty much everyone - now has north of 30 SHL games on his resume. Based along the coast of southern Sweden, Ängelholm, where Rögle resides, is a bit different both to Mannheim and Grand Rapids where he played in the AHL last season.

"It’s really cool. Obviously the snow is a bit different to what I’m used to. But I’m enjoying the walks on the beach. It’s really cool. We got a lot of new snow yesterday so everyone was kind of excited. But shoveling is a bit of pain in the ass. All in all we’re pretty happy about this." Seider says with a chuckle.

Since the Abbott brothers, Chris (GM) and Cam (coach) took charge in the ongoing 2017-2018 campaign, Rögle has made a steady and forceful climb from the bottom to the top of the league, becoming a powerhouse in the process. With a fresh mindset brothers Chris and Cam have created something special.

"I think it is very clear that it is a young organization with a young staff around. The Abbott brothers are doing a phenomenal job, in my opinion. I can’t speak for the previous years, but I just really enjoy walking into the rink every single day." Seider says. 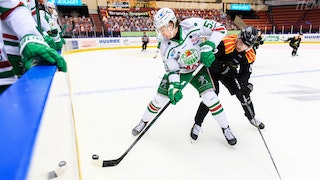 "The guys are making it so easy. They are very welcoming and greeted me with open arms right away. That was really cool and from now on it’s just about getting ready for the last few games. We have a really high expectation and everyone is dialed-in. I think that’s the key why we are so successful right now."

Comparing to the SHL and the AHL, there are both similarities and differences. But is there anything that stands out?

"It’s hard to say. I think there’s a good mixture of everything here. It’s just really cool for me to see how we are doing things this year. I mean, in the end it all comes down to winning games and we are trying to win as many as we can. I think that’s one of the key reasons. "

How did you end up here in the first place?

"I got a call from my agent one day once the German league was officially postponed and he said there was an offer coming in from Rögle. And then we just sat down with everyone and figured it out and I am really happy here. It was definitely the right step for my development. I’m so happy to be here and I’m really looking forward to the rest of the year because from now on, I think the last couple of games are going to be a lot of fun."

With just north of 30 games in the SHL, Seider is now more than familiar with the league and what it takes. But starting from the top, what does he think stands out in the league?

"It’s really fast. It all comes down to special teams every night. Your penalty kill powerplay gives you the chance to win it every night. You play a lot of game in a short amount of time and I think that was one of the biggest challenges for me this year - to be ready every single time. To bring my A game. I think for now, it’s working pretty well. I’m just trying to stay focused and hopefully get back on track as soon as possible."

Has the timing in your, quite frankly, A level hits been something you’ve had to work on coming back to the big rink?

"I always like playing a physical game. I think that’s just the answer, with me being that tall." he chuckles. "But I try to use it as an advantage to my game. But it’s always nice when you’re getting closer and you can get that hit. But it’s just a nice bonus, because in the end it all comes down to how you perform. Because nobody cares if you dish out hits and you still cost the team games. But it’s worked pretty good lately and I think the last couple of games are going to be a lot of fun. " 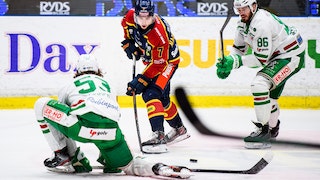 How important would you say this season is to you and what lies ahead for you?

"It’s very important. I enjoyed playing games in the AHL but that’s obviously not where I want to end up and I think the SHL is giving me a big push to become a better hockey player. And I’m learning a different culture to. This will be a good advantage to me getting ready for camp into the next NHL season.

Moritz Seider was five and a half years old when he started playing hockey. Getting the chance to skate at kindergarden, it was pretty much love at first sight.

"We got on the ice during the winter months and I fell in love with it right away. It was pretty cool just skating around and after a couple of times I had the chance to meet the hockey team and I was pretty fascinated. That’s what got me into hockey."

Did you play any other sports as well?

"I played a bit of soccer. I was also a track and field kid and I did some cycling as well. I was just trying to stay healthy and fit and as a kid you always want to try out as much as you can but I was always fascinated by the hockey. Within the track and field I did a little bit of everything but mostly long distance running like 1k, 3k and 5k runs. Stuff like that. That was always something that was pretty easy for me and it still is a big part of me, obviously with the summer training."

I ask if he keeps track of his running times, but he says no, laughing:

"I just do it because I have to. It’s not something I really enjoy", he says putting the emphasis on the word "really". "I just need to do it to get ready for the season."

Having gone through the Adler Mannheim system, Seider is one of quite a few young prospects coming out of Germany of late.

What is the secret behind the success of Adler Mannheim?

"I think first of all it’s a big, traditional club. They always have high expectations every single year. It’s not easy to always fit in and find a spot. But over the last couple of years the team is giving a lot of young players the trust and a spot. That’s the key for the future. You need to give guys the time and space to get confident and that’s what they’re doing. I think that’s the key to all the success they have right now."

You played with the Jungadler as well..

"Yes. The Jungadler is the youth program there and I think they’re undefeated for six or seven years now. So, yeah. There’s a lot of talent going through there. Before, the talent was going overseas to the major junior leagues and now, having a chance to play for the Adler, I think that benefits everyone. "

What was it like coming back to the big European rink after playing a year on North American sheets?

"Obviously here, you get a bit more time and space. I mean, I can play on both sheets. But yeah, in the end it’s just the time and space factor. But it’s definitely a great experience after having my first year in the AHL."

I recently spoke to Joe Veleno, and he said that at first he was a bit overwhelmed with the time and space given to him on the big rink. Now, turning that around: As a d-man, did that force you to adapt your gap control or did it come naturally, having played in Germany before?

"I mean, guys are way closer to you right off the start in North America. So gap control is definitely a big point, yeah. That was something we were focusing on early in the season and I did get better. Because once you are out of place here, there is pretty much no way to recover. That was the really challenging part but it was really fun to adapt."

The conversation revisits Joe Veleno again and the two are keeping in touch.

"We’ve been texting a lot. We roomed together last year in Grand Rapids. We shared an apartment, that was pretty cool. All in all, that was a fun year so we definitely stay in contact and we want to know what going on with the other." Seider says.

Lastly, are there any traits or things you've been trying to work on here in Sweden that you would like to bring back to North America?

"The key thing to me this year has been working on my shot, improving it. Getting more power and that’s been working really good. It obviously helps having a guy like Gélinas beside me with that rocket of a shot. That’s a nice feature to have and I’m trying to take advantage of that right now and hopefully it will benefit my future game."

Favorite movie: "'Good boys'.It’s about three kids who are coming out of fifth grade into sixth grade and they think they’re grown men. It’s really funny. It’s one of my favorite movies right now.”

Favorite TV show/series: "'White Collar'. It’s a little bit older but I think it’s one of the best out there. I’ve watched it multiple times both in German and English.”

Food of choice, when cooking: “Oh, that’s a good question. I’d probably say my favorite dish to cook by myself is steak with some onions and potatoes with a nice sallad. That’s probably not something you cook every night, but still it’s kind of nice. I definitely miss mom and dads cooking a bit. I’m nowhere near that but hopefully it’ll come with my age,” he laughs.

Favorite music: "Hiphop. I try to mix in a bit of everything. But mostly hiphop and rap.”

Favorite NHL team: "The Red Wings. That was really cool, an Original Six team. I was just fascinated watching them growing up. All these Hall of Famers coming out of there."