Almost 20 seasons after his SHL debut, Joel Lundqvist remains at the top of his game with one of the most successful organisations in recent years.

In a league that has turn around from season to season, where the standings are always tight right up to the playoffs, it's difficult to consitently find success in the SHL. However, the Frölunda Indians seem to be one of the outliers when it comes to constant success. The Indians have finished in the top three in the regular season every year since 2012-13 and in that span have won two championships and lost in the semi finals twice, an impressive record. This consistent success, Joel says, comes from the organization as a whole and being clear on what they want to achieve.

– We have a good organization for sure, the people around the team always put together a good group of guys. We also know what the goals are, both in the SHL and the CHL as well. All the players know the goals both for the team and the organization. I also think its been a challenge season to season, we've lost a lot of players and had to replace them. We had a lot of returning guys this season, which has been good for us, but maybe two years ago we had eight or nine new players. But as an organization we are very clear on the way we want things done and that makes it easier for new players to come in and perform well.

Just like all professional teams Frölunda has a wide range of ages on their roster. The youngest full time player this season is highly touted prospect Lucas Raymond at just 17 years old and 20 years his senior is the captain Joel Lundqvist. With an average team age of just under 27, Lundqvist thinks it's important to have a good balance of younger and older players.

– The younger guys are hungry, we older guys are as well, but they just go hard everyday and they really push the older guys to do their work. The right balance is very important, those seasons we've been good we've had a mix of young and old players. Thats been similar throughought my career, when I've been on a winning team we've had that balance and it really creates a good environment for the team.

The teams success also might owe a bit of credit to their junior programs. Rasmus Dahlin is certainly the most well known of the recent young prospects that have had great success in their young careers. Lucas Raymond is expected to go high in this years NHL draft and current Frölunda players such as Johan Sundström, Simon Hjalmarsson and even Lundqvist himself came up through the Frölunda Juniors organization. Joel thinks the organization provides a good environment for young players to flourish and find success.

– It's a good atmosphere for them to be in, we have a great setup and campus where we practice, great gym facilities. The standard is high in practice and games and it's a good environment to be in if you're a young player. It's the same as the big team, we have a good structure for the young players in the program.

As previously mentioned, the league is always tight and always competitive. With lots of player turnover from season to season, teams who missed the playoffs one year can be a top team the next. Two perfect examples this season are Rögle and Örebro. Both teams just snuck in to the playoffs last year after having struggled through the season, this year they are two of the teams to beat. Örebro currently sits third overall and Rögle is in sixth. This kind of competitiveness, Joel says, provides a good challenge for all teams.

– It's a challenge for sure, as a team everynight it's tough to get points. You have to be prepared, but it gives an opportunity for every team to perform well because the difference is so small between the teams. It's a good thing for sure, but as a player it's really challenging because you have to make sure that you perform at your best every night. 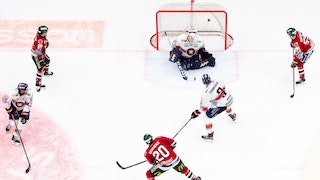 The SHL has a long history of North American players making the trip across the pond to lace up on the big ice. However, this season has seen a sharp decrease in talent from the US and Canada. With just 20 Canadians and 14 Americans on the ice this season, the league has seen its North American content cut almost in half from just two seasons ago. Joel says he believes this is due to more teams being a bit cautious about North American talent that can't cut it in the SHL.

– The top players for sure are great, we have a bunch in our team that are helping us win games and titles. But the league doesn't need North American guys that are going to be third and fourth line players. The imports that come here should be top players in the league. It's a tough league to play in and I really like the top players we have on our team and other guys around the league, those guys are good for the league. But in the past a lot of teams have signed North Americans and they didn't know much about them and they stayed for a short time and didn't work out. I think teams are more careful about that these days.

Drafted 68th overall in 2000 by the Dallas Stars Lundqvists career didn't immediately take him across the pond. Like many young Swedes drafted to the NHL he spent a number of seasons in the SHL to further develop his game. But he finally pulled the trigger in 2006 and suited up in Dallas.

– It was a great time in my career to play in the NHL and AHL and see how life is over there. I felt like I had more of a role on the team over there at that time. Everything around the league over there is great, it's the best league in the world, so as a player you can't really complain, it's a great environment to be in. I made great memories and it was a lot of fun. I missed Sweden during those years for sure but I really enjoyed playing in those two leagues.

Lundqvist started his SHL career at 17, with nine games played in the 2000-01 season with Frölunda. Almost twenty years on he is now one of the most respected veterans in the league and at 37 years old, shows no signs of slowing down. With 17 games played this season he is on pace to put up more than 30 points for the second season in a row. Most players would consider themselves lucky just to make to 35, but to still be putting up points at 37 is a feat rarely achieved by any player. He credits his longevity to his work ethic and his desire to constantly improve. 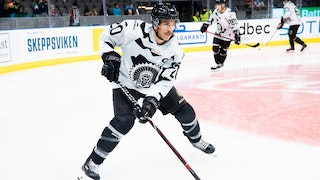 – I like to train, stay in shape. This is a good environment to be in as well, lots of good players and coaches around me to keep developing my game. I still try to be better in a lot of areas, try to find new stuff. I think that's the key when you get older, don't get satisfied, don't get soft, just try and improve every season, that's my goal when it comes to getting older.

With hockey taking up the majority of his time he also has a another pretty important job away from the rink... being a Dad.

– Away from the rink is family time for sure. I have three kids and they're starting to do a lot of activities and sports, so that takes up a lot of time. I try to be there as much as possible to help with practice and games. Our son is 8 and he's playing hockey, our two daughters 11 and 4 are playing other sports, so away from the rink is family time.

Movie: Don't have a lot of time for movies, but I like Wedding Crashers.

Music Genre: Classic Rock, I like U2 a lot