After quite a few years in North America, the current chapter of his hockey story is being written in Leksand, where he signed earlier this year. From bouncing around, he's now firmly in one place for now. Meet goalie Kasimir Kaskisuo.

Born and raised in Finland, Kasimir Kaskisuo left his home country back in 2013 to play in the NAHL with the Minnesota Wilderness before joining University of Minnesota Duluth where he played for two years. After that he spend most of his time with the Toronto Maple Leafs organization before ending his career in North America - for now - with the Nashville Predators. This season, he's the backbone of Leksands IF.

Leksands IF has a widespread fanbase across Sweden and their history stretches back to 1919, when the club was formed. They are four-time Swedish champions, but the last time a blue-and-white player got to hoist the trophy, these days called the LeMat Trophy, was back in 1975. Now, after a few years yo-yoing between the SHL and HockeyAllsvenskan, Leksands IF has established themselves as a middling team with the ambition to push the envelope even further. However, in the first game of the 2021-22 campaign, they came up short against the Malmö Redhawks, losing 4-3 at home.

"It sucks that we lost. But at least it’s over with. There are some areas to improve, both for me personally but also for the whole team. I could’ve made some more saves and it ended up being a one goal game. " Kasimir Kaskisuo says, referring to his first ever SHL start. 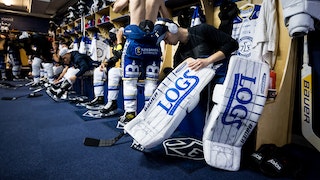 Kaskisuo preparing for his SHL debut

He's been a part of Leksands IF since back in spring when he, in a golf cart outside Nashville, signed his deal to come to Sweden.

How would you compare the facilities to, let's say, the AHL?

"I feel like there’s a big difference between the AHL teams and their facilities. Some of them are NHL level and some of them are pretty outdated and have fallen behind." he says, continuing: "I think what we have here in Leksand is perfect for us, the rink is perfect and the arena fits more people than there is in Leksand. It’s awesome. As players and as a team, we get what we need. We have access to a great gym right next to the arena. There are no complaints here, it’s one of the best setups I’ve had during my career."

The aforementioned pedigree and club history has not gone unnoticed by Kasimir Kaskisuo.

"It’s just like, you can tell from the fanbase… even if it’s a smaller town. Everybody is so passionate. I’ve had to drive to the airport a couple of times and everywhere you see team flags. It’s great, everyone cares so much. The fans take it more personally than the NHL fans almost. It’s something I cherish, being part of the community here and the team. It’s a great fanbase and a great place to be."

In a previous interview with SHL.se, published in Swedish here, the goalie praised goalie coach Alex Millner and said the coach was one of the reasons he signed with Leksand. The head coach, Björn Hellkvist, has previously been praised by players for his way of running things.

"He’s a younger coach and the guys really like him. He almost wants to be like one of the guys and there are times before practice when he just hangs out in the locker room." Kaskisuo explains. "But at the same time he definitely has that authority and obviously guys respect him. He knows what he’s talking about. For me, as a goalie, I think he just kind of leaves me be and hands me off to Millner. I think he has a lot of respect for Millner and what he does. I think they’re on the same page as a coaching staff and that involves me."

"Things went well in the Champions Hockey League but now we lost and we’ve got some things to work on. He has that side that can push the guys as well. But for sure, for the short time I’ve been here you can definitely tell why he was the Coach of the Year last year. "

Being back in Europe means being back on the bigger ice. But the transition from North American style of hockey to the one in Sweden has gone pretty well, Kaskisuo explains. Now, granted, he's not all too happy with the performance in the regular season opener. But he's not dwelling.

"It’s over when you leave the rink. When I get the gear off is when I try to let it go. During the season there are so many games coming up. You have to move on. You take with you what you have to fix. But yeah, you can’t hang on to bad stuff or a bad goal."

Matt Tomkins of Frölunda told me the other day that in the beginning he kind of prepared for shots that never came, did you do the same?

"Yeah, for sure. During the first exhibition game that happened for sure. I think the first goal I got scored on was a powerplay goal. The guy was on the puck and he started skating down and I hadn’t played for a year and a half and for me, all my instincts were saying that he’s going to shoot and he ended up passing through our box to a onetimer pretty much to an empty net. It’s definitely that you have to be more aware of the other players. It’s not that tight in the middle and guys are looking for those passes. For me it seems like a good balance between shooting and passing." 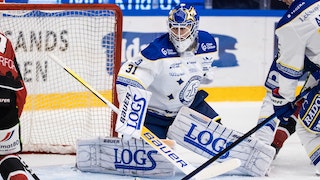 But at the same time it's all about patterns.

"The big rink slows things down for me as a goalie. It’s not like the guys comes off the boards and throws it on the net. Now they’re going into the corners and start battling it out and looking for a pass. It probably took me a week to kind of notice the patterns. It feels normal now. But it’s a little different kind of game. No issues, it’s all about reading the patterns."

Born in Vaanta, Finland, Kasimir Kaskisuo picked up hockey early on. When recalling, he says he thinks he started skating school aged 2 or maybe 2,5 years.

"That was right around the time when Finland won the World Championships in Globen in 1995. That was a huge thing for Finland and still is, that whole ‘95 championship. I was standing in front of the TV watching the tournament. Jarmo Myllys was in the net, he’s a legend. And I think he probably had something to do with me being a goalie. It was something with the helmets and the gear. It seems like and individual sport within the team. The goalie is someone who’s there and always gets involved and talked about. I think that’s why I was drawn to that." he says. And a question sparks up:

"Myllys played here for a while, right?"

The netminding hero did indeed. Myllys played with Luleå for seven seasons between 1994-2001, taking the team to their first and, as of now, only Swedish championship title in 1996. He ended the Swedish part of his career in 2004 with HV71. When informed of this, Kaskisuo says: 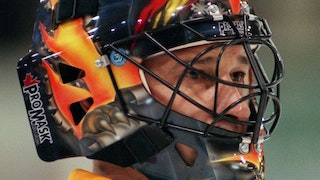 Jarmo Myllys back in the days with Luleå Photo Credits:Peter Krüger, Bildbyrån

"It was he and Fredrik Norrena", referring to yet another SHL legend. Norrena played with AIK Stockholm, Frölunda, Linköping and Växjö for a total 333 games spannig across nine seasons on and off between 1996 and 2013. "They were the big guys. I went to his hockey camps growing up."

In North America, you’ve had to adapt to some unfortunate circumstances, may it be salary cap things or other stuff, forcing you to move and move on. Is there a different sense of calmness playing in the SHL with Leksand now? There’s no farm system, and trades are rare to be seen.

"For sure. It gives me the college hockey vibe. You go to school and you’re there for four years and there’s no changes. It’s fun. Obviously you got to earn your playing time but it’s more controlled place where you can build. It’s more of like a team thing, you try to do everything more of like a team rather than individually trying to get goals and points and move up or to avoid getting sent down. I think it’s about being valued and that’s been the biggest thing being here in Sweden. It’s more of a team first kind of feeling. We’re the top of the organization. We’re getting valued. It’s refreshing to be somewhere where you can be a big part of it and kind of see your impact here."

The lengthy talk has come to an end for now, but with the Kaskisuo saga in Sweden being in the beginning, we might have a reason to get back to the Finnish netminder in the future.

Favorite Movie: “Anything from Marvel is always a good time”

Favorite food when cooking: “Frozen pizza, haha!” My wife’s back in Nashville now….I guess I make some pretty good tacos”

Favorite NHL Team: “The team that’s going to sign me next, haha!”