Ty Rattie plays his first season in the SHL. Here's his story on how he ended up in Timrå, enjoying Sweden, playing baseball, and facing the structure that is the SHL.

Timrå IK are making their case to avoid the relegation battle down the stretch of the regular season. When SHL.se reaches Ty Rattie, spirits are high.

"It’s positive. Obviously we’re not in the spot we wanna be right now but we’re right there and I think we’ve been playing some really good hockey in the past few weeks. We’ve got nine games left [at the time of the interview]. We’ve got seven games at home and we’re a really good home team and if we keep playing the way we’ve been playing I think we’re gonna be in the spot we want to be. We believe in the dressing room. It’s an exciting time. Everyone’s gonna have to buckle up and do what we can" he says.

Rattie has found his place and with seven games to go, he has 43 points to his name in 45 games, 19 of those being goals. But let's roll it back a bit, how did he end up in Timrå prior to this season?

Every now and then you hear the story of a former teammate getting someone to join a team. And that was exactly the case with the matchmaking between Timrå IK and Ty Rattie.

"You always hear good things about the Swedish league and how highly regarded it is. That’s why I kind of wanted to come here. Lucky for me, I built a pretty good friendship with Anton Lander who has a lot of pull here in Timrå. He got in contact with me and asked if I was interested and I said “For sure”, so we started talking with the team and then it happened pretty quick. I’m glad it happened, I’m thankful for my friendship with Lander" Rattie explains.

And despite the rollercoaster season, he's enjoyed his time in the northern part of Sweden.

"It’s awesome. Everyone in this country is friendly, it’s a very nice, scenic country. My wife and I really love it here and the people has been awesome. We love Sundsvall and the fans of Timrå are crazy and very passionate. We appreciate that, we have no complaints so far. We’ve really enjoyed our season here." 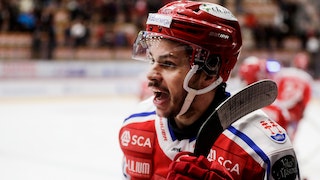 The SHL is often credited as being a structured league and that's something Ty Rattie seems to agree with.

"Everyone works very hard. It’s a skilled league. And of course, with the bigger ice it’s not as easy to get scoring chances. Teams clog up the middle a lot. All teams are evenly matched, any team can win on any given night. That’s exciting, I like that. I really enjoy the league, the style of play. And just an added bonus is that the Swedish guys are so easy to get along with. They’ve been very welcoming off the ice" he says, reiterating his appreciation for being here.

With the big rink in Sweden comes a difference from North America as well as Russia and Finland (using the hybrid rink). And with that comes a lot to digest.

"All kind of skilled guys like the bigger rink because you get more time and space. But at the same time it’s a lot harder to generate chances. You’re so far on the outside from the net, it’s not even worth it to shoot the puck half the time because the goalies are so good and you’re so far from the net. There are differences like that. Even beating a guy one-on-one, you beat him and you look up and you’re still so far from the net. There’s differences for sure on the ice. But there are pros and cons to it" Rattie says.

Can the rarity of scoring chances be frustrating or is it just a matter of getting your head down and grinding away?

"You definitely have to be a little bit more patient. Teams sit back and that’s tough to play against. When you get a good chance and you don’t score, you feel a little bit of disappointment, because it’s so hard to get chances. It’s such a high-end league and you play such high-end players. There’s always going to be chances, but it’s tough. At the same time it’s exciting, and I’ve really been enjoying it so far."

You've played in the NHL, AHL, KHL and now the SHL. Where would you rank the league?

"I think it ranks right up there with the KHL. The KHL, the AHL and the SHL are top leagues and produce top players. You see it every year, the Swedish league produces top players. The style of play is different, because the Swedish league has the bigger ice whereas Russia has the smaller ice. But both are very high-end leagues." 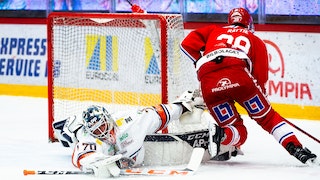 A few months ago, Cameron Brace spoke to us about his love for baseball. And when we rewind the career of Ty Rattie to childhood memories, baseball plays a prominent role in his upbringing as well.

"I’m from a big baseball family. My family loves the Toronto Blue Jays and we played baseball every summer growing up. I actually got kind of good at it and I had to make a decision between hockey and baseball later on. I was better at hockey at the time so I stuck with hockey, and I’m glad I did because it’s taken me on some pretty cool adventures and I’ve really enjoyed the ride so far."

What did you play and where did you end up in baseball?

"I’m from a smaller kind of town. I played shortstop and I was pretty good on that team and I made the regional team and I realized I wasn’t as good as I thought I was. There were so many good players out there and I spent that tournament sitting on the bench. I find baseball to be so cool and so fun. Just hanging out in the sun with the guys and being outdoors. It’s a very cool sport and I still play softball with my buddies back home. "

He can't really tell when his hockey playing days began, "maybe I was four or five years old". His father is a huge hockey fan and:

"We’re from there’s hockey everywhere. I’ve been skating and playing since I was very young and like I said, it’s taken me on some pretty cool adventures. I’m very grateful for what it’s done for me."

Looking up his player profile online, it's not hard to see he had a neck for the sport at an early age, scoring heaps in the midget and junior leagues. But when did he realize he maybe had something other players didn't?

"I played on some good teams when I was younger, and when you play on good teams your stats are going to show that. But having said that, in the WHL bantam draft I ended up being picked pretty high. I think that’s an accomplishment at that time and that was an exciting time for me, playing for the [Portland] Winterhawks and realizing that there are NHL scouts at every game. That kind of made me think that this could be a job or a profession. That was around the time it kind of got more serious and more exciting."

You've seen different part of the world which begs the question: Do you keep a journal or write things down for some sort of memoirs down the line?

"I don’t, but I know some day I’ll look back and kind of wish I did. There are some cool things that happened and especially playing overseas, there are little things you might forget about. Looking back on it now, it’d be cool for someone to do that. But the big things are captured on the iPhone and you always remember them. I’m grateful for what has been and I’m looking forward to what’s coming."

What's coming next for Timrå is a fight to avoid relegation. Ty Rattie is ready to be a part of that. If the season so far is anything to go by, that part can be quite big.