After the cancellation of the post season and play-out round last year due to the pandemic, playoff hockey returns to Sweden for the first time in more than two years!

The first round of the playoffs featured a pair of matchups that included a trio of teams that some people may have been surprised by. Given the success of Färjestad, Djurgården and Frölunda in recent seasons, seeing all three of those teams finish outside the top six was not something a lot of people had predicted at the start of the season. The fourth and final team however, the Malmö Redhawks, claimed a hard earned spot in the post season after a stunning turn around and incredible winning streak to lift themselves out of the leagues basement. The matchups were set as Malmö would play Färjestad and Djurgården would face off against Frölunda in a best of three series.

It all kicked off on Monday night with a pair of games. Despite a great performance by Mantas Armalis between the pipes, which saw the Djurgården goalie turn aside 34 out of 36 shots faced, Djurgården could muster just a single goal of their own on just 19 shots on target. A late empty net goal from Nicklas Lasu sealed the deal and Frölunda grabbed the early 1-0 lead in the series. The other game of the night also ended in a 3-1 victory, this one for Färjestad. After giving up a pair of goals in the first frame, the Malmö Redhawks were unable to mount a successful comeback. A tally from Matt Puempel in the second period pulled them within one, but that was all they could muster as Färjestad sealed the deal with an empty netter in the third to grab a victory away from home in game 1.

Tuesday featured just one game, however it was arguably one of the most anticipated games the post season will have as HV71 and Brynäs faced off for the start of the play-out round to determine which team would be relegated and which would live to play another season in the SHL. Coming into the game these two teams had battled to 2-1 overtime victories in their previous three meetings and this game would be no different. Both teams looked a bit timid in the first period, perhaps overly cautious in an effort to not make a mistake. The first tally of the game came courtesy Emil Molin as he was able to ripple the mesh for Brynäs about halfway through the first frame. HV71 was finally able to answer back in the third with a goal from Arttu Illomäki and the post season would get its first taste of overtime action. Despite a hail storm of shots from Brynäs in the overtime frame it appeared as if the game would require a second overtime period. However with just 46 seconds remaining in the period Linus Ölund would score a somewhat controversial goal that required video review but was found to be a good goal and the game winner. 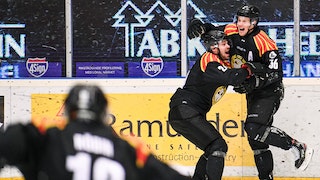 Wednesday night was game two for both the Malmö/Färjestad and Djurgården/Frölunda matchups. Given the fact the first round is a best of three, both Färjestad and Frölunda had a chance to win the series and move on to the quarterfinals. After scoring just the one goal in game 1, Djurgårdens offence came out flying in this one as they opened up a 5-0 lead by the halfway mark of the second frame. Despite a pair of goals from Frölunda in the second, Djurgården would add two more and come away with the big 7-2 win to force a third a deciding game for the series. The other game on the night was a much closer affair as Malmö and Färjestad went tit for tat, neither team ever having more than a one goal lead. A goal late in the third with the net empty for Färjestad was a heartbreaker for the Malmö players and fans alike as this game would be forced into overtime. There was only one shot needed in the overtime frame as Oskar Bäck completed the comeback for Färjestad and sealed the 5-4 win and the 2-0 series victory for Färjestad.

Thursday nights matchup was the only game of the evening as Frölunda and Djurgården faced off in a deciding game 3. Despite their offensive outburst in game 2, Djurgårdens scorers were stopped at every opportunity by Johan Mattsson in this one. A three goal third period boosted Frölunda to a big 4-0 win, claiming the opening series 2-1. With the results from the first round now decided Rögle would be facing off against Frölunda and Växjö would be matching up against Färjestad.

After yet another 2-1 victory for Brynäs over HV71 on Friday night, the weekend matchups were ready to kick off with a pair of games on Saturday as Rögle and Växjö prepared for their first taste of playoff action. After the cancellation of the post season last year, this would be Rögles second post season this millenium and just their third in club history, and they did not dissapoint. A dominant performance by the whole team held Frölunda to just 16 shots on net and four goals was more than enough to claim the victory. The 4-0 shutout marked a historic moment for the club as it was their first ever post season win.

Game 1 between Färjestad and Växjö was a much tighter affair as both teams scored a pair of goals in the first as Växjö jumped out to a 2-0 lead but Färjestad managed to even the score before the end of the period. Another tally by each team in the third forced the game to overtime. This game also needed just a single shot in the overtime frame as Fredrik Karlström played overtime hero with a great burst of speed to create a partial break for himself and buried it to claim game 1 for the Lakers.

The final game day of the week came on Sunday afternoon as all four series were featured. Our first look at the Örebro/Leksand series turned out to be a bit of a barn burner as Örebros offence came to life and their defence managed to shut down Leksands red hot scorers. Örebro claimed victory in decisive fashion with a 6-1 victory. Game 2 for Rögle/Frölunda saw a great follow up by the team from Ängelholm as they managed another victory with a 5-2 win to take the 2-0 lead in the series. Färjestad and Växjö once again put forth an extremely exciting back and forth game, including a five goal second frame and a pair of quick goals from the Lakers in the third propelled them to the 5-4 win.

The fourth and final game of the day was one of the more anticipated matchups of the first round as northern rivals Luleå and Skellefteå squared off for game 1 of their best of seven series. It was the first time since 2013 that these teams had met in the post season and Skellefteå had won the season series 3-1. It looked as though Skellefteå might have a runaway victory on their hands in the first period as a pair of goals just 61 seconds a part gave them the early 2-0 lead. However, just over a minute after the second goal, Luleå answered back with a bit of a fortunate bounce that popped up and over Gustaf Lindvall to pull the game back within one. Despite the early flurry of goals the game would not see another tally until the third period. Linus Klasen has a chance to even the scoring in the second with a penalty shot, but his effort found the underside of the crossbar and stayed out. It wasn't until a long shot from Pontus Själin found its way through that Luleå was able to tie the game and force extra time. Despite a plethora of scoring chances from both teams, including multiple breakways and powerplay opportunities, the first and most of the second overtime period were devoid of any scoring. It wasn't until the final minute of double overtime that a blueline shot from Niclas Burström took a slight defelction and found its way home to give Skellefteå the victory and the series lead. 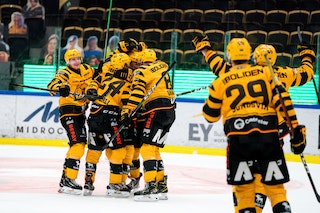