With the semi finals underway coming into the week the series between Luleå and Frölunda was locked at one game apiece after Frölunda took the opening game with a big 6-3 victory and Luleå answered back with a 4-2 victory in game two. Tuesdays game took place in Luleå and they made home ice advantage count.

The game was fairly evenly matched throughout, however neither team mustered a massive amount of shots on net as the game would finish 23-21 on the shot clock in favour of Fröunda. However, that doesn't mean there was a lack of scoring.

It was Luleå who would strike first and strike twice in the opening frame as post season point leader Linus Omark would continue his hot streak with the opening goal. Olli Nikupeteri would add another before the end of the frame and Luleå would carry the two goal lead into the second period.

Just one goal was scored in the second, as Frölunda would reach double digits on the shot clock in the frame. One of their ten shots in the second would ripple the mesh courtesy Filip Johansson and Luleå would carry the tentative one goal lead into the final frame of regulation.

The final period would actually see the least amount of shots registered on target, but would also see the most amount of goals scored. Carl Mattsson would put Luleå back up by two in the second half of the period, but Frölunda would answer right back with a marker from Andreas Borgman. Linus Omark, however, would seal the deal with an empty net goal, putting Luleå up in the series 2-1.

Thursdays matchup was back in Gothenburg in front of a packed house at Scandinavium. Unfortunately for the home team fans, the game would not turn out the way they had hoped.

The shots were once again on the low side, but only for Luleå this time as they would muster just 16 shots on net the whole game and Frölunda would register 27 of their own. Despite this fact it would be Luleå who would be the only team to find the back of the net, and they did so twice. Juhani Tyrväinen would open the scoring in the second period and the only other goal of the game would be an empty net goal scored by Isac Brännström, on his birthday, late in the third.

Turning away all 27 shots he faced, and arguably the best player on the ice for Luleå, Joel Lassinanti registered his first shutout in the post season and just his fourth career post season shutout.

With the win Luleå now had an opportunity to win the series at home on Saturday afternoon and send themselves to the final.

Saturday afternoon in Luleå presented a great opportunity to the hometwon team. Punch their ticket to the finals with a win, and that's exactly what they did.

The shots were, once again, very low on both sides in the game. Luleå registering just 17 shots on target and Frölunda with just 21 of their own. But again, their lack of shots did not mean a lack of offense for Luleå.

They would strike twice in the opening frame and Frölunda once. With the 2-1 lead heading into the second frame they were able to increase their lead to two with a powerplay marker from Jonas Berglund. The third period, despite the need for desperation for both teams, would see just 4 shots on net total. Three for Frölunda and a lone shot from Luleå that would be an empty net goal courtesy Linus Omark, securing the victory in both the game and the series.

With the win Luleå advances to the final for the first time since 2013 and will be looking for their first Le Mat Trophy since 1996. 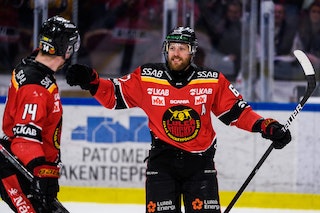 Brian Cooper made a lateral move this week as he announced he will be joining the Växjö Lakers next season. Cooper has played two seasons on the blue line with Oskarshamn, wracking up 34 points (6G 28A) in 102 games played over the pair of seasons. He also represented the US at this years Olympics in Beijing.

– Brian has greatly impressed us the last two years. He plays a game that we think will fit in very well with us, says Växjö's sports director Henrik Evertsson.

The contract is valid for the next two seasons

Skellefteå made their first signing of the off season this week and was a move that added a solid young prospect to their roster as they have recruited Anton Olsson. Olsson, who was drafted 72nd overall by the Nashville Predators, spent most of the last two seasons playing with the Malmö Redhawks.

– It feels good to secure Anton. A young player who has managed a lot for his age. We hope to be able to help him in his development as an all-round defender, says Skellefteå's GM Erik Forssell

The new contract is valid until the end of 2024 season. 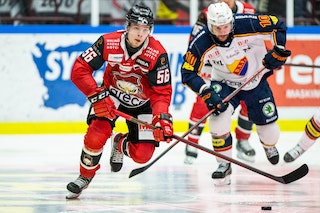 Oskarshamn went outside of Sweden for their newest signing, recruiting Czech forward Jiri Smejkal. The 25 year old pent the last two seasons in Finland playing for Tappara and the Pelicans. He also played two seasons in the WHL before a brief stint in the KHL.

– I played center when I was younger but the last five or six years I have mostly played out on the left wing. I think I am strong, good on the puck, use my body a lot in my game and like to be in front of the goal. At the same time, I'm not afraid to block shots and play a good defensive game. In short, I would say "two-way-power forward", says Smejkal

The contract is valid for the next two seasons

It comes as no surprise that the young and undrafted Strauss Mann would get some looks from big clubs this off season. The 23 year old American appeared in 22 games with Skellefteå this season, posting a 2.19 GAA a .914 SV%, had 3 shutouts and posted a record of 13-9. He also represented the US at the Olympics in Beijing. All those stats added up to some serious looks from NHL teams and San José was the one to scoop him up. The Sharks have offered him a one year deal, the terms of the contract have not been disclosed at this time. 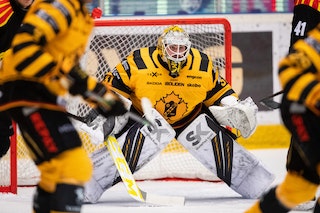 Mann was not the only young prospect to sign an NHL contract this week and Simon Edvinsson was offered a three year entry level contract with Detroit. The Red Wings selected Edvinsson sixth overall in last summers entry draft.

David Rautio has made a lateral move this week. After not seeing much action between the pipes this season with Linköping the 36 year old veteran will be joining Timrå for next season.

– In David, we get a very experienced goalkeeper who knows what it takes to perform at this level. He is a really technically trained goalkeeper with good positional play. We will have a good goalkeeper pair in Jacob and David in the coming season, says Michel Zajkowski, goalkeeping coach in Timrå.

Linköping also made a big aqcuisition this week as they have signed forward Ty Rattie. Rattie scored 47 points this season, including 13 powerplay goals, which was second best in the league.

– We identified early on that Ty was a player for us and we have since worked hard to make it happen. It feels great that he wants to come to Linköping and be a part of the journey we have begun. We want to take the next step and the recruitment of Ty is a step in that direction. He is a type of player who will fit well into our team, says Linköping's General Manager Niklas Persson. 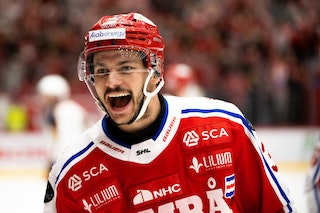