With the past week behind us, we take a look at player and personnel moves within the league and highlights from the weeks action. This week features a prospect extending his contract with Rögle, a pair of defenseman lead the league in goals and the Växjö Lakers pay tribute to their former head coach.

Off to a great start to this season, the team from Karlstad has claimed points in all three of their games so far, including a 4-2 victory over the Lakers on Thursday and a hard fought shootout loss to Linköping on Saturday afternoon. The team is currently lead by Theodor Lennstrom, Marcus Nilsson and Joakim Nygård who all have four points in the first three games, most impressive of which is Lennstrom who is tied for the league lead in goals with 3. Thanks to their early season success they currently sit alone at the top of the standings with seven points in three games.

MVP of the Week

Jonathan Pudas put forth an incredible performance this week in three games played. It started on Tuesday night as Skellefteå faced off against Linköping in the only game of the evning. Pudas scored a goal and added a pair of assists to help his team defeat LHC 6-2. Pudas did not register a point in their Thursday matchup against Leksand, in fact no Skellefteå player did as they were narrowly defeated 1-0. They were back in action on Saturday against Rögle and a pair of goals from Pudas helped them secure a 5-2 victory. Pudas now sits atop the points leaderboard with three goals and three assists in his first four games of the season. He is tied with fellow defenseman Theodor Lennstrom for the league lead in goals. 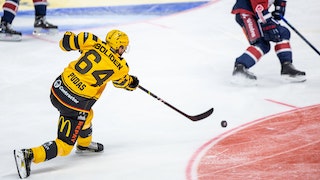 19 year old Linus Sjödin has signed a contract extension with Rögle this week. The young forward is a home town boy, having been born in Ängelholm, and has spent his entire career with Rögle. He came up through their junior program and got some solid ice time with the big team last season, appearing in 49 games. He was also a late round draft pick by the Buffalo Sabres in this summers NHL entry draft. Rögle has signed him for another two seasons.

– Linus is a very good example of how we want to develop our young players. He has gone from junior to establishing himself in the A team and he continues to develop all the time. He has played JVM and was drafted by Buffalo which says something about the steps he has taken in his game. We look forward to continuing to work with him, says Rögle sporting director Chris Abbott

Sjödin is also happy with the new contract.

– Of course it feels very nice. It is still the parent club that you represent, so when they come and tell you that they want to extend, it wasn't that difficult to say yes, says Sjödin.

Long time Växjö Lakers coach Sam Hallam was honoured by the team on Saturday before their home opener. Hallam Left Växjö at the end of last season to join the National Team as the head coach of Tre Kronor. During his ten seasons as head coach in Växjö Hallam won three Swedish Championships and was named SHL Coach of the Year in 2016/17 and 2017/18. 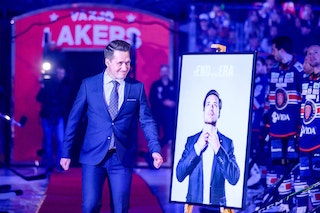