With a bit of an unusual schedule this week, due to postponements, Frölunda had just a single game over the past seven days, but it was an important one.

Coming into the contest against Rögle on Saturday afternoon, Frölunda sat five points back of the league leaders and were looking to reel them back within striking distance. Not only were Frölunda looking to gain points on Rögle, they were also looking for some revenge as Rögle knocked them out of the CHL with a semi final win on Tuesday evening. That win was also the ninth straight victory (SHL and CHL combined) for Rögle against their rivals from Gothenburg. That CHL loss on Tuesday also meant that the CHL would have a new champion for the first time since 2016 as Frölunda was looking for their fifth straight CHL title this season. Their was no CHL tournament last season because of COVID-19.

Neither team had been on much of a hot streak coming into the game as both had won just two of their last five and were both looking to secure their second victory in a row.

Despite Rögles recent dominance over Frölunda, Roger Rönnbergs team put forth a complete and dominant performance in this game. However, the game got off to a quick start for Rögle after Dennis Everberg was able to ripple the mesh with less than five minutes elapsed in the first frame. After his 16 game point streak was broken on Thursday night, Adam Tambellini got the first assist on the goal and was back on the score sheet. Through those 17 games, spanning back to November 2nd, Tambellini has scored 27 points, including 15 goals. Unfortunately for him and the rest of the Rögle team, that opening goal would be the only offence they would muster. 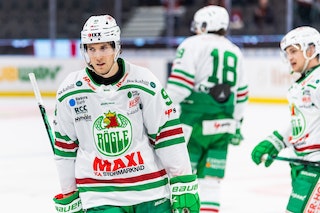 Despite being outshot in the first period, Rögle managed to hold on to the 1-0 lead heading into the second frame, but it didn't last long. Frölunda came out in the second and opened the period with a pair of goals in quick succession just over five minutes into the period. Andreas Borgman and Theodor Niederbach scored just 26 seconds apart to give Frölunda the one goal advantage. Frölunda would continue to pour it on in the second period as they registered a total of 13 shots on net. They would ripple the mesh one more time, courtesy Elmer Söderblom, and carry the two goal lead into the final frame of regulation.

The third period would be much of the same for Frölunda as they would once again register 13 shots on target and, this time, they held Rögle to just three of their own. Although they didn't need anymore offence, Frölunda secured the victory with a fourth and final goal from Max Friberg late in the frame. With their first victory over Rögle in nine straight games, Frölunda claimed an all important three points to move themselves within striking distance of the top spot in the league. They now have 59 points on the season and Rögle sits just ahead with 61. Frölunda also has a game in hand against the league leaders. 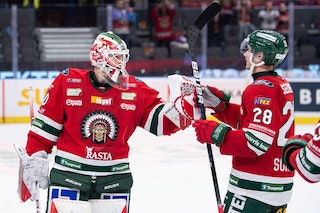 One of the main stays of the Växjö Lakers blueline over the past few seasons has extended his contract with the team. Joel Persson has inked a deal that will see him remain with the team until at least 2025.

– It feels extremely gratifying that we have found a new agreement with Joel Persson. Joel's contract, which extended for next season, included a foreign outing after this season. We have now replaced that agreement with a new three-year agreement that will take effect on 1 May. Over the years, Joel has grown into one of our most important players both on and off the ice, says Lakers sports manager Henrik Evertsson.

Perssons path to the big leagues was a bit unorthodox. He first joined the Lakers in 2017/18, coming straight out of HockeyEttan. From there he put forth two solid seasons, which got him looks from the NHL. In 2019/20 He played 13 games for the Edmonton Oilers and 34 games for their AHL affiliate before returning to Sweden last season. Persson has registered 3 goals and 15 assists in 31 games played this season.

The young Linus Sjödin has been rewarded with a contract extension. The 19 year old started his SHL career last season with Rögle and has developed well with the club.

– He has everything we are looking for in a young player. He has quit his job and now signed a new contract. He has had a good development in recent years and has shown that he can be effective in the SHL, says Rögle's sports director Chris Abbott

Sjödins improvement has been evident this year. After scoring just a single goal in 22 games last season, he has scored 4 goals and 5 assists in 29 games played this year. The contract will see him remain with the team until 2023. 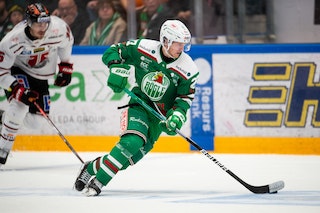 Linköpings GM and former Captain, Niklas Persson, will be remaining with the club for at least one more season. His existing contract had an option for an additional season and the club and Persson have decided to excersize that option.

– When you look at the modern sports organization, continuity is a word that keeps coming back. In today's sports, it is primarily on the management side that it is possible to work with continuity. We are convinced that a continuation with Niklas is the best for us to be able to take the next step to re-establish ourselves as a playoff team in the coming years. I continue to look forward to this journey we are on, says LHC's club director Niclas Björkman

Sebastian Hartmann and Timrå have come to an agreement on an extension. The 27 year old forward joined the team two seasons ago and helped them get promoted back to the SHL.

– It feels fantastic that Sebastian believes in what we do here and wants to continue his career in Timrå IK. He has so far had a good season and I think it sends good signals when players who have come here and received such a good development that Sebastian has had to choose to stay, says TImrå's sports director Kent Norberg

The new contract will see Hartmann remain with the team until at least 2025.