With the past week behind us, we take a look at player and personnel moves within the league. This week features new NHL contracts, HV71 recruits a Canadian and a former SHLer returns to Skellefteå.

A trio of SHL players have signed NHL contracts this week as Calle Själin, Elmer Söderblom and Nils Åman will look to make the next step in their career next season.

Själin is coming off a 22 point season on the blue line with Leksand. The 22 year old defender was selected 145th overall by the New York Rangers in the 2017 NHL entry draft and has signed an entry level deal with the Florida Panthers.

Elmer Söderblom had an impressive season with Frölunda this year, scoring 21 goals and adding 12 assists in a full 52 game season. The 202cm/113kg forward was selected 159th overall in the 2019 NHL entry draft by the Detroit Red Wings and will be starting next season with their AHL affiliate, the Grand Rapid Griffins.

The Vancouver Canucks continue their tradition of signing Swedish talent as they have inked Nils Åman to an entry level contract. Åman also played with the Leksand this past season and will be starting next season with the Abbotsford Canucks in the AHL. 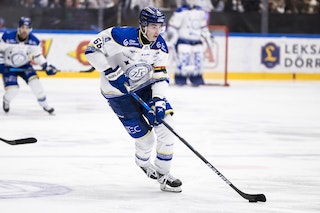 HV71 has added a new piece to their roster for the upcoming season, signing Canadian Sam Vigneault to a one year deal. The 26 year old from Quebec spent his first season in Sweden this past year playing with MoDo in Hockey Allsvenskan where he scored 14 goals and 27 assists in 46 games played. Vigneault has also spent time in the AHL wih the Cleveland Monsters, having played four seasons with the Blue Jackets minor league affiliate.

– In Sam we get a center who is skilled in the offensive game with a good passing game, but who is also strong on the puck and intense in the physical game, says Kent Norberg, sports manager in HV71

The Växjö Lakers have made a new signing this week inking Danish forward Joachim Blichfeld to a two year contract. The 23 year old was a 7th round pick by the San José Sharks in 2016 and has spent the past two seasons with their AHL affiliate. He also appeared in 8 eight games with the Sharks over those two seasons. Blichfeld also spent two seasons as part of the Malmö Redhawks junior program from 2014-2016.

– Joachim is a player with an extremely offensive upside. After quite a few years in North America, he is now coming home to develop his entire game and take it to the next level. It will be fantastic fun to work with Jocke for the next two years, says Växjö's sports manager Henrik Evertsson.

Linus Söderström will be returning to the SHL next year, this time he'll be playing between the pipes with Skellefteå. The 25 year old has spent the past two seasons with Ässät in the Finnish league after an unsuccessful two seasons in North America. Söderström previously played with HV71 where he helped them win the Swedish Championship in 2017.

– A well-trained, calm goalkeeper who makes it look very easy. Relatively experienced despite his age. He's won a Swedish Championship gold, played two World Juniors and played in North America. Did well in Finland and in a team that had a tough time in the league, he has still been an important piece and played a lot. Very calm in the goal and plays very collectively, says Skellefteå's goalkeeping coach Krister Holm. 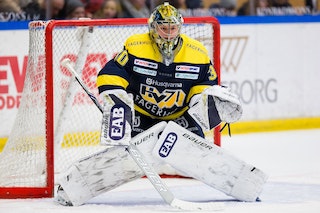 Adam Pettersson has had a long and successful career in the SHL having played 532 games over 13 seasons with Skellefteå and Brynäs. He has won the SHL Championship twice and was a silver medalist five times. He announced this week that he will not be playing in the SHL next season as he has signed with MoDo in Hockey Allsvenskan.

Oliver Bohm has also been a mainstay in the SHL for a long time having 415 games played over 11 seasons in the league and he too will be moving down to HockeyAllsvenskan. He has signed with Västerås.

Joakim Thelin has spent the last three seasons with Oskarshamn but the 29 year old winger announced this week he will be leaving Sweden and has signed with Dukla Trencin in the Slovakian league.