On pace to have his best ever SHL season, Mathias Bromé is excited and hopeful about the second half of the season.

Since being promoted to the SHL for the 2014/15 season, Örebro has struggled to find success. In fact their first season in the big league yielded their best result with a sixth place finish and a quarterfinal loss. Since then they have finished outside the top six twice and missed the playoffs twice, never advancing past the round of eight. However, this year looks like it could be different. Just 17 points back of their point total for all of last season and still 23 games to play, the team is on pace for one of their best SHL seasons. The success, Bromé says, is due to the teams work ethic.

– We have really come together as a group and we know we want to win games and know we will win when we outwork other teams. When we are playing well it's easier to play hard and find success. We work hard every day and every game night. We need to keep that going for the rest of the season. 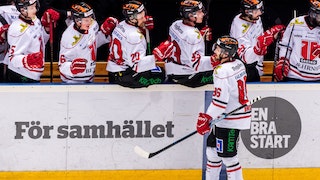 Hardwork and determination aren't the only things that make a successful team, however, you also need chemistry both on and off the ice. That chemistry building for Örebro started before the first puck drop on the season.

– We had a retreat, went away out in the woods and that helped us get close as a team before the season started. We have a tight group of guys, we eat meals together and that helps.

Now in his third season in the SHL, the 25 year old winger is having his best offensive season. With 10 goals and 13 assists in 29 games, he leads all Örebro skaters in assists and points and is tied for most goals. On pace to eclipse last years 35 point season, Bromé credits his overall consistency for his success this season.

– I haven't had to many dips, not many slumps. I think I've played good from game to game, a lot more success in each game. Before I would have a good game, then have three or four not good games. But now I think I've got my game to a higher level. I've also been getting a lot more ice time. When you get to play a lot it helps get you on a roll, helps you get big chances and that makes it easier to play better. 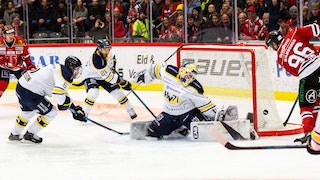 As a young player Bromé came up through the VIK Västerås junior program. He started his professional career in the 2013/14 season with Västerås in Hockey Allsvenskan. Playing two seasons with Västerås before ending up with Mora. In the 2016/17 season, his team leading 49 points helped Mora punch their ticket to the SHL.

– It was a dream come true, getting up to the league with Mora. I loved playing there and Mora is very close to my heart. They gave me the biggest chance to play in the biggest league in Sweden. Just like here we had a great group in Mora, I can see the same kind of success with this team that we had in Mora.

Being a professional athlete of any kind doesn't afford a lot of free time during the season. But when it does come about, the hobbies and interests among players are as varied as any other profession. Some enjoying playing video games, some enjoy being outdoors, some enjoy spending time with their families. However, Bromé uses his spare time building a profession outside of hockey.

– I'm working at the Porsche dealership here in Örebro. They're giving me an opportunity to be a salesman, so I'm there some days during the week, learning and seeing how a normal life is. So that's pretty good for me and I enjoy it 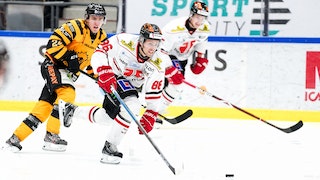 Music Genre: I don't listen to music. I'm the guy who turns the radio off in the car

NHL Team: Don't really follow any teams. But I like to look at Chicago sometimes because my last coach is there.