A pair of wins this week has propelled Rögle to the top of standings with 14 points. Now with five wins in their first six games, they're quickly proving to the league that they are a team to be reckoned with.

Coming in to the week with nine points and sitting 3rd overall behind Djurgården and Oskarshamn, Rögle was hoping to improve their place in the standings and continue their early season success. Their first contest of the week came back on Thursday evening as they visited Örebro.

A tight game until the very end, Örebro looked poised to win it in the 3rd as they managed 13 shots on net and held Rögle to just 2. However, one of those shots from Taylor Matson was able to pull Rögle even about half way through the 3rd and force the extra frame. Overtime did not result in a winner and a shootout was needed.

Léon Bristedt would prove to be the hero in the shootout as the only player to find the back of the net, giving his team the win and an important two points to keep pace with the league leaders. 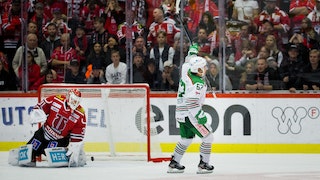 The second game of the week for Rögle came Saturday afternoon as they were looking to put on a good show at home against Leksand.

The visitors were able to carry a 2-1 lead in to the 2nd thanks to a late period tally from their captain Martin Karlsson. However, Rögle would answer with a pair of goals in the 2nd to give themselves a one goal cushion heading in to the final frame of regulation.

Backed by some solid play between the pipes by Roman Will, who faced 13 shots in the final frame, Rögle was looking like they would hold on for the win. Despite the good play from Will, Leksand was able to tie the game with less than seven minutes remaining. Not to be outdone, Rögle answered back just a few minutes later to regain the lead. An empty net goal late in the frame sealed the deal for Rögle as they grabbed their 2nd win of the week and 3rd in a row to propel themselves to the top of the standings.

Our game of the week on the SHL Worldfeed came back on Thursday evening as Djurgården played host to HV71.

The visitors came out hard and fast in the 1st and peppered Niklas Svedberg between the pipes. Not only were they able to put 12 shots on target in the opening frame, they held Djurgården to just 4 shots of their own. Having scored 14 goals in their previous four games, Djurgården was facing a situation they were unfamiliar with this season, a lack of offensive production and a lack of chances. Despite being heavily outshot in the 1st, Svedberg managed to turn aside all 12 shots and kept the game locked at a scoreless tie.

The 2nd proved to be much of the same for Djurgården as their offensive strugles continued. Despite being outshot 8-3 in the frame Djurgården was able to break the deadlock. Anton Hedman was able to get a piece of the point shot from Olle Alsing and redirected it past Hugo Alnefelt on the man advantage to give Djurgården the 1-0 lead. Svedberg continued to impress between the pipes and held the narrow lead intact heading in to the final frame of regulation. 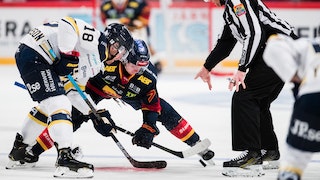 The 3rd period was much of the same from HV71, lots of shots. Outshooting the home team 12-3 in the final frame HV71 was finally rewarded with just over five minutes remaining. Linus Sandins wrister from the line took a slight defelction off Robin Norell outfront and found its way past Svedberg to tie the game and send it to overtime locked at 1.

The table turned in the overtime frame as it was Djurgården heavily outshooting their opponent for the first time. The best chance of the evening came late in OT as Tom Wandell looked poised to win in tight, but a stunning paddle save from the young Hugo Alnefelt kept the game alive and forced it to a shootout, which proved to be just as close as the rest of the game.

The second shooter for HV71 would open the scoring in the shootout as Linus Fröberg was able to send it past Svedberg. With the game on the line and needing to score, Alexander Hotz was called upon as Djurgårdens third shooter. Making no mistake, a perfectly placed wrist shot rippled the mesh and forced the shotout to continue. The teams traded attempts back and forth, but it was Patrik Berglund as the seventh shooter for Djurgården who would finally break the deadlock and give Djurgården the two point win.

3 Stars of the Game:

This weeks top climber was defending champions Frölunda. Putting together impressive back to back victories that saw them outscore their opponents 11-3 they proppelled themselves from 6th spot at the start of the week in to the 2nd overall position in the standings.

After finishing last week at the top of the league, a pair of losses for newly added Oskarshamn has dropped them out of the top six and in to 7th overall. A great example of just how quickly things can change in this league in such a short amount of time.

The Växjö Lakers struggles continue as a hard fought loss against Linköping on Saturday evening has dropped them back in to bottom spot in the standings.