Covid-19 continue to wreak havoc to the SHL schedule as it finds its way through teams. This past week, we saw a lot of games being postponed but we still had some action on the ice. Here's what happened.

Out of the teams playing more than one game, Djurgården were the only ones to win all of their games (two). On Tuesday, they steamrolled across Brynäs, winning 4-1 thanks to two goals from Linus Andersson, 21, and two from Niclas Bergfors. Worth noting is that Djurgården went from 0-0 to 3-0 in a span of 58 seconds in the last minute of the first period in that game.

On Saturday, their young guns - Alexander Holtz and William Eklund - led the way to a heavy three pointer in Gothenburg as Djurgården won 3-2. Holtz scored twice and Eklund had a goal and an assist to his name, marking the first away win for Djurgården this season.

HV71, the only team to play three games, started the week off in great fashion by beating Luleå 5-1 Tuesday. On Thursday they managed to snatch a point against a Linköping side that had the three points in the bag with about a minute to go, but a missed chance with the open ned gave Oskar Olausson the opportunity on the other side and he bagged the equaliser. Linköping managed to come out on top thanks to a shootout win. HV71 then lost to Skellefteå on Saturday (3-2), with Olausson scoring again, making it his third goal in as many games during the week.

Oscar Möller scored the game winner for Skellefteå in that game, and maybe he has found his stride again. After a quiet start to the season, Möller now has two goals and two assist in three games. By comparison, he has two goals and five assist on the season.

Both Malmö and Brynäs lost the two games they took part in. On Thursday, Malmö got shut out by a stunning performance from 39 year-old Viktor Fasth as Växjö extended their win streak at home to a solid six games, with five of the wins coming in regulation. Malmö then travelled to Leksand Saturday, where they were up 2-0 after the first period but saw that lead vanish and ended up without points, losing 4-3. Brynäs lost 4-1 to Djurgården Tuesday before losing 6-4 to Färjestad Saturday in an action packed game that had pretty much everything. Färjestads Jacob Peterson scored for the first time since September 24th and he did so in a nice fashion, as he found the net twice in 31 seconds in the second period.

That brings us to the players of the week. The aforementioned Fasth was the only goalie to post a shutout in the week, thereby becoming the eleventh goalie to do so in the season. Niklas Rubin of Frölunda is still the only goalie to have multiple shutouts to his name (3).

When Greg Scott scored against Färjestad on Saturday, he notched his 73rd goal in the SHL, which put him tied with Greg Parks for fifth among Canadian goalscorers of all time in the league. In the same game, Anton Rödin had an assist, making it his 200th point of his SHL career. 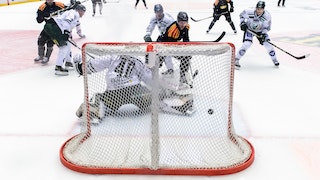 Oskar Olausson and teammate Fredrik Forsberg tied for first in goals in the week with three goals each. Only one player, Nicklas Danielsson of Brynäs, had more points. Danielsson notched four points in the week, two goals and two assist.