With the past week behind us, we take a look at player and personnel moves within the league. This weeks highlights include Skellefteå extending two key players and Brynäs recruiting an NHL veteran.

It was annouced this week that Hampus Plato has been loaned to Västervik in HockeyAllsvenskan for the upcoming season. The 20 year old defender played in 34 games with Oskarshamn last season, scoring two goals and adding two assists.

– We saw what Hampus did last season when we tested him in the SHL. He didn't disappoint us and he grew into the responsibility and the role he was given. We hope that this loan to Västervik will allow him to continue his development and get the ice time he needs, says sporting director Thomas Fröberg.

The loan extends for the entirety of the season, however Oskarshamn can recall him if the need should arise.

Brynäs added a big piece to their lineup this week as they have signed former Brynäs forward and longtime NHLer Johan Larsson. Larsson last played for Brynäs during the 2011/12 season and was also a product of their junior program. He has spent the last ten years in North America playing in a total of 488 NHL games with Minnesota, Buffalo, Arizona and Washington.

– In addition to being a very competent hockey player, he is also a strong informal leader. Johan is coming off a good NHL season and of course it feels incredibly good and we are very proud to have him home again, says Brynäs sporting director Johan Alcén to the club's website.

Before leaving for North America, Larsson had a stellar season in 2011/12 scoring the most goals, assists and points by a junior, winning rookie of the year, winning the championship with Brynäs as well as the WJC Gold Medal.

– It feels super fun. It will be fun to go out on the ice with the boys again. I feel charged. It feels like we have a very good team going here so it will be incredibly fun, says Joakim Lindström to the club's website.

His time with Skellefteå has seen him win a slew of accolades including 3 SHL MVP's, Two Swedish Championships and he is currently second all time in points for Skellefteå. The new contract is for the upcoming season. 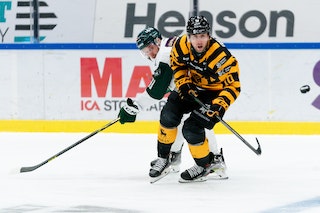 Skellefteå also locked up Oscar Möller this week to a new two year deal. Möller has also been a longtime Skellefteå player who will be going into his tenth season with the club and fourth as their captain. Möller has a total of 159 goals and 142 assists (301 points) in 397 games played with Skellefteå.

– Oscar has been one of the league's absolute best players for the past ten years and we are very happy to have inked him for another two years. He leads the team in an excellent way both on and off the ice. He is a caring person who cares for both the team and the club, says Skellefteå's GM Erik Forssell