With the past week behind us, we take a look at player and personnel moves within the league. This weeks highlights include a veteran goaltender announcing his retirement and Frölunda recruits from the NHL

Frölunda have made an acquisition to bolster their blue line this week recruiting Petteri Lindbohm from the Florida Panthers. Lindbohm started the season in the KHL with Jokerit but finished in Florida. He has also played with St. Louis and their AHL affiliate as well as spending three seasons in Switzerland. He also represented Finland in this years Olympics, winning a gold medal with the team.

– I have heard a lot of positive things about Frölunda and it is one of the best clubs in Europe. I have wanted to play in Sweden for a long time and when I got the chance I didn't hesitate. Frölunda is a good place to be and it's an opportunity for me to develop, says Lindbohm.

Linköping fans can breath easier this week knowing the team has resigned star forward and fan favourite Broc Little. The 34 year olds future was uncertain at the end of last season after his contract had expired, but the American has now inked a new three year deal with the team. Little will be entering his eigth season with Linköping and will be looking to add to his goal total. Little is currently the all-time goal scorer in SHL history among North American born players with 151 goals.

– I am very happy to continue my journey in Linköping and to bring playoff hockey back to Saab arena, says Little.

Unfortunately for fans of LHC they will have a short wait to see Little back on the ice. Due to Swedish tax laws the American forward will not be able to rejoin the team until October. 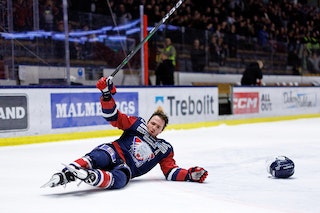 Although it comes as no surprise, Oscar Alsenfelt announced this week that he has decided to hang up his skates. The 35 year old goaltender was widely considered one of the best goaltenders in the league during the peak of his career. During the 2016/17 season he posted a .945 SV%, a 1.62 GAA and posted 9 shutouts in 33 games played. He also won the Honken Trophy that season and was named SHL goaltender of the year in the SHL Awards. Alsenfelt played a total of 327 games in the SHL, registered 26 shutouts and finished with a perfectly even record of 156 wins and 156 losses. However this is not the end of hockey for Alsenfelt as it was announced this week that he will be the new League Commissioner for the SDHL.

– Women's hockey in Sweden is about as old as I am, and we are both on a growth curve where we will be able to benefit from each other. I am very much looking forward to becoming part of the SDHL and helping to take the league to the next step, says Alsenfelt.