Another week of hockey is in the bag as the SHL rolls on towards the playoffs. And while some teams are struggling, others seem to have found their game.

Skellefteå added two more wins to their ongoing streak, which currently sits at eleven straight wins stretching back to January 23rd when they last lost. This past week, Skellefteå beat Djurgården and Oskarshamn, both by a 4-1 margin making it their third straight win by those numbers. Team captain Oscar Möller is in the midst of a hot streak having scored six goal and added one assist in his past five games. 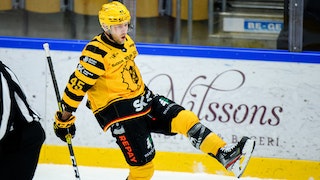 No team won more than two games but seven teams did so: HV71, Växjö, Färjestad, Luleå, Leksand and Malmö. Apart from Skellefteå, HV71 was the only other team going through the week unbeaten. On Thursday they won the no holes barred gunslinging affair against Rögle when they came away with a 7-6 overtime win thanks to a Fredrik Forsberg winner. Last Monday, HV71 signed three new players to their roster in forwards Miska Siikonen (JYP Jyväskylä), Jordan Murray (Dinamo Riga) and Arttu Ilomäki (Luleå). The signings paid dividends during the week with Siikonen having a goal and an assist and Ilomäki scoring twice over the last week.

In the bottom of the league table, Malmö, Linköping, Brynäs, Oskarshamn and HV71 are all two points apart. With HV71 winning their games, they currently sit in 10th place with 43 points in 39 games, same as Oskarshamn in eleventh. Linköping also has 43 points, in 40 games, and are twelfth. Underneath the dreaded relegation line of the table, in 13th and 14th place, are Malmö and Brynäs - both having 41 points to their names so far. Brynäs has four games in hand to Linköping - Malmö has five.

After a few sub-par performances, Janne Juvonen of Leksand returned to greatness in the game against Frölunda on Saturday. Juvonen stopped 44 out of 46 shots in their 3-2 win at home to Frölunda. With that, we turn to the player side of things for a while.

Current scoring leader Emil Pettersson continued his fine form of play by scoring four goals in three games. Pettersson went without a point in the 2-1 shootout win aganinst Linköping, thus breaking his point streak, but he still has seven goals and two assist in his last eight games. No other player had more goals in the past week and with those four goals, Pettersson came in first in terms of points as well.

Another eight players had four points to their names but with the tie-breaker being goals scored, Pettersson topped the table. Juhani Tyrväinen (Luleå) Ludvig Rensfelt (Örebro) and Daniel Zaar (Rögle) had two goals and two assists each. Matt Donovan, Fredrik Forsberg (both with HV71) and Linus Klasen (Luleå) had a goal and three assists. Alexander Bergström and Linus Fröberg (both with HV71) had four assists each. 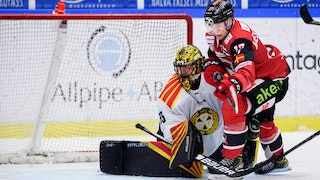 Samuel Ersson with the only shutout of the week. Photo Credits: Christian Örnberg (Bildbyrån)

Getting back to the teams of last week, the Djurgården woes continue: The Stockholm side went without a point this past week and are winless in their past eight games, having just scraped together two points in the process. They sit in ninth place with 50 points, having a seven point cushion to HV71 in 10th.

This coming week only has three games to the schedule in total. HV71 face Brynäs tonight in what is a battle for some very important points in the bottom of the league. The same can be said of the aforementioned Djurgården facing the Malmö Redhawks Tuesday. And then on Thursday, Malmö face off against Brynäs. All these games are previously postponed games having been moved due to covid outbreaks. The next time we see a multi game hockey night is on February 16th.

In Sweden, all games can be seen on the C More platform (TV and streaming). Any international fans can turn to the following platforms for a dose of SHL action.