William Eklund has seen quite a lot already. Keeping in mind that his 20th birthday is a few months away, there's a lot of things waiting for the youngster. SHL.se called him up to see how life is treating him.

After changing coaches in the offseason, the relationship between Djurgården and coach Barry Smith lasted a little under two months into the season. Shortly after that, it was announced that William Eklund was to return on loan from the San Jose Sharks. Despite the coaching change, Djurgården are stilll in the bottom of the league. Although, after more than two weeks without playing games, Djurgården went back into action last week and have now notched two straight wins.

"These are uncertain times for everyone. We have been trying to recharge as good as we can. We've had some guys coming in and out of covid" Eklund says.

Looking at the league table, Djurgården find themselves in the bottom but with the two wins, things are looking a bit better heading down the stretch, as the Stockholm based team is looking to make the most of the spring in an effort to try to avoid the relegation battle. For Eklund, this is something new, but he takes it in stride.

"Although nobody wants to be in a situation like this, I think it can be useful to go through during the early stages of my career. I guess nobody thought the season would turn out like this, but here we are. We have to find some light at the end of the tunnel and work our way out of this. And we've been playing really well lately. All that matters is to look ahead." he explains very matter-of-factly.

As he came up to the first team, he admits he was looking up to and trying to emulate then-captain Jacob Josefson.

Who did you kind of hang out with on the team?

"I hung out a lot with the younger players, I think it's rather natural. I hung out with Alexander Holtz for instance" he says.

William Eklund made his SHL debut on January 4th, 2020, aged 17. That spring he played 20 games, notching four assists. Last season, Eklund scored eleven goals and had twelve assists in 40 games, earning him the Rookie of The Year Award at the end of the season, before he was drafted 7th overall in the NHL Entry Draft by the San Jose Sharks in the summer. 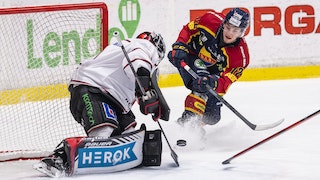 He is now back with Djurgården for this season, on loan from the Sharks. And although he's still just 19 years old, he's seen the League inside out already.

How would you describe the SHL as a league?

"The hockey is very structured. The teams play structured and their systems to a tee and it is often a battle of nutrition in the end. It differs from the NHL, where there's more of a run and gun style of hockey."

Speaking of the NHL, the rink size is different. Honestly now, which one do you prefer?

"I like them both, I really do. The game is different on the smaller rink, and something I like."

As Eklund is on loan from the Sharks during the season, chances are he is to return to the NHL for the 2022-23 campaign. That begs the question.

What are you focused on working on this season?

"I'm trying to do everything a little bit quicker. I need to think faster, every game has do be played a bit faster. I need to make faster decisions. Stuff like that." 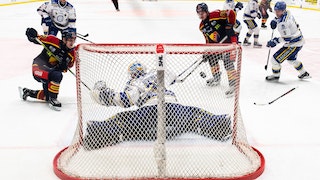 With his father, Christian, having played 429 SHL games with Djurgården, the organization is in the DNA of William Eklund, quite literally. But coming into the first team, there weren't much about William being the son of Christian.

"No, we're two very different players. He did his thing and he did it well" young Eklund says, acknowledging the grittier, agitating side of his father. "All I try to do is to play my game".

The young William Eklund first stood on skates - in Germany. When his dad played pro in the DEL (with the Augsburger Panther), William and his mother Mia, a former figure skater, found their way to a local pond. And since then, William Eklund has never looked back. In previous talks with the young forward,, Eklund has told yours truly that he's trying to turn at speed and using a low center of gravity to gain an advantage in tight spots. That's exactly what he's been doing this season, spinning away from opponents like they were lamp posts.

"That's something I try to work on all the time. There are details one can work on during the summers and pre-season. Like the individual strides, how and where to put the skates. Of course, that's something I work on."

Today, figure skating coaches are frequently involved in the skating development with hockey players. Is mother Mia still giving tips to his son?

"Haha, yeah, maybe from time to time" he laughs. "But I'm working with a lot of people when it comes to my skating."

Most 19 year-olds playing in the SHL dream about the NHL. William Eklund is well on his way. And during his stint in California at the start of the season, he picked up quite a few things. Chief amongst which might be how to conserve his energy. Because, not unlike his father, once the puck is at the stick of an opponent, William Eklund is like a dog on a bone trying to get it back. But compared to previous seasons, there is a difference. He's not going blindly in to every situation, trying to win the puck back. He is a bit more patient.

Is this something you think about during games or has this to do with maturity?

"I'm trying to think about it. At the same time, I look at the players in the NHL, what they're doing and how they do stuff. We talked a lot about these sort of things over there; Not to go into every situation trying to win the small percentage battles. Instead I try to focus on the details that might help me win the puck, maybe at a later stage."

So far, it's going quite well. William Eklund is back with Djurgården. For now.