With two shutouts in his three games this week and just one goal given up over that span, Oscar Alsenfelt has been the backbone for Malmös recent success.

After a five game losing streak had them at risk of falling out of the top ten, Malmö has certainly turned things around heading in to the holidays. With three straight wins and a 1-0 shoutout loss to Linköping before that, the Redhawks success has been due in no small part to the play of Oscar Alsenfelt between the pipes.

The week started off with a tough contender as Malmö visited Kinnarps arena to take on HV71. Both teams exchanged chances in both the first and the second, but despite a total of 39 combined shots in the first 40 minutes, neither team was able to ripple the mesh and the game would head to the third locked at a scoreless tie. The game would finally break wide open in the third as Malmö opened the scoring in the first minute of the frame. HV71 answered back, however that is all the offense the home team would muster as The Redhawks found the back of the net three more times before the final buzzer and came away with their first win since November 21st.

Game two of the week came back on Thursday evening as Malmö was looking to build off their success from Tuesday nights victory. The game would provide us with one of the best goaltending performances of the season as Oscar Alsenfelt was in world class shape, turning aside all 44 shots he faced. The Redhawks offence was also rolling on Thursday evening as they rippled the mesh 4 times on their way to the three point victory on home ice. It was the just the second time all season and first time since September 28th/October 3rd that the Redhawks put up four or more goals in back to back games.

Their third and final contest of the week would be the sole game on Saturday, and the final one before the holiday break as they once again faced off against HV71. This game would prove to be another fantastic performance for Alsenfelt as he turned aside, once again, all shots faced. A total of 31 saves were made on his way to his second straight shutout victory. It was a necessary performance from Alsenfelt as well as the games only goal came halfway through the third period and Malmö held on for the 1-0 victory. With the win, Malmö strung together three straight victories for the first time all season. 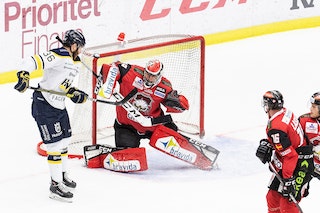 Our game of the week this week came back on Thursday evening as Leksand played host to Färjestad in just their second matchup of the season.

Färjestad would open the scoring with a pair of goals about three and a half minutes apart. The first was a perfectly placed wrist shot from Michael Lindqvist on a partial 2 on 1 that beat Axel Brage far side. The second was a great individual effort from Johan Ryno who's centering pass came back to him behind the net and he was able to complete the wrap around for the 2-0 lead just shy of the halfway point of the period. Despite their league worst powerplay, Leksands first opportunity on the man adavantage was finished off by a beatiful cross ice feed from Marek Hrivik and sent home by Linus Persson to pull the game back within one heading in to the second frame.

The first 10 minutes of the second frame wouldn't result in a score change but the goals came in quick succession in the scond half. Färjestad was able to regain the two goal lead just after the halfway mark of the period as Sebastian Erixons shot took an odd deflection off the jersey of Gustav Rydahl and found the back of the net. Exactly 45 seconds later, Lucas Norsäter responded with a hard low shot along the ice that found it's way five hole against Markus Svensson and pulled the game back within one. Michael Lindqvist followed that up less than three minutes later on the man advantage with another wrister far side to restore the two goal lead. Leksand refused to give up, however, and responded with just 22 seconds remaining in the frame after a beautiful cross ice feed from Oskar Lang found Sebastian Wännström to pull the game back within one once again. The second frame finished 4-3 in favour of Färjestad.

The third period was all Leksand as they came out hard and fast, hungry for the game tying goal. A total of nineteen shots on net were tallied by the home team with just three for Färjestad. Unfortunately for Leksand, Markus Svensson turned aside all the shots he faced and Färjestad managed to hold on for the 4-3 victory.

With their win on Thursday, coupled with a Luleå loss, Färjestad now sit alone at the top of the standings with 52 points. Frölunda remains in the hunt for top spot, sitting in third with 50 points. Örebro, HV71 and Rögle sit 4th, 5th and 6th respectively. Not far behind, however, is Skellefteå with 40 points, Malmö with 39 and Djurgården with 38. The Växjö Lakers round out the top ten with 34 points. Brynäs sits just one point back of the Lakers in 11th and Linköping clings to 12th with 26 points. Leksand and Oskarshamn sit 13th and 14th with 23 and 22 points.