With the first full week of the season in the bag, the leaderboard is not looking like a lot of fans might have expected. Both newly promoted teams have had a great starts to the season, including Oskarshamn who has now won 3 games in a row and sits at the top of the standings.

Having surprised a lot of fans by being promoted last season for their first taste of SHL action, Oskarshamn has quickly proven that they are not a team to be underestimated. After starting their season with a high scoring 5-4 OT loss to Skellefteå, they grabbed all 9 points in this weeks action. After kicking off the week with a 4-1 victory over the other newly promoted Leksand, they followed that up with a hard fought 1-0 shutout victory against Rögle that saw Tex Williamsson turn aside all 40 shots he faced. However, the real test of the week came Saturday evening as they hosted undefeated Djurgården.

Despite being heavily outshot through the first two frames, Oskarshamn carried a 1-0 lead in to the 3rd period. Adding an additional two goals in the 3rd frame proved enough for Oskarshamn. Despite two quick goals late in the frame from Djurgården, Oskarshamn was able to hold on and come away with the 3-2 victory. Newly acquired Tyler Kelleher continued to impress in his first SHL season, he lead the team with two goals and Tex Williamsson between the pipes turned aside 29 of the 31 shots he faced. The combined effort form the newest SHL team lead to Djurgårdens first loss of the season. And their performance on the week was enough to boost them to the top of the standings as the first team to hit double digit points on the season.

This weeks world feed game of the week came all the way back on Tuesday night as The Växjö Lakers played host to Djurgården. The first period was a wild one as both teams showed their offensive prowess with three goals apiece.

The newly acquired Mathew Bodie opened the scoring with the first of his SHL career after his point shot found its way top corner and opened the scoring with less than five minutes elapsed in the first frame. It wouldn't take long for Djurgården to answer back as Michael Haga got some puck luck in front of the net and was able to send it home. The rest of the period continued in similar fashion as the teams continued going goal for goal. Thanks to a late period powerplay goal form Djurgårdens Captain Jacob Josefson, the game headed to the 2nd all tied at three. 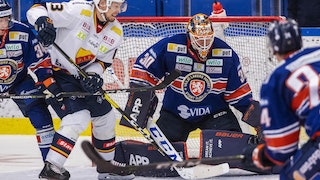 The 2nd period looked as if the high scoring trend would continue. The young prospect and potential top Swedish pick in this years draft, Alexander Holtz, was able to give his team the lead after a turnover in the Lakers end. Walking off the end boards he was able to score the wrap around for his second of the game to give Djurgården the 4-3 lead with just over three minutes elapsed in the frame. Just a few minutes later Niclas Bergfors increased the lead on the man advantage with a shot that beat Viktor Fasth short side and ended his night early as Viktor Andren came in to replace him.

The 3rd frame saw the Lakers come out hard and fast in an attempt to get back to even with Djurgården. They absolutely peppered Niklas Svedberg between the pipes with 17 shots on target and allowed just 5 shots on their own net. Despite their deperate attempts to ripple the mesh, Svedberg stood tall and Djurgården was able to hold on for the 5-3 victory.

Three Stars of the game:

Check out the game highlights:

After the first week of the regular season in the bag, the standings, as previously mentioned, might not look like some fans were expecting. Both newly promoted teams are in the top five, the defending Champs Frölunda have dropped their first two games of the season and a couple of other teams have had surprisingly dissapointing starts. The only team without a win or a point are the Växjö Lakers, who have dropped their first 4 games of the season. However, it is only 4 games in to a long 52 game season, and anything can happen between now and then.

Check out this weeks top saves and goals