Coming in to the week, Luleå had lost three of their last four games and were looking to end the year on a high note. On the other side of the ice their opponent, Färjestad, was riding high on a four game win streak and were hoping to make it five in a row.

The first two periods of thursday nights game were fairly evenly matched on the shot clock, however it was Luleå capitalizing on their chances. Jonas Berglund was the first to find the back of the net as he opened the scoring in the first period. Pontus Andreasson would then increase the lead with a pair of goals in the second frame, one early in the period and one near the end. But it wasn't until the third period when Luleå would relly break the game wide open.

Despite the fact that Luleå was actually outshot 10-6 in the third period, they were the ones to find the back of the net... a lot. With just six shots on target, they managed to score a whopping five goals in the frame. Färjestad did not manage to score a single goal and Luleå would come away with the massive 8-0 win.

With a ton of momentum from their tuesday night win, Luleå headed in to their thursday night matchup against Leksand with a lot of confidence. This game was also important in relation to the standings. Coming in to the game, Leksand trailed Luleå by just four points, so a three point win would put them on the heels of the leagues northern most team.

Just like their tuesday night matchup, this game was fairly evenly matched on the shot clock but, once again, it was Luleå who capitalized on their chances. Linus Omark opened the scoring in the first frame then Brendan Shinnimin and Isac Brännström scored in the second frame as Luleå would carry the 3-0 lead into the final period.

Leksand showed life early in the third period as Mikael Ruohomaa was able to find the back of the net with just 61 seconds elapsed in the period. Unfortunately for Leksand, that is all the offence they would find as Linus Omark would restore the three goal lead late in the frame and Luleå would cruise to the 4-1 victory.

With the pair of big wins this week, Luleå now sits third overall with 54 points. 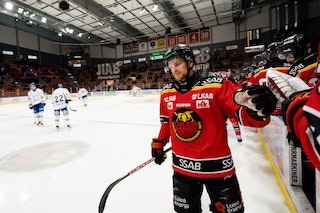 – Of course it feels very good to have Dick back in the team. He is a person who has the ability to contribute positively in a group and on the ice we all know what qualities he possesses. In addition, Dick has a long background here and it is also an important parameter, as he has a big heart for Djurgården, says Djurgården's sports manager K-G Stoppel

Axelsson has a total of 434 SHL games in his career in which he wracked up 297 points.

Patrik Lundh is returning to Sweden as the 33 year old has signed with Färjestad. Lundh started the season in Germany with the Schwenninger Wild Wings.

– We think it is a great opportunity for us and Peppe to come home to Karlstad and get a restart after six months in Germany. We feel that we need some competition on the forward side and also broaden the center side, both to become less vulnerable to damage and that we have centers that are currently in the Olympics. We also think a little more competition can make us get the best out of our material, says Färjestad's sports director Rickard Wallin

Brynäs has filled a hole in their goaltending roster with Latvian goaltender Kristers Gudlevski. The 29 year old spent last season in the Slovakian league, but he has NHL, AHL, KHL and DEL experience during his career.

– Kristers is very qualified and at a good age where he has accumulated a lot of international experience from the NHL, KHL and the Olympics, but still without feeling "ready" in any way. He is very motivated to come here and get a fresh start in his career and show his full potential, says Brynäs sports manager Johan Alcén.