The 2021/22 SHL season is now underway! All 14 teams were in action on Saturday afternoon and evening for the first game day of the new season.

The newest Team to the SHL faced off against a team that has struggled the past couple of seasons as Timrå visited Oskarshamn for the first game of the season. It was Timrås first SHL game since they were relegated back in 2019. They remained, however, one of the top teams in HockeyAllsvenskan over the past two season and had it not been for the pandemic, might have missed just one season in Swedens top league.

Timrå got off to an absolute dream start as they came out firing on all cylinders and managed to score a pair of goals in the first two minutes and thirty seconds. However, the rest of the period was all Oskarshamn as they absolutely peppered Jacob Johansson between the pipes with 17 shots on target, two of which found the back of the net to tie the game. Tomas Zohorna and Patrik Karlkvist, who scored the first two goals for Oskarshamn also scored in the early stages of the second to give Oskarshamn the two goal lead.

Despite being heavily outshot, Timrå fought hard until the final buzzer sounded but found themselves falling just short as Oskarshamn came away with the 5-4 victory. Final shots on target were 34-23 for Oskarshamn.

The heavyweight matchup of the day saw the defending champs hosting Färjestad in what proved to be a very exciting game.

The Lakers took the early advantage in the first frame as they managed to score a pair of goals to take the 2-0 lead heading into the second period. One of the big stories of this game was also the incredible shot total for the Lakers, which started out with 15 shots on net in the first frame. They would follow that up with 17 shots in the second frame, however Färjestad would keep pace with them, registering 13 of their own in the middle period. One of those 13 shots found the back of the net courtesy Victor Ejdsell, cutting the lead in half heading into the final frame of regulation.

The third period turned out to be the most entertaining of the game as Färjestad would score a pair of goals to take the lead, the second of which came with just over three minutes remaining. However the Lakers had an answer as Hugo Gustafsson, in his SHL debut, would tie the game with just 1:39 remaining in the third to force extra time. Overtime would solve nothing and so a shootout would be needed. Färjestad would complete the comeback with Victor Ejdsell getting the game winning goal in the shootout.

Despite losing, the Lakers managed a whopping 44 shots on net, only one of which came in the overtime frame.

The final afternoon game of the day resulted in what many fans would probably think was a surprising result. Frölunda hosted Brynäs who, of course, managed to avoid relegation last season by defeating HV71 in the relegation series. This game was also important for Frölunda as they welcomed back one of the most popular players in franchise history, Ryan Lasch.

Frölunda looked solid in the first period, coming away with a 2-0 lead about halfway through the frame. However, that is all the offence the Indians would find in the game as Veini Vehviläinen, in his SHL debut, would turn aside all other shots he faced.

A goal late in the first frame got Brynäs back within one. They would follow that up with three more in the second to take the 4-2 lead. That proved to be enough as netiher team was able to ripple the mesh in the third period and Brynäs completed the come from behind upset. Ryan Lasch registered an assist in his first game back and Veini Vehviläinen turned aside 23 of 25 shots faced, including 9 in the final frame to keep the lead intact. 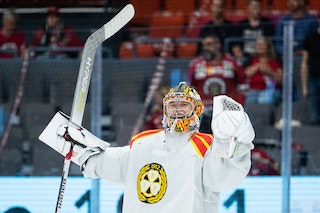 The evening games kicked of at 6PM Swedish time with four games to watch. The SHL's northern most team hosted Linköping for the first game of the season.

The game was fairly back and forth for the first two periods as the teams went tit for tat. Luleå would score and Linköping would answer not long after. The game tying goal for Linköping in the second frame, in fact, came just 61 seconds after Luleå regained the lead. The third period, however, was all Luleå.

Despite staying with them through the first 40 minutes, Linköping couldn't keep it up in the final frame. Juhani Tyrväinen, Carl Mattsson and Konstantin Komarek would all ripple the mesh for Luleå in the final period of the game, giving Luleå the 5-2 victory in the season opener. Komarek had an outstanding performace for Luleå scoring a pair of goals and adding a pair of assists.

This win also marked a mileston for Luleå as it was their tenth straight season opener win.

One of the closest games of the day was the contest between the Malmö Redhawks and Leksand. The first period was a wild 20 minutes as both teams came out firing and both registered 12 shots on net and a pair of goals. Neither team really had the advantage in the first frame as they exchanged goals and would head into the second with the game tied a 2 goals apiece.

The second frame calmed down a bit as neither team was able to ripple the mesh until the later stages of the frame. With just over four minutes remaining in the period Pathrik Westerholm would tally his second of the game to give Malmö the lead heading in to the final period.

Carter Ashton would find the game tying goal for Leksand in the early parts of the the thrid but, unfortunately for Leksand, if was not enough. Adam Ollas Mattsson rippled the mesh later in the frame in what turned out to be the game winner as Malmö captured their first win of the season 4-3.

This game featured teams who both had new head coaches. Robert Ohlsson was visiting his former team and Djurgårdens new head coach, Barry Smith, was back behind a Swedish bench for the home and season opener against Skellefteå. With all of their off season acquisitions, Skellefteå has a very dangerous team on paper and are hoping that translates to a dangerous team on the ice.

This game was all Skellefteå right from the get go as they impressed in front of the crowd in Stockholm. In a span of less than three minutes in the first frame they managed to score a trio of goals to jump out to the 3-0 lead. Djurgården would answer back with a goal before the end of the frame however. It didn't take long, though, for Skellefteå to regain the three goal lead in the second, which was once again matched by a tally from Djurgården. Unfortunately for the team from Stockholm, that was all the offence they would manage in the game.

One final goal in the third from Skellefteå was the nail in the coffin and they came away with the 5-2 victory.

The seventh and final matchup of the day was a great game between two teams that were both coming off their best SHL seasons. Örebro was eliminated in the semi finals last season and Rögle finished second after losing in the finals.

Last years finalists came out hard in the first frame as they were able to jump out to a 2-0 lead before the halfway point of the period. However, a blast from Kristian Näkyvä would bring Örebro back within one before the en of the frame. The second period would yield just one goal, which was a beautfiul passing play by Rögle, finished off by Ted Brithén after a great cross ice feed from Adam Tambellini.

Just like the second, the third would see just one goal as Näkyvä would register his second of the game to bring Örbero back within one. Despit a solid late game push to tie it up, Rögle was able to hold on for the win. 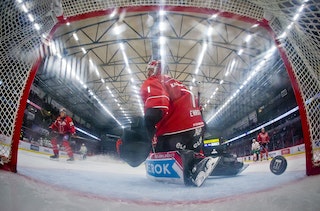