With the addition of the Abbott Brothers about halfway through last season and the addition of some very valuable players, Rögle was able to make the post season for the first time since the 90's and for just the 2nd time in club history. Sneaking in to the playoffs with a ninth place finish, they were swept in the first round by HV71. Although it wasn't the playoff result they were hoping for, the season as a whole was certainly a success.

Jump to this season and they are now one of the top teams in the league. Although they have had some recents struggles, four losses in their last five games, the season as a whole has been very successful thus far. That success, Nils says, is due in no small part to the chemistry and depth the team has

– I just say we have a great team this year. Great players, lots that can score and I just think we're playing well. Of course our depth helps, we have four lines that can score. Not just one line that we rely on, everyone can put up points. We also have good defence and great chemistry. So that all helps. 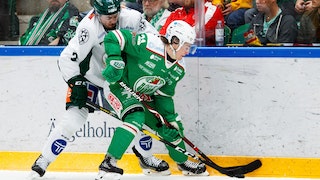 Not only are they a deep team when it comes to their roster, they are also one of the more diverse teams in the league. With the Abbot Twins and Cory Murphy, they have the only Canadian coaches and GM in the league. They also have three Canadians, one American, a Czech goaltender, a Norwegian a German and a Dane on their roster. Nils says this diversity gives the team a bit of unique edge.

Having spent his entire career here in Sweden, Höglander has grown up playing on the European size rink. However, he thinks the North American size is more suited to his abilities.

A perfect example of his quick style of play and soft hands came back on October 29th against Djurgården when he successfully pulled off what's known here in Sweden as a "Zoro" goal. In North America it's commonly reffered to as a Lacrosse style goal, or simply "The Michigan" named after Mike Legg, who successfully pulled off the goal for the first time in 1996 while playing for the University of Michigan. Since then, countless players have attempted to score that way, but very few have pulled it off. Höglander has done it two seasons in a row now. However, his goal back on the 29th was arguably the nicest and smoothest looking "Zoro" goal ever scored. Höglander says his fascination with that style of goal came about when he was younger and playing floorball.

– Of course it's something I try in practice, but I think more it came from when I was young. Trying it with a floorball stick and having fun with it while just playing with friends. So when the opportunity came in the game I just went for it and it worked. 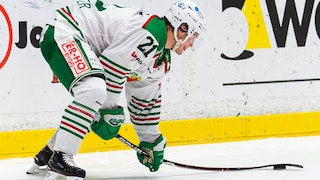 At just 18 years old, Höglander still has a lot of hockey ahead of him and a bright future in the game. Projected to go late in the first round of the NHL draft last summer, he fell to the 40th overall pick for the Vancouver Canucks. A pick that excited many Vancouver fans, especially after the success of their current young Swedish super star Elias Pettersson. Vancouver has a history of Swedish players, including Markus Naslud and the Sedin Twins and Höglander is excited at the prospect of potentially being the next young Swede to wear the Orca.

– I was really happy to be picked by Vancouver of course. With Pettersson over there and lots of good players, it's hard to make the team. But I will do my best to make it, but we'll see what happens next season. But I really like the city and the team.

Movie: Don't have much time for movies, so I'm not to sure