After winning their first game of the season for the tenth straight year, Luleås success took a turn for the worst. Coming into the week this week, the leagues most northern team was looking to put an end to a 4 game losing streak in which they were outscored 13-6.

Their first matchup of the week came against a Malmö team that had won 4 of their first six games and were playing with a lot of confidence. This game turned out to be a tight contest that came right down to the wire. Despite being heavily outshot (10-4) in the first frame, Jesper Wallstedt stood tall between the pipes for Luleå and kept the scoreless tie intact through the first frame.

The second period was a bit more evenly matched as Luleå applied more offensive pressure and both teams exchanged chances. However, it was Luleå who was finally able to break the deadlock as Julius Honka was able to ripple the mesh just as a penalty expired to give Luleå the 1-0 lead. That would be all the offence the second frame would yield as both goaltenders continued to play well.

The third period looked as if the games only goal would be enough for Luleå to come away with the win. However, with just over six and half minutes remaining, Malmö was finally able to beat Wallstedt as a hard wrister from Joakim Ryan found the back of the net on a 5 on 3 man advantage, tying the game at one goal a piece. With time winding down, the game looked as if it was headed for overtime, but Luleå had different plans. With just 42 seconds left, Juhani Tyrväinen collected the rebound and sent it home to secure the win, the three point victory and snapping the four game losing streak.

Luleås second game of the week also came against a tough opponent. Not only were the Växjö Lakers coming into the game having won two of their last three, they were also boasting the leagues top two point getters in Richard Gynge and Robert Rosén.

Despite having trouble getting shots on net against Malmö, Luleå was peppering Janis Kalnins right from the get go in this one as they outshot the Lakers 27-14 in the first two frames, including a 17 shot performance in the second frame. Despite the onsluaght of shots, Luleå managed to score just a pair of goals in the first two frames as Brendan Shinnimin and Konstantin Komarek were able to ripple the mesh and give Luleå the 2-0 lead heading into the final frame of regulation.

Despite being heavily outshot in the first two frames, the Lakers turned the table in the third and allowed just three shots on target while registering ten of their own, two of whic found the back of the net. Andrew Calof was able to break the shutout just over six minutes into the frame and Glenn Gustafsson followed that up almost excatly ten minutes later to tie the game at two. Unfortunately for Växjö, Luleå once again had a late game winner as Julius Honka tap home a beautiful feed from Juhani Tyrväinen with just 28 seconds remaining in the frame.

With the full six points this week, Luleå jumped from last in the league up to tenth. They will look to build on their streak this week with matchups against Djurgården and Brynäs. 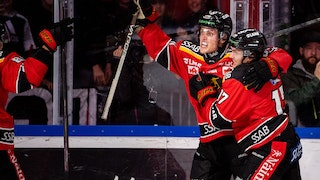 One of the biggest announcements of the week came from Leksand as they announced the extension of Matt Caito through the 2024 season. The 28 year old defenceman registered 4 goals and 27 assists in 51 games played in his first SHL season last year with Leksand. He has also been averaging 22 and a half minutes of ice time through nine games this season.

– Matt has grown into an important piece of the puzzle on our back end. He is one of the SHL's best two-way defenders and is a player who makes others better. Matt is a wonderful person who spreads joy and security in our locker room, and he also contributes with positive leadership that means a lot to our entire group, says Leksand's GM Thomas Johansson.

Another big announcement this week concerns long time SHLer Petter Emmanuelsson who made his debut with his new team in Finland. Emanuelsson joined Kärpat last week. Emanuelsson spent 10 seasons in the SHL, all with Luleå. He played 322 games and scored 69 goals and added 58 assists. 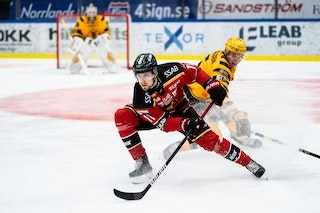 With Färjestad acquisition of Dominik Furch between the pipes, it means that Jesper Eliasson has been bumped from the full time roster. The 21 year old has been loaned to Altumna in HockeyAllsvenskan. However, should they need to, Färjestad can recall Eliasson at any point during the season.

Leland Irvings very brief stint in Sweden has come to an end. The 33 year old Canadian was signed to a short term contract with Malmö to cover while Oscar Alsenfelt was out due to injury. Now that Alsenfelt is once again healthy, Irving has been released. Irving did not see any action in his short time in the SHL and has now signed with HC Lugano in Switzerland.

The young Hugo Pettersson has been loaned from Växjö to Karlskoga in HockeyAllsvenskan. The 19 year old made his SHL debut and saw action in 4 games this season.

– Hugo is a promising forward who needs a lot of playing time. He will get that in Karlskoga, which will help him in his development, says Växjö's sports director Henrik Evertsson.

Some off ice new came this week concerning a former player. Alen Bibic rejoins Rögle as their newest member of corporate sales. Bibic made his SHL debut back in 2015/16 and played a toal of 170 games with Rögle. He played in Finland last season with TPS.

– It is clear that it is something new, but at the same time I think that if a person is to develop, one must jump into new things and this is a completely new world for me. I have always been curious about my civilian career. But it's clear I've been thinking, it's been a few sleepless nights now, if that's the right thing to do. You understand that it will come at some point, but you are thinking about whether to postpone it or not, says Alen Bibic.

Check out these weeks top goals