Despite the fact that most teams have less than four games remaining in the regular season, the race is still too tight to call all across the standings.

The week kicked off with a pair of games that had big implications for the race to stay out of the relegation series. Oskarshamn was visiting Frölunda and Brynäs played host to Örebro. Oskarshamns matchup against the Indians was a tight matchup throughout the first two and a half frames with Joe Cannata playing well between the pipes. Just a single goal in the first period for Oskarshamn looked like it might be enough to hold on for the win, but with five minutes remaining in the third, Frölunda turned on the afterburners and potted a trio of goals in just over three minutes. Having been outshot 31-20 in the game, including outshot 12-5 in the third frame, Oskarshamn could not hold off Frölunda and dropped a very important three points. Those three points were made all the more important given what happened in the other game on the night.

Just like in the FHC/IKO game this matchup only had a single goal in the first two frames. Greg Scott rippled the mesh in the second frame to give Brynäs the 1-0 lead. That lead was extended early in the third period as Oula Palve buried his tenth of the season. Örebro did manage to battle back with a goal from Borna Rendulic, but an empty netter late in the frame secured the big three point win for Brynäs. With the victory, Brynäs leap frogged over Oskarshamn and knocked them into a relegation position. However, both teams would be back at it on Thursday night with another chance to grab some much needed points.

Facing off against Leksand on Thursday night, Oskarshamn was desperate to redeem their loss. Unfortunately for them, Leksand was just to much for them to handle. Oskarshamn did show some resilience late in the third period as a goal with the net empty from Tyler Kelleher pulled them back within one, but they were unable to complete the comeback, dropping their second game in a row. The win for Leksand, however, was a big one as their hope for a top six finish benefitted greatly from the three points. 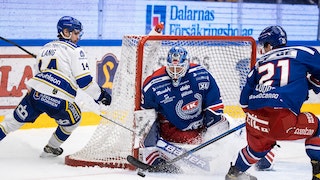 With the Oskarshamn loss, Brynäs had a prime opportunity to further extend their lead in the standings. Coming up against a Djurgården team they have had success against this season, they were looking to close out the season series with a win, Djurgården had other plans. Despite a goalless first frame, Djurgården came alive in the second and scored three goals in just over three and a half minutes, including a pair from Rhett Rakhshani. They'd follow that up with a fourth in the third period. Brynäs managed just a single goal in the final frame and dropped the game 4-1.

The only friday night game featured one of the best goaltender showdowns of the season as Oscar Alsenfelt and Christoffer Rifalk brought their A games. Just one goal was scored for each Malmö and Rögle and neither team was able to win it in overtime. Rögle heavily outshot the Redhawks in the game, hammering Alsenfelt with 42 shots on net. The great goaltending didn't stop at the end of the extra frame however, as the two goalies combined to stop 21 shooters in penalty shots. The deadlock was finally broken as Johan Olofsson slipped the game winner past Rifalk. With the win, Malmö tied their club record for most consecutive wins. The previous record of eight straight wins was set back in the 91/92 season.

The final game day of the week featured three Saturday afternoon matchups. Potentially the most important matchup of the day and perhaps the week was the game between Brynäs and HV71. Having fallen further behind in the standings recently, HV71 was desperate for a win as they were staring down the very real possibility of playing in the relegation series. Coming into the game HV71 sat 8 points back of both Brynäs and Oskarshamn and a loss would all but eliminate them from a top 12 finish. The first period did not yield offence from either team, however it took just two minutes into the second for HV71 to break the deadlock as Filip Sandberg scored the much needed go ahead goal. It was looking like that single goal might be enough for the win, but with less than five minutes remaining in the third period, Greg Scott rippled the mesh to tie the game and send it to overtime. The overtime frame did not yield a lot of chances for either team. However, with just sixteen seconds remaining in the extra frame John Nyberg scored the game winner to give Brynäs the extra point. With the loss HV71 now sit nine points back of Brynäs and eleven back of Linköping. Although not statistically guaranteed to finish in the botom two, there are just twelve potential points remaining for HV71. 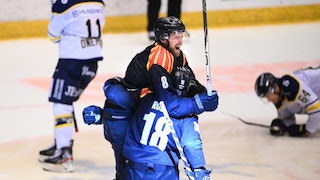 HV71 did get a bit of help from Skellefteå on Saturday as they were able to hand Oskarshamn their third straight loss with a 3-1 victory. The third and final game of the day was a matchup between Leksand and Luleå with Leksand squeaking out a 2-1 victory, which proved to be a big three points for them as they now sit fourth overall and their hopes of a top six finish become more of a reality.