Some teams keep momentum through the second week of play, while some other are struggling. Among the players, Marek Hrivik and Borna Rendulic are two of the scorers still on pace.

With most of the teams having played four games, Orebro Hockey and Lulea Hockey have created small cushion in the top of the standings. Lulea grabbed their two wins this past week by beating HV71 5-4 Thursday and following this up with a 2-1 victory against Vaxjo Saturday. What's notable is that 17 year old goalie prospect Jesper Wallstedt played his second SHL game in his career, having made his SHL debut on March 10. Back in March, Wallstedt played 38:47, stopping 17 out of 18 shots. On Saturday, he stopped 20 out 21 shots in his first 60 minute outing. 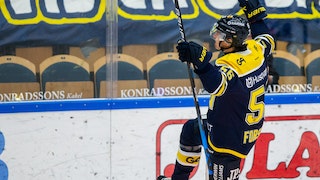 Orebro in general, and Borna Rendulic in particular, continue their surge early on. A 5-3 victory in Leksand on Thursday was followed up by a 6-4 win against Linkoping Saturday. With 20 goals for in four games, Orebro leads the league in pure goals scored and goals scored per game (5,00).

Two teams are still without a win in regulation. Linkoping did grab two points thanks to a late third period surge and an overtime winner by Jonas Holös against Brynas on Thursday. With the offense providing much firepower for Linkoping, they do have their woes in net, having let in 18 goals on 113 shots (ENG's included). Farjestad are still looking for both structure and some chemistry throughout the lineup. The Karlstad side came up with no points through the two games they played last week, losing to Oskarshamn Thursday and Malmo Saturday. Both losses ended 4-2. What is notable from the Saturday game is that three out of the four goals scored by Malmo came from defensemen.

For HV71, frowns turned to smiles when they broke a four game winless streak thanks to a massive comeback against Osarshamn on Saturday. The Jonkoping team went down both 1-0 and 3-1 before scoring five unanswered goals to win 6-3. They scored two goals in a span of 64 seconds in the end of the second period making it a 3-3 game heading into the third. 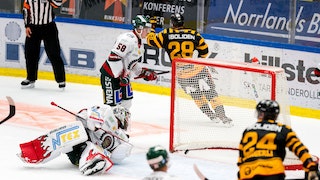 Leksand have had a decent start to their campaing, much thanks to their first line with Marek Hrivik, Peter Cehlarik and Carter Camper. Hrivik opened his season by notching eight assists in his first three games, which is something no other player since the 1999/2000 season have managed. On Saturday, the Slovak notched his first two goals of the season. Despite his double salvo, Leksand lost to Frolunda 4-2.

Through two weeks of play, Hrivik is the top scorer with 10 points (2-8--10), followed by Rendulic and team mates Carter Camper and Peter Cehlarik.

Through last week´s games, three players scored five points in two games; Daniel Zaar of Rogle, Broc Little of Linkoping and Mathias Bromé of Orebro. All of them had two goals and three assist respectively. Two players had a hat trick each and scored four goals in two games: Jesper Frodén of Skelleftea and Linus Oberg of Orebro.

This week, we are looking at almost two full game nights with seven games on Thurday and six games on Saturday. The one game between Malmo and Rogle originally scheduled for Tuesday has been postponed to a later date, to be announced.