The first period of action on Tuesday evening would see no scoring, however the second was a much different story. The two teams combined for 26 shots in the second frame, with Timrå putting 16 of those shots on target. Despite the amount of shots from Timrå, it was Djurgården who would pot the first two goals of the game with a pair of goals in quick succession. Not to be outdone Timrå would answer back in the later stages of the period with a quick pair of goals of their own. The game would head to the third locked at two.

Timrå continued to pepper the Djurgården net in the third frame with another 14 shots on target. Despite the onslaught it was, once again, Djurgården finding the back of the net first in the frame to regain the lead with just under six minutes remaining in the period. Unfortunately for Djurgården their lead would be short lived and Timrå would answer back a few minutes later, then secure the win by scoring with just seven seconds remaining in regulation. With the win Timrå increased their series lead to two games to none. 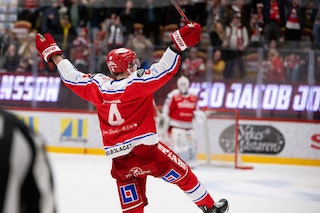 Timrå had an opportunity to take a strangle hold on the series on Thursday evening, and that's exactly what they did.

Scoring one goal in the first, two in the second and two in the third was enough to come away with the 5-3 victory over Djurgården. Despite losing, Djurgården played a solid game and put a total of 36 shots on target, but came up against a hot goaltender in Jacob Johansson who played well between the pipes.

Robin Hanzl also had a great performance for Timrå, scoring two goals and adding one assist, bringing his series total to six points. With the win Timrå was one victory away from securing their future in the SHL. Unfortunately for Djurgården, they had a monumental task ahead of them, one that no SHL team has ever accomplished before, come back from a 3-0 series defecit.

It was all on the line on Saturday as Djurgården was playing for their SHL lives and Timrå was looking to close out the series and complete the sweep.

The first period was fairly evenly matched with both teams registering a few chances, but neither was able to ripple the mesh in the opening twenty minutes. The second period, however, was a different story.

Robin Hanzl would continue his scoring streak as he opened the scoring in the second period, followed closely by a goal from Ty Rattie. Hanzl would score, once again, in the final minute of the second to give Timrå the comfortable 3-0 lead heading into the final twenty minutes of regulation.

The third period was fairly quiet on the scoreboard and it looked like Timrå was going to come away with the shutout victory. However, William Eklund managed to score a goal for Djurgården with less than a minute remaining. It was to little to late for Djurgården as Timrå would hold on for the 3-1 victory and complete the series sweep. With the loss Djurgården will find themselves playing in HockeyAllsvenskan next season for the first time since 2014. 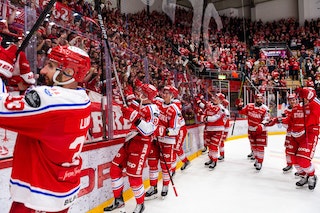 Joakim Ryan finished his first season with the Malmö Redhawks and his first season in the SHL. The 28 year old defenseman played the entire season and scored 9 goals and added 22 assists. Impressed with his performance this season, Malmö has inked him to a new two year contract.

– Joakim is a really good player that we have always had an ambition to keep. Of course, it feels very good that is now reality. He got more into Swedish hockey the longer the season went and during the second half of it he was one of the leagues best defenders, says Malmö's sports director Patrik Sylvegård.

There was a lot of movement in Linköping this week as they announced that David Rautio, Roberts Mamcics, Jimmy Andersson and Brian Gibbons will not be returning to the club next season.

They also announced that they have signed a trio of young prospects to big team contracts. Defenseman Jonathan Myrenberg and Mattias Hävelid and forward Filip Bystedt have all signed rookie contracts with LHC.

– Huge to sign my first senior contract and take the next step in hockey life. It has been fun to try SHL hockey during the season, it has given me an idea of what it takes to play at this level, says Mattias Hävelid.

Myrenberg has signed on through 2024 while the other two signed contracts that will see them remain with Linköping until the end of the 2024/25 season. 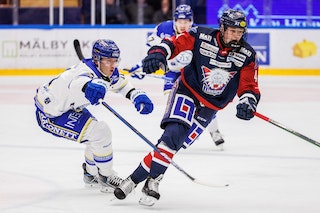 Some off ice news coming out of Timrå this week and General Manager Kent Norberg announced he will not be returning to the team next season.

– Kent's desire to be released from his contract to move on to new challenges and the association's goal of renewing the sports organization coincided. We have great faith in the organization's ability to handle the situation that has arisen. The player squad for SHL 22-23 is largely finished, only details remain to make it complete, says Lars Backlund, chairman of the board in Timrå.

Norberg had over 18 seasons as the GM of Timrå but will now move into the position with HV71. The new deal is for the next three seasons.

Some more off ice news this week came out of Malmö as they announced they have signed Head Coach Tomas Kollar to a new three year deal.

– Of course we are very happy to be able to sign Tomas over the next three seasons. He has already had time to show that he is a really good coach and I see a future head coach in him. He is thorough, energetic and has a very good hockey eye, says Malmö's sports director Patrik Sylvegård.

No surprise that Noel Gunler has been offered an NHL contract for next season. He was drafted 41st overall in in 2020 by the Carolina Hurricanes who have now signed him to a three year entry level contract.

Gunler scored 13 goals and added 10 assists in a full 52 game season this year. 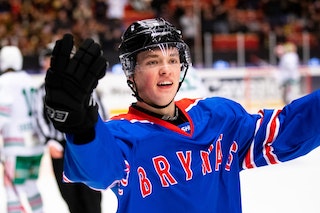 – I have played and worked with many good team captains through my years. Zacke is the best among these and I am extremely happy that Patrik wants to continue with us. In addition to being a really good captain, he is also an incredibly competent hockey player who works extremely hard for the team, says Leksand's GM Thomas Johansson.

The new contract will see Zackrisson stay in Leksand through the end of the 2024/25 season.

Candidates to Goal of the Year:

and Save of the Year: