Another week gone by, with Frölunda moving into first place. Covid-19 is causing concerns in teams and regarding schedule. And one team is in big trouble. Here's what happened last week in the SHL.

First things first. With Covid-19 finding their way into a few teams, there has been schedule movements making the standings look the way it looks with big differences between games played by teams. During the week, it was reported that Covid had hit Linköping and Djurgården hard, forcing their games to be moved.

As for the games played last week, one team had a perfect record. Rögle went two for two, claiming all six points thanks to two 5-4 wins. On Thursday, they overcame Frölunda and on Saturday Rögle beat Skelleftå in the same fashion. What is noticable is that no Rögle player had more than three points during the week, despite the team scoring ten goals. However, five players ended up with exactly three points; Dennis Everberg (3-0--3), Anton Bengtsson (2-1--3), Moritz Seider and Éric Gélinas (both with 1-2--3) and Mattias Sjögren (0-3--3). With those six points in the bag, Rögle now sits in third with 22 points, four points ahead of fourth placed Skellefteå and one point behind first-place Frölunda, with a game in hand. 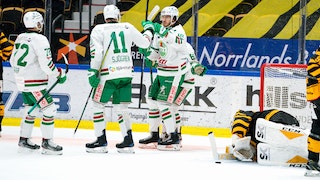 Frölunda played three games last week, winning two. On Tuesday, they brushed aside Malmö 6-2 before falling to Rögle 5-4 Thursday. However they bounced back with a commanding 4-1 victory agains Luleå Saturday, thereby passing the Norrbotten side in the standings. Max Friberg and Joel Lundqvist scored five points each last week, Friberg had three goals and Lundqvist two.

Among the middling teams, Leksand had a rollercoaster week, starting off with a 3-2 overtime win against Djurgården at home, before falling 5-2 to Luleå. They ended the week with another 3-2 overtime win at home, this time against Färjestad, making it three 3-2 OT wins at home in a row for the blue and whites.

Due to Covid and schedules, five teams only played one game last week. Both Oskarshamn and HV71 won their games. HV71 beat Brynäs 6-4 at home, maintaining their unbeaten record at home. On the other hand, they have yet to grab a point away from Husqvarna Garden.

Goalie shutouts are coming in sparse this season. No goalie completed a shutout last week, but on the other hand, some players upfront are having a field day. Marek Hrivik of Leksand and Jonatan Berggren are topping the passing game with 14 assists each. In terms of scoring, Jesper Frödén (Skellefteå), Daniel Viksten (Färjestad) and Peter Cehlarik (Leksand) have scored eight goals each. 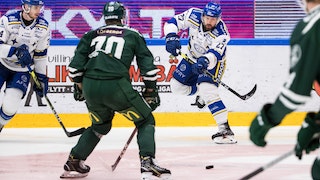 As for this past week, Viksten and Everberg joins Richard Gynge, Max Friberg and Peter Cehlarik with three goals each. Jacob Nilsson (Färjestad) and Joel Persson (Växjö) had four assists each. Both Johannes Kinnvall and Jonatan Berggren had three assists in the one game they played.

This coming week, the SHL sees action with five games Tuesday and, as of now, six games Thursday. The game between Linköping and Malmö was postponed on Monday morning. As for the Djurgården - Färjestad game Thursday, a decision will be made Tuesday. Saturday has a full slate of games planned as of now.